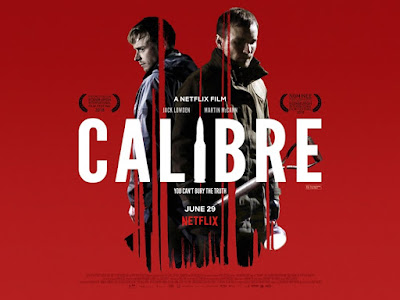 Set in the picturesque Scottish Highlands, Matt Palmer’s debut feature Calibre (2018) takes a familiar genre plot-line and constructs an engrossing thriller out of it. City folks going out into the middle of nowhere and having their sense of morality questioned by the locals’ behavior was the kind of narrative thread that has been predominantly recycled for thriller genre pieces. The earlier masterworks like ‘Deliverance’, ‘Straw Dogs’, and ‘Wake in Fright’ laid bare menacing as well as bruised male psyche in a hostile countryside environment. ‘Eden Lake’, ‘The Hills Have Eyes’, ‘Them’, ‘In Fear’ were some of the fairly good recent projects (a bit of a low-IQ thrillers) that follows the well-tread path to produce chilling cinematic experience. Calibre sort of takes a revisionist approach by examining the unrelenting male psyche of city and country folks in a balanced manner. The lines between good and bad are blurred, and everyone’s action seems understandable from their closed-in perspective.

Ahead of its global launch on Netflix, Calibre won the prestigious' Michael Powell Award' (for Best British Feature) at Edinburgh International Film Festival. For director Matt Palmer who smartly side-steps obvious cliches of the genre this could be a good calling card. Jack Lowden who was recently seen in ‘Dunkirk’ and ‘’71’ plays Vaughn Carter, a young man caught in a state of bliss since his beloved girlfriend is pregnant with their first child. Martin McCann of ‘The Survivalist’ plays Marcus, Vaughn’s long-time friend from the boarding school days. Marcus with his feral-looks and impish grin is a bit of a man-child. He convinces Vaughn to go on a hunting trip with him to the Scottish Highlands. Marcus brands it as the final weekend of fun before the onslaught of domestic duties. Vaughn isn’t much interested in hunting but allows his foolhardy buddy to do his own thing. Marcus snorts cocaine, drinks and chats up with a girl in the local pub. 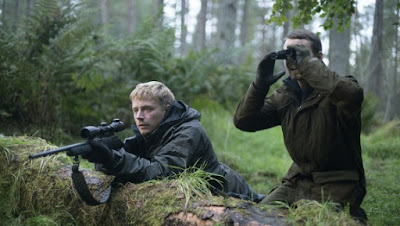 Vaughn also meets a girl in the pub, named Iona (Kate Bracken), but he manages to stay faithful to his girlfriend. They both just drink all through the night and Vaughn wakes with a hangover. Marcus’ antics naturally lands him in trouble with the locals. However, the friends face a much distressing problem once they walk into the deep woods for deer-hunting. Vaughn spots the deer and Marcus cajoles him to shoot it. Vaughn locks the target in his scope but he hesitates for a moment. Finally he takes a shot. Alas, the .22 bullet finds its way into a different target, one that may bring the unbridled wrath of the local Highlanders. More panicked decisions and bad luck follow the initial awry incident. The chain of events gradually turns the trip into one long nightmare for Vaughn and Marcus.

Cinematographer Mark Gyori and director Matt Palmer does an excellent job in turning the vast expanse of Highlands into something claustrophobic and suffocating. The two central characters’ sense of entrapment is perfectly highlighted by the deep forests and the wood-paneled walls of pub and inn (the hunting trophies that adorn the inn’s walls generate an extra dose of eeriness). Despite the familiar narrative structure, Palmer’s visual acuity manages to breathe in tension throughout. The acute wide-shots, the ominous dissolves, and the panic-stricken hand-held shots make the disquiet more palpable. Palmer also effectively captures the fractured mindset of Vaughn, racked with blame, without resorting to flashy, repetitive shots of the pivotal incident (Vaughn writhes in the bed and the camera doesn’t cut to show what he feels and simply stays on him; little differences from the traditional visual language that dodges the clichés). Calibre also gains a lot from good writing that’s fairly rooted in reality. 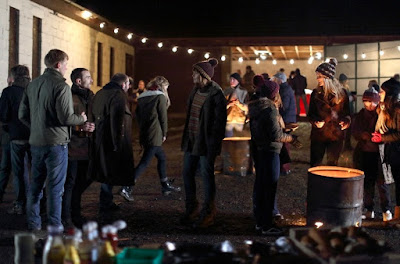 Palmer doesn’t over-complicate the duo’s situation and avoids the temptation to turning the locals into bunch of savages. Tony Curran’s Logan McClay, the important local figure keen to dispel the town’s economic misfortunes, exudes resilience and forbearance that’s even missing from the central characters. The invitation for bonfire in the final-act made me think that the narrative would take ‘Wicker Man’ territory, but Palmer moves to the stark climax in an organic manner. The ending could be perceived as little rushed, considering how the psychological horror elements were given lesser time to mature (so as to firmly support that devastating final choice), even though it’s grip over the time-worn plot doesn’t loosen entirely. And the very last distressing scene (the ravaged stare) finely works as homage to a similar scene in John Boorman’s Deliverance. The performances are all top-notch. Lowden’s dewy-eyed stance and charisma effortlessly elevates the narrative’s inherent moral complications. McCann with his Fassbender-ish expression of malice instills due edginess to the proceedings.

Calibre (101 minutes) takes a simple ‘trip-to-the-woods-turns-tragic’ idea and through well-balanced character sketches and skillful direction manages to transform it into a taut thriller.

at July 03, 2018
Email ThisBlogThis!Share to TwitterShare to FacebookShare to Pinterest
Labels: 2018 Movies, Thriller