Tickets [2005] – One Journey and Three Nuanced Tales of Self-Discovery 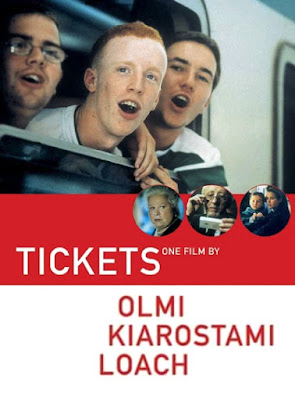 A train journey offers a host of amusing possibilities. A train environment possesses wider social canvas, through which we get to learn different human contexts, discover friendships, and renew hope in humankind. In cinema, train has always been a significant backdrop. We cannot understand the terror the audience of 1896 must have felt when they saw Lumiere Brothers’ short black-and-white silent clip of a train rushing on to the platform of a station (the audience thought the train might burst out of the screen). From silent comedy masterpiece (The General) to Hitchcockian suspense (The Lady Vanishes) to the recent action thrillers like Snowpiercer & Train to Busan, trains were used as the perfect tools to generate the thrill of genre pictures. But rarely do we get to see a picture like Tickets (2005), which uses train as more than a genre attraction. It rather explores the transitioning inner emotions of people on the move.

‘Tickets’ (2005) is a portmanteau film, popularized by the old European film-makers (from 40s through 60s). Portmanteau films (or anthology films) are made up of two or more stories (each section directed by different film-makers) that mildly interrelate (and unified by same theme or genre). Making portmanteau films are bit tricky, since some directors may not respond better to the short-format challenge and as a result ruin viewers’ interest. Helmed by three renowned humanist film-makers Ermanno Olmi, Abbas Kiarostami, and Ken Loach, ‘Tickets’ is blessed by the perfect unison of a humanist vision. Despite the differences in style and subject matter, there’s none of the uneven tone that plagues portmanteau films (Wild Tales is the best recent indication that portmanteau films aren’t wholly dead). 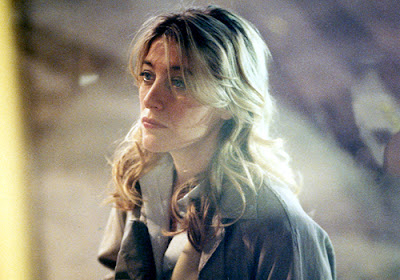 The project originated from the mind of Iranian film-maker Abbas Kiarostami who suggested to his producers Carlo Crest-Dina and Babak Karimi about making three stories, linked by common themes. Kiarostami personally favored Olmi and Loach. Their mutual admiration of each other’s works initiated the project (first the idea was to make three segments of a documentary, but latter turned into a single, fictional feature). The three stories in the film are written in order (by Olmi, Kiarostami and Loach’s long-time screenwriter Paul Laverty), giving ample space for directors to build on the presented themes. The three stories are set in one train journey, from Central Europe to Rome. Although the characters in these different stories exist in their own isolated world, they form to be vital elements of a larger beautiful canvas.

In director Olmi’s opening story, an elderly professor/scientist (Carlo Della Piane) reflects on the moments he just shared with the PR woman (Valerie Bruni-Tedeschi). The professor takes the woman’s friendly and charming nature and thinks of it as a possibility for romance. The memories of the past plus the idiosyncratic behaviors of the dining-car passengers interrupt the professor’s thoughts about the woman (kudos to gorgeous editing). He stops typing his business report on the laptop and opens a file to write a passionate letter for her. Olmi’s graceful direction gradually puts us in the perspective of the old man, riddled with hushed emotions. The professor also often takes a glimpse at a poor (Albanian) family, holding a crying baby, standing at the small space between the dining-car compartments. Since the professor’s romantic dreams are partly influenced by the images and sounds he hears around him, we wonder about the significance of this poor family at the compartment door-step. The director subtly plays with all these elements and weaves a kind of closure that’s nothing short of brilliant. 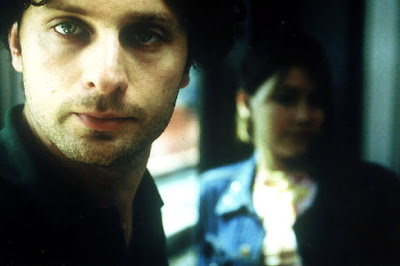 The middle story, directed by Kiarostami, revolves around a young man (Filippo Trojano) and a nagging old woman (Silvana De Santis). Their relationship isn’t very clear. They are traveling to Rome with second-class tickets, but occupy couple of reserved first-class tickets. The old woman’s demanding character nature is initially established with the verbal fight she has with another passenger. Filippo, who needs some breathing space, strikes up conversation with a smart 14 year old girl. The girl recognizes him since they are from the same town of Bracciano. Mr. Kiarostami extraordinarily makes use of first-person perspective (reminding us his 2002 film Ten) to dwell on the theme of detachment. It’s a very simple story with nothing dramatic, yet in the hands of Kiarostami, every gesture and dialogue looks compelling (also Kiarostami once again proves how language barrier isn’t a big thing for his humanist works).

The final section, directed by Ken Loach, is the most exuberant of the three. The characters are three Scottish young men & ardent Celtic supporters (Martin Compston, Gary Maitland, and William Ruane), traveling to Rome to see their team play in Champions League Final. They are just ordinary lads, working in a supermarket in Glasgow and must have rummaged through their savings to make this long trip. We are introduced to the characters through the typical but enjoyable brash talk (full of Glaswegian swear words). Their kindness is revealed as they share sandwiches with an Albanian boy. They chat with him and are delighted to know that the boy loves football. The Scottish trio give away sandwiches to the boy’s family (the same Albanian family we saw in the first story), comprised of a pretty elder sister, mother, grandmother, and the little baby. Mr. Loach earlier strikes off our preordained image about European football fans being prejudiced over the presence of immigrants. So, when they encounter a problem, which may or may not be caused by the Albanian family, it sets off a complex moral dilemma. 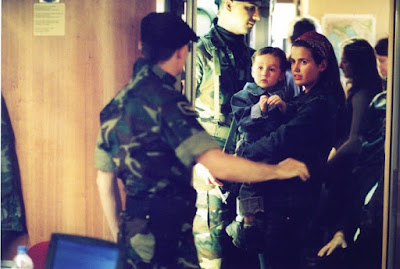 The film works largely due to the myriad ways the directors explore the profound thematic concerns. The themes examined ranged between class conflict, isolation, misconception, lack of communication, self-awakening, fear, memories, and human frailty. Yet, the directors don’t shove any particular themes on us through insipid dialogues. They let the themes unfurl in their own pace and style, and through their choice of characterizations. The result is a powerful and genuine study on the human condition. Moreover, the vibrant people in the three tales become microcosm of the dilemmas, agony, and pleasure we ourselves feel in a simple journey. The film is replete with small yet vital humane gestures. If our life is like a train journey, its beauty and importance lies in the showcase of love, empathy and sensitivity. A mere document of passage called ticket gives the characters a decision to make which may slightly transform their lives, or at least their preoccupations. The simple yet vital human gesture of the professor, the gentle conversation between Filippo and the teenager, the suspicions and sacrifices of the Celtic fans conveys a lot about our enduring humanity and the age we live in (marked by fear of terrorism, moral apathy, and alienation).

Often in portmanteau or anthology features, one tale would champion over others or falter so as to set up an erratic tone. It doesn’t happen with Tickets. Each tale is blessed with subtle directorial touches and naturalistic performances that it becomes hard to answer the question: which one’s the best? The first time I saw Tickets, I very much loved Ken Loach’s part, especially for its earthy and humorous tone (I was so elated by the final sequence). But after repeat viewings, I must confide that all the three tales are equally brilliant.

‘Tickets’ (109 minutes) is uniformly engaging and very rich in character as well as thematic details. These loosely inter-related tales may not be the greatest works of the three great auteurs. Nevertheless, this collective work on the ebb and flow of human connections is one of the very best portmanteau films ever made.

at July 31, 2018
Email ThisBlogThis!Share to TwitterShare to FacebookShare to Pinterest
Labels: Social Drama