Tehran Taboo [2017] – The Heinous Secrets of a Morally Rigid Society 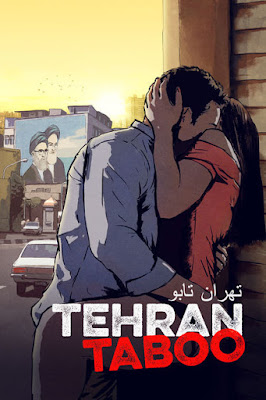 Iranian born German film-maker Ali Soozandeh’s Tehran Taboo (2017) offers a searing, eye-opening portrait of Iran’s police state. Considering the subject matter and censorship in place, the movie couldn’t be naturally shot in the streets of Tehran. Hence, Mr. Ali has chosen the medium of animation, creating the bustling capital city through computer imagery and further bestowing a realistic dimension by rotoscope style animation (live-action image of real actors, shot against a green screen, are placed inside the animated layers; Richard Linklater used it artfully in Waking Life & A Scanner Darkly). Rotoscoping drives the aesthetics towards realism without entirely losing its dreamy effect. Moreover, this technique perfectly works since the live-action footage would remain too blunt for the shocking material.

Tehran Taboo takes a dip into the ugly innards of Iran’s capital city, unveiling the hypocrisy and debauchery thriving under the mask of religious strictness and sexual morality. It’s a triptych of interconnected stories, presenting the deeply corrupted hidden face of the society, from the perspective of three women. The plot-line might remind us of Jafar Panahi’s The Circle (2000) which showcased the plight of different women in an extremely oppressive sexist Iranian society. Nevertheless, Ali Soozandeh unlike the Iran-based film-makers talks about the taboos directly and delineates the sexual restrictions through the astutely staged scenarios. The movie opens with a woman performing an oral sex on a cabbie driving his car (after accepting cash), while the woman’s young mute son is impassively sitting in the backseat. When the cabbie notices his daughter walking down the street, holding a young man’s hand he rages and crashes his taxi. This hard-hitting tone practically sets the tone for the rest of the narrative.

Pari (Elmira Rafizadeh) has to take care of her mute little boy Elias (Bilal Yasar) as her husband is imprisoned on drug charges. He is sentenced to life, but refuses to divorce her or provide signed document that may allow her to take a job or enroll her son in a school. Pari approaches a judge of the Islamic Revolutionary Court. The judge in turn offers a simple proposition: to be his kept woman, in exchange for living in a new upscale apartment. For groceries and other costs, she could service her other clients. Despite the terrible situation, Pari remains undeterred and does whatever it takes for the well-being of her son. Sara (Zarhra Amir Ebrahimi), Pari’s new neighbor, is a pregnant woman married to a banker. Her desire is to work. But her husband is reluctant to sign the document that would give her the permission. Therefore, Sara is pinned down to do the household duties and take care of her pestering in-laws. Struggling musician and student Babak (Arash Marandi) also lives in the same housing block, who makes love to a young woman named Donya (Negar Mona Alizadeh) in the nightclub toilet after taking few drinks and drugs. She calls him the next day and informs that he has deflowered her, and if her fiance finds out he would murder them both. Babak promises to pay Donya for the hymen-reconstruction surgery (an underground business) and now forced to make some quick money. Percolating the lives of these four connected characters are the fury-inducing double standards of the morally rigid Iranian society. 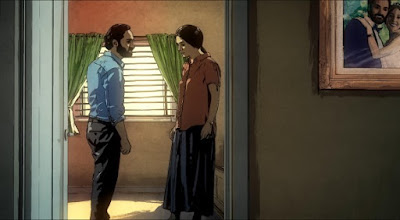 Director Soozandeh’s critique of the dark, hidden world resulting from Iran’s cultural policies suffers a bit from overwrought plotting (especially in the final act). But the film’s technical accomplishment with its poetic interludes is nothing short of astounding. It’s a great testament to the medium’s ability and cinematographer Martin Gschlacht’s sharp compositions that the computer-generated Tehran itself feels like a character, popping to life with colorful hues. The movie is at its best when it goes for visual poetics, not particularly concerned with the plot trajectory. Soozandeh’s focus lingers on intriguing specific details: like Elias using his mother’s condom as water balloon and dropping it out of balcony for fun; burger ads in the radio; the litter of kittens concealed within the narrow spaces of the high-rise; the recurrent shots of flying birds foreboding the sad and heart-breaking denouement; scenes set inside a photo studio, where all the four characters get their portrait taken as a off-the-screen photographer blandly asks about the occasion for the photograph (single viewing isn’t enough to comprehend the meaning of some of the tangled metaphors). The director is also fascinated with balconies as if it’s the only private space far removed from the prying looks of the oppressive theocratic society. 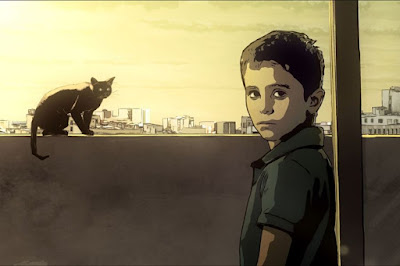 Although the narrative is bleak and tragic, there are certain comic overtones, especially with Babak’s attempt to restore Donya’s virginity. There’s a kind of absurdist humor in the manner Pari takes up the sleazy judge’s offer (and also when two women talk about men in a balcony over a dirty martini). In fact, the farcical wit and slightly softening effect of rotoscoping gracefully melds the harsher aspects of the story-line. Soozandeh largely doesn’t intend to make heroes or martyrs out of his women characters. They are rather shown as flawed individuals, possessing all the understandable human desires, but traumatized by an uncaring system. At the same time, Soozandeh doesn’t take pains to humanize the elderly male characters (all of them come across as villains). The black-mailing janitor, Sara’s father in-law who watches porn and swiftly switches to religious speech once a family member walks into the room, the deviant judge are all used to personify the previous old generation in a unpleasant manner, questioning them for succumbing to religious fundamentalism. Such characterizations allow the narrative to belabor its view so as to make it teeter towards one-dimensional melodrama. But for all those minor flaws, Tehran Taboo (95 minutes) deftly focuses on the morbid realities of civilian life in a society where hypocrisy, fear, and repressive paradoxical laws reign.

Your movie review gives a peek into a different side of Tehran,Iran.

Thanx for your hard work that you do to bring forward the different facets of world cinema for your readers.

This seems to be an interesting movie because it shows the real faces of religion hidden behind holy masks.

Thanks for the comment Neeraj. Do see the movie and convey your thoughts.