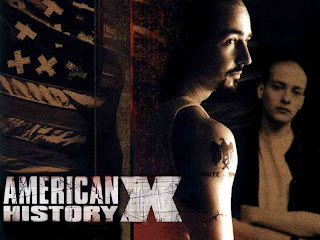 American History X is clearly a controversial film dealing with the social topic of racism. The interesting thing about this film is the way in which the subject is presented. The film dares to address America's neo-Nazi culture, with a brutal honesty.
Racism is always a difficult subject to deal, but  American History X presents it without any reservations. Secondly, Derek Vinyard(Edward norton), is not an unintelligent  racist as films often portray them, but is in fact well-spoken, charismatic and bright, although he clearly holds ideals that are terribly wrong. Finally, it shows that it is not the white, who are fools for being involved in this, but all those who hold hatred in their hearts.

American History X gives a strong view of how the teachings of parents, friends and the laws of our government can negatively affect, confuse, and frustrate the youth in today's society.  Hurting people and destroying property does not solve problems, but only makes them worse by causing more resentment and tension between people. Good things come out of situations where people show hospitality, good will, and compassion; not hatred.

Why we hate a race or a community?, because we want to blame someone else for our misfortunes. We are not born with hatred; it is a learned behavior. I'd like to finish with a apt quote, from the movie:

"Hate is baggage. Life's too short to be pissed off all the time. It's just not worth it."
Trailer:

Very true. Maybe a movie like this should be made for India too. But, considering the political clout and how sensitive some religions are, it's highly unlikely such a project will see the light of day in India.

this is one movie that ripped my gut out! as you said, shockingly powerful

Excellent movie:).Edward norton gives one of his best performances:).