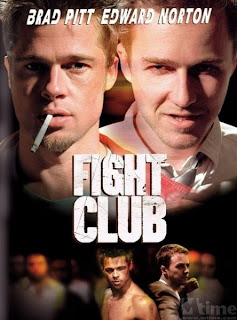 "You are not your job. You are not how much you have in the bank. You are not the contents of your wallet." With its kinetic style, visceral approach, compelling storyline, and powerful social message, Fight Club plays with your perceptions about movies and society. The film leads the viewer off on a merry chase with numerous flashbacks, starting at the end, going back to the beginning, and then breathlessly zig-zagging back to the end.

During a lengthy business trip, our lead meets up with designer soap maker Tyler Durden (Brad Pitt). They strike up an awkward friendship that finds the duo eventually living together in a run down house on the edge of town. From there, they begin something called ‘Fight Club’ - a weekly meeting where men can get together and blow off their frustrations and fears in a flurry of fists to the faces. Then, it is up to us to discover Tyler’s motives, his true identity, and how an aggressive type of  male bonding turned into a terrorist organization.


David Fincher's  gritty, restless style turns it into a visual masterpiece.Even before the film's official premiere, voices have been raised claiming that the movie glorifies violence by portraying it as something positive.
There's no denying that Fight Club is a violent movie. Some sequences are so brutal that a portion of the viewing audience will turn away. But the purpose of showing all this bloody striking is to make a point about the bestial nature of man and what can happen when the numbing effects of day-to-day drudgery cause people to go a little crazy.

Consumer-based culture has ruined our individualism and values associated with being a man. Corporations have replaced personal qualities with corporate logos. The modern male cannot be anything unless he has certain products in his possession.

In the movie Tyler Durden (Brad Pitt) comments on the new way of life, "We are products of lifestyle obsession. Murder, crime, poverty do not concern me. What concerns me are celebrity magazines, television with five hundred channels." So, the movie remains a lesson to be studied and learned.

If u want to know more about the different perceptions, other than literal one, in Fight Club and other movies, read this:   Allegory In Movies


“This is your life and it's ending one minute at a time.”
“It is only after we've lost everything that we are free to do anything.”
"You are not special. You are not a beautiful or unique snowflake. You are the    same decaying organic  matter as  everything else."
“Materialism is dangerous. It doesn't take long before the stuff that you own starts owning you.”
Trailer :

One of my fav movies:). excellent script:) and dialogues:).

This is how a movie review has to be. I'm never satisfied about the mundane reviews that we happen to see quite a lot every where in the net. Those are not more than tell-the-tale-in- your-words. You're slowly getting into the inner layers of cinema rather than gazing at its tip. This leaves me glad.

Concentrate more on this. May your posts help and guide the readers to involve and appreciate the cinema with all it colors and textures. Just giving them the plot is enough- an appreciable idea indeed.

Articulation of words are at the best, dude!

bradpitt had played a tremendous role in fight club