The Pursuit of Happyness : A Touching Story of Perseverance And Commitment 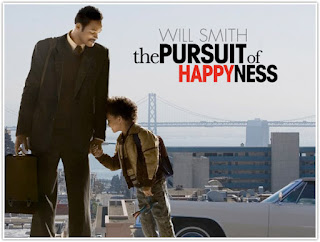 "Don't ever let somebody tell you you can't do something." Based on the real life story of Chris Gardner, the fact-inspired drama "The Pursuit of Happyness"(deliberately misspelled), looks at the ups and downs in Chris' life on his way to becoming a stock broker, and eventually as everyone knows, a multi-millionaire. A quietly agonized drama of reaching and missing and reaching again, it takes place in between the American dream and its nightmare shadow. It's a fine film, with a portrait of fatherhood that feels driven and real.

Plot
Chris Gardner (Will Smith) is a bright and talented, but marginally employed salesman. Struggling to make ends meet, Gardner finds himself and his five-year-old son(Jaden Smith) evicted from their San Francisco apartment with nowhere to go. When Gardner lands an internship at a prestigious stock brokerage firm, he and his son endure many hardships, including living in shelters, in pursuit of his dream of a better life for the two of them.

Analysis
At one level, even though the movie is titled The Pursuit of Happyness, it is pretty depressing. Yes, the movie is supposed to focus on the struggles of the main protagonist as he chases what seems like a dream. However, every time you think that things are going to get better, they only get even worse for Chris. As Chris and his son move from one slump to another, you begin to wonder is there truly light at the end of the tunnel for this man?

But the picture’s ending — which is satisfying, possibly even happy, depending on how you look at it — is almost inconsequential; it’s the texture of everything leading up to it that matters.  For the most part, the movie is Will Smith's showcase of talents, and he throws his all into the role. The younger Smith is allowed to deliver a natural, childlike performance. The director, Gabriele Muccino moves us from one intense scene to the next with a carefully fine-tuned sense of melodrama.

Some people will see “The Pursuit of Happyness” as a glorification of capitalism, but the movie is much less about “getting” than it is about “not having.” In the movie, Chris opens his wallet, and we see a five and three ones. That equals a cab ride for the company executive, but it may be all Chris has left for a day’s worth of meals for his kid. Chris hesitates before handing over the five, and the executive plucks it out of his hand gratefully.
This small moment may be the most painful one in the movie, perhaps because Smith plays it with such wry, — and because the executive has no idea of the harm he’s doing. But in this generous-spirited picture, the guy eventually remembers to give the five back, even though by that point, Chris doesn’t need it so badly.

Five bucks is five bucks, except when it’s all the money in the world.

"You got a dream, you gotta protect it... If you want something, go get it. Period."


"Don't ever let somebody tell you you can't do something."

u rarely get to see someone portraying the character and emotions so well. will smith just rocked.

this is one of fav movies... the char of chris is so inspirational

This is one of my favorite movies of all times! Everyone should see this once, when they are down with something.