It's A Wonderful Life - Holiday Classsic 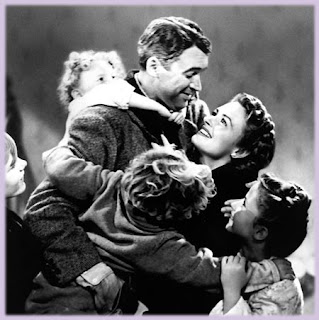 It's a Wonderful Life is one of today's most popular Christmas films. One could use It’s a Wonderful Life to teach their children values—compassion, selflessness, loyalty, and self-respect, among many others that the film preaches without being, well, preachy. The story not only stands strong half a century later, but it continues to show up today's formulaic Hollywood films for the mindless use of celluloid that they are.

Plot
George Bailey (Stewart) has so many problems that he is thinking about ending it all - and on Christmas! As the angels discuss George, the film shows his life in flashbacks. As George is about to jump from a bridge, he ends up rescued by his guardian angel, Clarence. Clarence then shows George what his town would have looked like if he hadn't been born or if it hadn't been for all his good deeds over the years. Will Clarence be able to convince George to return to his family and forget about suicide?

Analysis
The direction from Frank Capra is excellent, sensitive and nuanced, and Capra shows even more talent as a screenwriter having penned one of the most honest and touching scripts ever in a film. This was the first movie Capra made after returning from service in World War II, and he wanted it to be special--a celebration of the lives. The acting is wonderful. James Stewart is absolutely superb as George Bailey, a truly complex character who goes through such a lot to get to where he is at the end of the movie. The supporting cast is both excellent and memorableFor a good morality tale, you need a good villain. Well in the name of Potter, you have one. Visually, the film is a wonder. I don't think it is dated at all, the cinematography is crisp, the black and white looks beautiful and the pure Christmas scenery is very genuine.

What is it about this film, an uplifting, sentimental allegory about the importance of the individual, that strikes a responsive chord with so many viewers? Some might argue that it has something to do with the season, but that's not the real reason. it effectively touches upon one basic truth of life that we all would like to believe -- that each of us, no matter how apparently insignificant, has the power to make a difference, and that the measure of our humanity has nothing to do with fame or money, but with how we live our life on a day-to-day basis.

By Hollywood standards, the original release of “It’s A Wonderful Life” in 1946 was a box office disappointment. The film cost around 3.7 million to make, but only generated 3.3 million in its initial run.

It's a Wonderful life is an inspirational movie to warm the coldest hearts. It isn't just a holiday favorite, but a great movie by almost any standards. Whether you view this film at Christmas or any-other time, Capra's greatest film represents one of the most exceptional  and joyful experiences any movie-lover can hope for.

If u are going to watch one black & white movie in your life let it be this.
Memorable Quotes:
"Strange, isn't it? Each man's life touches so many other lives. When he isn't around he leaves an awful hole, doesn't he?."
"Dear George, remember no man is a failure who has friends."
Trailer :
It's A Wonderful Life - Imdb
at December 25, 2011
Email ThisBlogThis!Share to TwitterShare to FacebookShare to Pinterest
Labels: Family Drama, Feel Good Movies, Hollywood Movies, IMDb Top 250

Man I love this movie. It deserves its place on top of the imdb 250.

I want to watch this movie! I have to take it from my friend soon