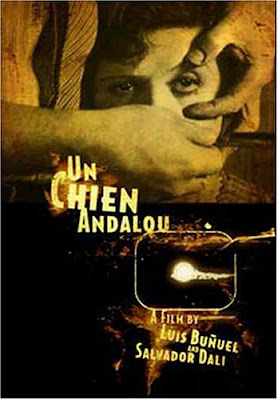 Luis Buñuel began his movie career with the most notorious opening sequence in movie history. Un Chien Andalou, a seventeen-minute movie collaboration between Buñuel and his then pal Salvador Dalí first sprang on the world in late 1929.

It must also rank as one of the most studied films in history, and a myriad number of critiques adopted various theories about the imagery. But no interpretation can be regarded as definitive--especially considering Buñuel's stated purpose:

"No idea or image that might lend itself to a rational explanation of any kind would be accepted. We had to open all doors to the irrational and keep only those images that surprised us, without trying to explain why."
Shocking And Surrealistic Images
Buñuel kicks off the film with the most astonishing, unforgettable opening scene of any film, and appears as the barber who takes a razor to a woman's eye. The filmmakers ingeniously cut away to a slender cloud slicing across the face of the moon, and then cut back to an extreme close-up of a cow's eye. Other great images include the ants crawling on the hand (Dali's idea), and a man massaging a girl's breasts as her clothes disappear and re-appear. The film has the effect of washing over you like a long dream, and some images will linger longer than others. But no one ever forgets the eye.

The producer-director of the film, Bunuel wrote the scenario in collaboration with the painter, Dali. By surrealistic principle, Dali and Bunuel sought to combine images so that one would bear on logical or rational connection to the next. Both took their point of view from a dream image, which, in its turn, probed others by the same process until the whole took form as a continuity. It should be noted that when the image or idea appeared the collaborators discarded it immediately if it was derived from remembrance, or from their cultural pattern or if, simply, it had a conscious association with another earlier idea.

They accepted only those representations as valid which, though they moved them profoundly, had no possible explanation. Naturally, they dispensed with the restraints of customary morality and of reason. The motivation of the images was, or meant to be, purely irrational. They are as mysterious and inexplicable to the two collaborators as to the spectator. Nothing in the film symbolizes anything. The only method of investigation of the symbols would be perhaps, Psychoanalysis.


Dismissal of Narratives
What Dali and Bunuel achieved through the method of compiling a scenario was the liberation of their material from the demands of narrative continuity. Far from being puzzling, the film achieves the clarity of a dream. The extremity of the violence and calculated abruptness of changes of time, place, and mood intensify the viewing experience without satisfying the conventional narrative demands of cause and effect.

The concentration on only two actors, male and female, and the insistence on tactile imagery set up a situation of identification that more randomly organized films do not have. The strength of the identification in the context of the abrupt dislocations and discontinuities provides us with a vivid metaphor of the dream experience.

Modern horror films owe much to Buñuel, and his dark humor continues to be reflected by countless other directors. Un Chien Andalou demonstrates that surreal dreams are prime cinematic subject matter, and they don't have to "make sense" to work well. The film has lived up to its aim to shock. Even when viewed in modern times it's still shocking and the most infamous short ever made.

An Andalusian Dog - Imdb
at May 19, 2012
Email ThisBlogThis!Share to TwitterShare to FacebookShare to Pinterest
Labels: Horror, Magical Realism, Short Films