In Bruges - A Magnificent Black Comedy 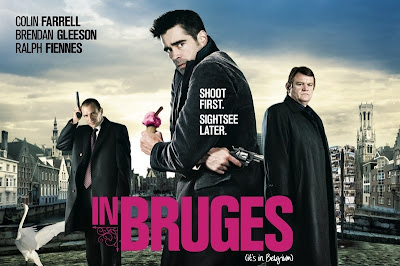 In Bruges is a interesting little film. It looks like a action-film as well as a Shakespearean tragedy. The film lives with Martin's McDonagh's dialogues, and Colin Farell's assured performance. Loneliness and atonement are familiar themes for a hit-man flick, but this movie opts for a high-caliber drama rather than whiz-bang actions.

The content may initially seem daunting, but the film presents it in an accessible, entertaining manner that dares you not to enjoy yourself.

Ray (Colin Farrell) and Ken (Brendan Gleeson) are two Irish hit men who have been dispatched by their London boss, Harry (Ralph Fiennes), to take a few weeks’ holiday in Bruges just before Christmas. We learn later that Ray has shot a priest in his confessional booth on a contract from Harry, but has accidentally also slain an altar boy, which was not in Harry’s contract. 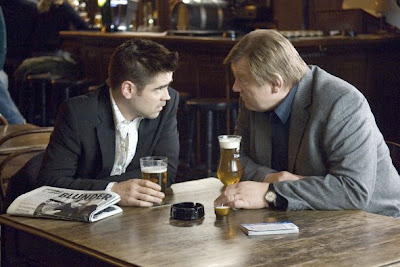 Ray loathes the medieval town. The only thing that sparks his interest, in fact, is a weird art film being shot in the city. Wandering by the set, Ray meets Chloe (Clemence Poesy), who provides illicit craft services for the cast and crew. Suddenly, Bruges doesn't look quite so bad. While awaiting instructions from their furious boss Harry, Ken braces himself for the worst. The story then gets weirder and weirder but is never short on intrigue or laugh out loud moments.
Analysis
Not since “Pulp Fiction” has there been a hitman duo as dynamic as Ray and Ken. They don’t just bicker about the little things – they also get into deep conversations about life, death and everything in between.The movie depends on the relationship between its two stars, Farell and Gleeson. They both manages to keep the laughs rolling throughout the entire film. 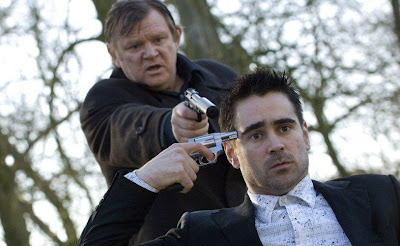 It's no surprise that Gleeson proves so adept in this delicate balance of comedy, but his talents are no less appreciated here. Farrell, however, is something of a revelation. Farrell gives a winning performance as Ray, a confused kid struggling with guilt that threatens to consume him. We're probably not supposed to like Ken and Ray much, because they kill people. But in In Bruges, we can at least own up to enjoying listening to them talk. Ralph Feinnes steals the show as Harry, the boss. He makes Harry approachable and intimidating, shows a bundle of rage in a reasonable demeanor. 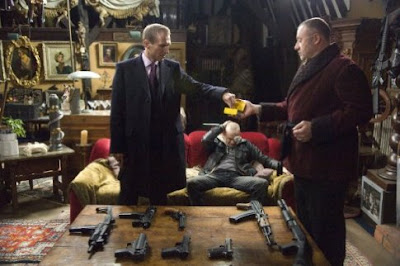 Playwright-turned-filmmaker McDonagh is a writer whose work reveals a talent for intricate plotting, a delight in being playful with the language and a brutal willingness to show violence at its ugliest. Like a good stage play, McDonagh’s film explores character through dialogue as well as action.
In Bruges is not entertainment for the faint-hearted. Like its characters, it’s unruly, foul-mouthed and has a weird sense of humour and no concept of good behaviour. When violence reigns, the film feels overstated, especially at the very end. In Bruges is a morality lesson taught by immoral men. It is a killer comedy.
Trailer
In Bruges - Imdb
at May 09, 2012
Email ThisBlogThis!Share to TwitterShare to FacebookShare to Pinterest
Labels: American Indie Films, Black Comedy

Seems interesting and worth watching,
I think I have just found out how to spend my afternoon today. ;)

@Vinay, Thanks for the comment. It's a interesting movie indeed, do watch it and give your view.

This is the heights of black comedy. When I first saw this movie, I didn't know whether I should laugh at all the comic leverages the characters produced or just silently see the movie in shock!!
Nice post Arun :)