The Spaghetti Westerns of Sergio Leone 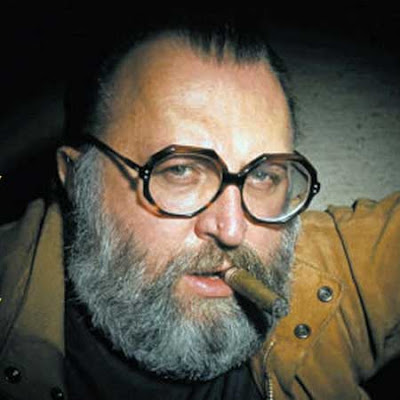 What is a Spaghetti Western?

The most interesting and unique films have come out of Italy and served both as great entertainment, but also as a historical marker. One film movement in particular that flourished in the 60's and 70's was the Spaghetti Western. Fantastic sets, flawed characters and dramatic gunfights were all signature of this popular genre featuring the wild untamed west.

Directors like Sergio Leone took this opportunity to create films in the Spaghetti Western genre. Unlike the American westerns that focused around cowboys and Native Americans, these westerns were usually set in a time period after the American Civil War and depicted the recovery of both the North and the South of with the main characters in between the conflict.

Among the several Spaghetti Westerns that spanned across the sixties, the 'Dollars Trilogy' was the most famous one, all directed by Sergio Leone.


Sergio Leone's Gift To Cinema
Sergio Leone set the pace and tone to this genre, and he also gave a style. He was the creator of a silent stranger in the westerns. And he also gave us the legendary Clint Eastwood. The western for Sergio Leone is a genre in which he can explore his own, sad, grotesque, and surreal visions of life. Leone was no more interested in what could happen or did happen in the West than he is in any conception of surface reality in his films. 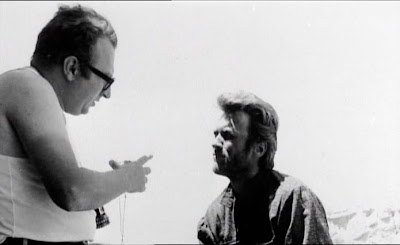 The Dollars Trilogy, Once Upon a Time In The West are all a comic nightmare than the traditional westerns of John Ford or Howard Hawks. Sergio Leone's film career wasn't very important before the Dollars Trilogy(Fistful of Dollars, For a Few Dollars More, and The Good, The Bad, and The Ugly). After a brief stint in law school, the young Sergio promptly joined the family business in 1948, working as an assistant to the legendary Italian director Vittorio de Sica on his neo-realist classic "Bicycle Thieves" (1948).

Leone's big break came in 1959 on the set of "The Last Days of Pompeii" when the film's director became ill on the first day of shooting and Leone took over and began developing a style that became so recognizable in his western films.

Dollars Trilogy
Leone adapted Akira Kurosawa's 1961 samurai film "Yojimbo" into "A Fistful of Dollars" (1964), moving the story from medieval Japan to the American Southwest and replacing Kurosawa's wandering samurai with a nameless, gun-slinging drifter. As a mysterious outlaw who came to be known as the Man With No Name, Eastwood embodied the director's combination of extreme violence and ambiguous morality.

After the success of A Fistful of Dollars, the Italian studios wanted more. So Leone went about starting a sequel, with a apt title, For a Few Dollars More. And with this film, Leone expanded on his style. The pace is slower and his trademark waiting and lulls before death are far more obvious and evermore present.

Three gunmen battle it out in Civil War torn New Mexico for a coffin full of gold.This is the plot of one of the great westerns ever made, The Good, The Bad, and The Ugly. In his third and final film with Eastwood, he destroyed the most simplistic image of a western cinema. In this film, Eastwood character is both amused by and aloof from the grotesque world. Leone's hero is only a mystic survivor, among the massive destruction, which is exemplified by the civil war.

The "Bad" in the film is also not defined by the traditional morality of the world. Between the two non-extremes stands, Tuco, "The Ugly"-- physically coarse, a bit dirty, but vibrant and alive in contrast to the other two cold characters. Good and Ugly are all moral extremes, but "The Ugly" represents the human who acts out of animal immediacy without recourse to postures or guilt.

In the film, Leone's use of the extreme close-up is a major tool for getting to a character. Plot is of minimal interest. What is important is the examination of these characters. The popular press found the film amusing but meaningless, upon its release is an expected one in the history of works of popular culture which were unrecognized by critics , who thought a violent, comic work could not possibly be worthy of serious attention.

A Grand And Epic Western
Once Upon A Time In The West is Leone's fourth western and marks the beginning of his career in Hollywood. The great Henry Fonda played the ruthless villain and Charles Bronson, played a role similar to Eastwood called 'Harmonica.' Fonda was best known for playing wholesome leading men, before this movie. Yet as Frank, we see him shoot a child in cold blood because the boy has learned his name. Despite the impressive cast, the movie was not a success in United States. 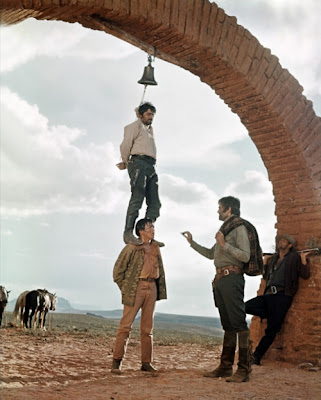 It was one of the most difficult, elaborate movie of Leone. The fact that the opening credits take over nine minutes will gave an idea of its slow pace. But, the film is generally praised for the performances of its leading actors, and Leone's masterful control over pace, action, and narrative tension. The basic plot is a standard western fare. It is about a woman who's family is massacred by railroad men. She soon meets and is befriended by two men, a mysterious stranger and an eccentric outlaw. Both protect her but one has a score to settle with Frank, the head railroad man.

Unlike a typical western film hero, Harmonica is driven by a desire to torture and kill his brother's murderer, than to save the women. While classic western heroes, protect a society based on honesty and hard work, Once Upon A Time In The West reveals that such societies have their beginnings in jealousy, revenge, and murder. The movie replaces the established western mythology of honest struggle, endeavor, and sacrifice, with a dishonest, perhaps more realistic, vision of how the west was won. 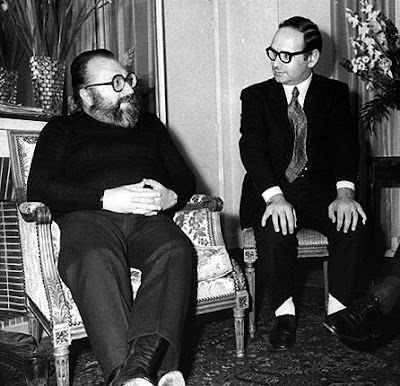 The way they worked with the score is unique and intersting. Morricone liked to write some part of the score before the film is shot, and Leone would cut his film to the score after-wards.A great example is the final duel in "The Good, The Bad, and The Ugly." Here, it was obvious that Leone arranged some kind of choreography rehearsal and cut from one character to another to meet the pace of the score.

There is a biography on Sergio Leone. I am trying to get a hold of it. Unfortunately, it is not available on Kindle. Sergio is one of my favorites. There is a lot to learn from his movies - be it direction or photograhy

Thanks for this lovely piece of nostalgia. THE GOOD THE BAD AND THE UGLY is arguably the best Western Movie ever made - and my all time favourite