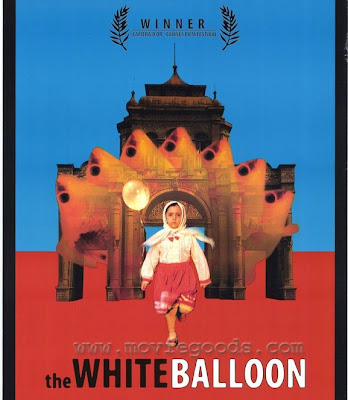 We live in a era, where politics and other factors brings out the ethnic hatred among people, and makes us fight against one another. So, it is often great to come across a film like "The White Balloon," which reminds us of the universal human qualities linking people from different cultures together.

Iranian films are not big in terms of budget. But, the simple yet appealing movies from Iran, are greater than the big-budget crowd-pleaser. The White Balloon, written by Abbas Kiarostami and directed by one of his proteges, Jafar Panahi, has the characteristic slow, noble tone, and in terms of its minimalist narrative, it's reminiscent of Vittorio De Sica's Italian classic, The Bicycle Thief. The movie is told from the vantage point of a 7-year-old girl Razieh (Aida), in real time.


Plot
It is an hour and a half before a new year begins in Teheran (on March 21), and the city is poised for celebration. A stern and adorable 7-year-old girl named Razieh (Aida Mohammadkhani) is pouting about not having the right goldfish for this occasion. The fish at home are skinny. She wants a fat one with better fins. So she cajoles her mother into giving her money for this purchase, but then the money is accidentally lost. 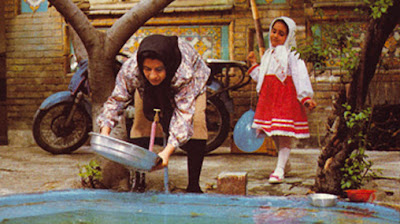 Razieh enlists the help of several strangers to try retrieving it from beneath an iron grate. For the rest of the film, we experience her misadventures and see the world through her eyes as a place that's large and strange and uncertain.

Analysis
The brilliance of the film, is in its simplicity. The story that unfolds is about the little girl's adventure with the shop owners and the strangers in the street she is not supposed to talk to but does. We get caught up in it, because it is so universally understood. 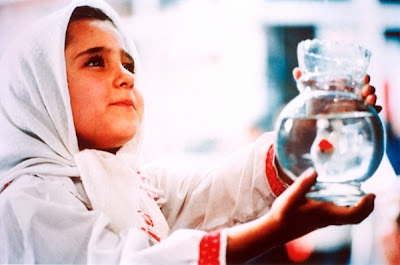 Without overburdening his slender story, Mr. Panahi strings together a set of brief encounters that are revealing and intense. He displays an uncanny ability to dramatize this child's view of a kaleidoscopic society without making a fetish of her perspective. For the film to work, Panahi needs to build suspense and make us feel that Razieh's predicament -- her desire to recover the money and bring home the prized goldfish and change for her mother -- really matters. That absolutely works here, mostly because Mohammadkhani as Razieh is so magical and so persuasive. Her natural warmth and stubborn determination make her identifiable to anyone who has ever been a child. 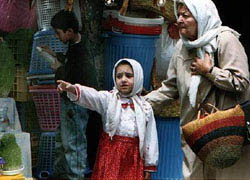 The screenplay by Abbas Kiarostami, has delightful and colorful characters with wry observations on the interaction of children and adults. Apart from its simplicity, the movie gives us a rare glimpse into the real Iran. Here, freed of political shading, we meet the genuine inhabitants of Tehran, and, unsurprisingly, find that they're not all that different from us.
"I'll tell your mother it wasn't your fault," says a older woman reassuringly, about the lost money. No says, Razieh. She knows very well whose fault it was. And even at 7, she shares this frankness of Iran movies and its gift for telling the truth. If you can sit through this 85 minute film with patience, you might uncover a sublime, unconventionally engrossing story.
Trailer
The White Balloon - Imdb
at May 13, 2012
Email ThisBlogThis!Share to TwitterShare to FacebookShare to Pinterest
Labels: Family Drama, Feel Good Movies, Iranian Cinema, Social Drama

Lovely review. Also the movies, 'The Apple' , 'The Mirror' and 'Song Of Sparrows' are brilliant and very Italian Neorealist as well.