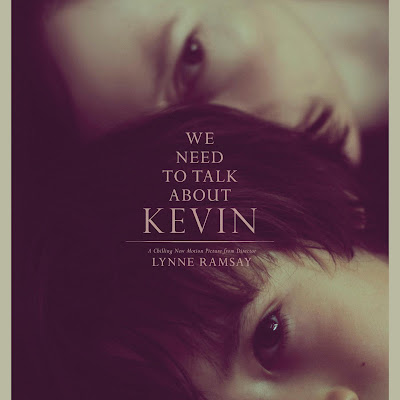 Every parent's mind wanders at some point when a child is misbehaving: Is there something wrong here, something more than just the usual acting out that all kids go through from time to time? what happens when everything ugly about the world is embodied in the son, when he's the source of the "sin and woe"? If the bond between mother and son becomes tenuous or broken, is that the result of his evil deeds, or the cause of them?

In director Lynne Ramsay's devastating film "We Need to Talk About Kevin," a mother's nightmare comes true. This is one of the most unsettling films with its chilling portrait of a wayward and psychopathic son and his perplexed and emotionally vulnerable mother. Many people after watching "We Need to Talk About Kevin" will be too stunned to talk about Kevin, or much else either.

Working from Lionel Shriver's novel, Ramsay and her equally unflinching star, the mesmerizing Tilda Swinton, present a troubling, challenging examination of what Ramsay, speaking at Cannes, said, "one of the last taboo subjects: You're meant to instantly love your baby from the moment he's born, but what if you don't? And what if that baby grows into someone terrifying?"

Plot
It's a tale of a child who from birth is spiteful, mean, cruel and potentially murderous. The boy is born to a normal enough Mom, Eva (Swinton), a travel writer who finds herself from infancy tied to the manipulations of her son. The father(John C.Reilly) is clueless about his son's treachery and ignores any attempt at enlightenment by his wife. 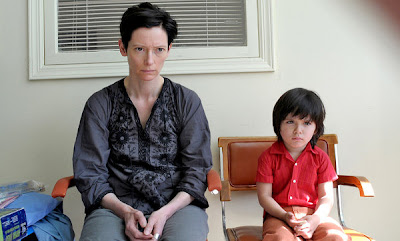 Kevin marches around the home defiantly in diapers until he's six. When a younger sister is born he — literally — tortures her. Pets go missing. Kevin never accepts blame for anything, and directly taunts his mother with his own madness. 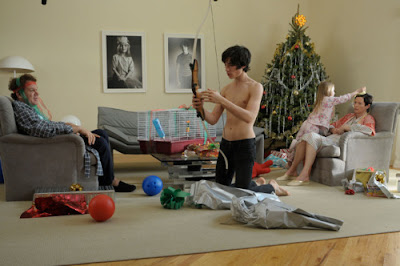 In flashbacks and forwards we see Eva rebuilding her life, hated by neighbors, after Kevin (Ezra Miller, grown) has gone on a school shooting rampage — it happens early, though not graphically. We see her struggle to reason with this devil of a child.


Analysis
Ramsay, who also co-wrote the screenplay, works with the gifted cinematographer Seamus McGarvey("The Hours, "Atonement") to give the film a signature look, with vivid colors, especially red -- the color of paint, the color of ambulance lights, the color of blood. The main thing to praise about her direction is the way she keeps most of the real violence off-screen while still conjuring up its mood with images of smashed eggs or red splashes. Because of Ramsay's visuals, the film functions on an expressionistic as well as a literal level. 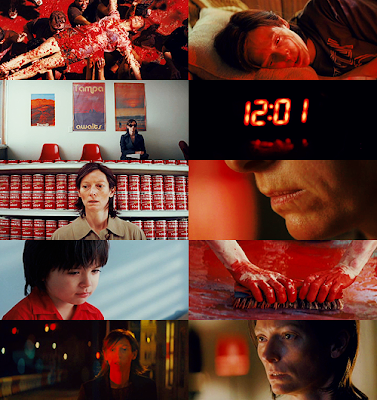 As Eva, Tilda Swinton gives a painfully raw performance; she inhabits Eva's desperation and helplessness without succumbing to over-dramatization, and so much of the character is conveyed in what she does not say. Swinton admirably conveys the shaky resolve of a woman who is constantly clinging to the fading hope. The part of Kevin is brilliantly cast three times over. Rock Duer plays the boy as a toddler, Jasper Newell is the preadolescent and Ezra Miller is the calculating, malevolent teen. The actors are a perfect match physically, and they project the character's soulless, half-amused hatred chillingly. Especially, Miller gives a near-flawless performance, embodying every traits of a self-satisfied teenage. 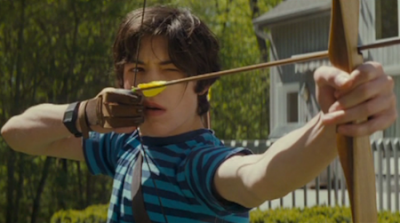 When teenagers take out their violence on others, the question "Why?" hangs like a knife over the entire community. Are they trying to be seen? Are they getting revenge? The old image of the world consisting of good people and bad people is no longer a viable way of looking at these things. It is easier to blame the parents than to have compassion for them and their suffering.

How does something like this happen? That would be the question one everyone watching this movie would ask, but it doesn't answer. Instead, it just happens, the movie suggests, with seemingly no rhyme or reason. Kevin is not abused; if anything, he's spoilt. He is just a bad guy, plain and simple. That may not be satisfying in the end for some. But  the performances of Swinton, Miller makes up for that.

We Need To Talk About Kevin is, in a way, a real horror film about everyday things and a disconnected family. It's a film to think about and debate, but it's hard to embrace.

We Need To Talk About Kevin - Imdb
Rated R for disturbing violence and behavior, some sexuality and language

Wow! I have never seen this movie but a vivid gist of this mature horror story! Good Work!

Have not seen this movie...It seems to be dealing with such a sensitive subject...Love your reviews and posts! Kudos!

Thanks for the review.

@jaish_vats, Thanks for the comment. Do watch the movie, and give ur opinion. Keep visiting the blog.

@Ravi, Thank you for reading the review.

A must watch . Thank you arun.

Thanks for suggesting:). Never heard of this one:).

Thanks for your review! I haven't had a chance to see We Need to Talk to Kevin but I heard good things about it. I have read a lot of good reviews as well. I recently ordered it on Blockbuster @Home so I should be getting it in the mail soon. This movie has been recommended by all my Dish co-workers so I can't wait.