Kim Ki-duk's "3-Iron" ends with a reminder, printed on the screen , the gist of which is that we can't always distinguish reality from dreams. After finished watching this movie, i thought a long time on how to write a meaningful review, without spoiling away things for a viewer. But then the spoilers are not plot-centered, so i thought these revelations are  not going to disturb a viewer's experience.

A haunting film is one that relentlessly stays with the viewer for hours, or even days, after a viewing. Its memory refuses to diminish and it demands reflection. This enigmatic and in some ways maddening motion picture has the power to haunt every viewer it reaches.


Plot
Tae-suk (played by Jae Hee) is a gentle drifter who places advertising fliers on the doors of houses and apartments. When he returns and finds a flier still on the door knob, he knows he's found an empty house. It's not a fool-proof system -- sometimes people return early, or, in the case of Sun-hwa (Lee Seung-yeon), the abused wife of a wealthy brute, they sometimes hide in their own houses. 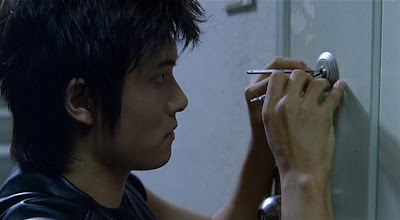 Though he's broken into her home, Sun-hwa observes the young man and is touched by his fastidiousness and care. After her husband returns, and continues to abuse her, she escapes with Tae-suk into his wandering life, and into the homes of strangers. One day,  Tae-suk is arrested on suspicion of murder when he and Sun-hwa break into the home of an old man -- an old man who just happens to be already lying dead on the kitchen floor.

Some strange and violent and inexplicably beautiful things then happen to Tae-suk while he's languishing in jail. Sun-hwa, meanwhile, having been returned to her husband, awaits the release of her lover.


Analysis
"3-Iron" is a rare love story between two ethereally beautiful young people, neither of whom says a word to the other, throughout the movie. Although almost nobody talks in "3-Iron," the film is far from silent. You become aware of ambient noises that might go unheard over the clamor of constant conversation. Tae-suk never talks and Sun-hwa only has a few lines near the end. 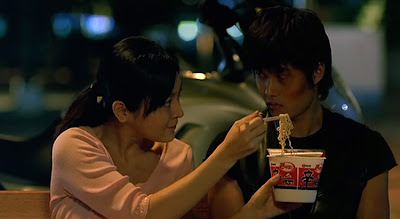 By eliminating dialogue, Kim forces his characters to interact on a non-verbal level, and it intensifies the manifestations of their emotions. Every nuance of body language and each facial expression gains added meaning. These two communicate perfectly, but have no need of words to do so. The dreamy atmosphere of romance and longing is beautifully created. Kim works with the simplest of materials but returns the viewer's attention to the pure visual pleasure of film-making. The sooner you let yourself go with Kim's flow, the more likely you are to come away satisfied.
3-Iron is divided into three clear acts. In the first, Tae-suk is by himself. The second part develops the romance between Tae-suk and Sun-hwa. Then there's the third act, and that's where most of the discussion will be centered. Much of the film's quietly hallucinatory third act, confuses a viewer, whether it should be taken literally or allegorically. 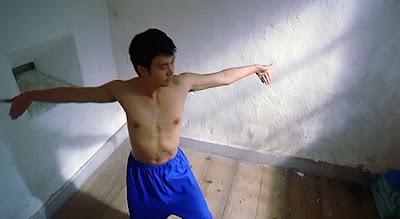 But, it's clear from the haunting yet resonant poetry of "3-Iron's" largely wordless narrative that sometimes two people don't even need to be physically together to live happily ever after. "3-Iron" is a teasing, self-conscious and curiously heartfelt movie. If you stay with Kim Ki-duk's 3-Iron, then the film will definitely stay with you.
Trailer
3-Iron - Imdb
at May 06, 2012
Email ThisBlogThis!Share to TwitterShare to FacebookShare to Pinterest
Labels: Allegorical Movies, Korean Cinema, Romantic Cinema, Surrealism

You really didn't spoil the interest in the movie instead you have flared it up.

@Neeraj Kumar, Thanks for your comment, and do watch the movie, and give ur opinion.

My... Now I can't wait to watch this film. It seems to have really put its message across...

@Aline, Thanks for the comment. Do, watch the movie and give your opinion.