12:08, East of Bucharest -- A Terrific Dry Comedy on the Failed Ambitions of Eastern Europe 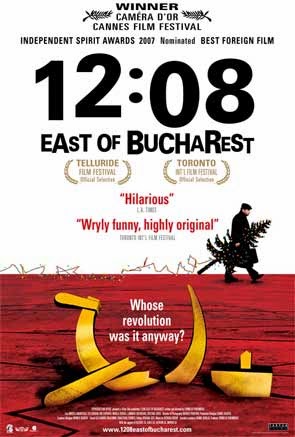 Dry comedy movies from Eastern Europe seem compatible with the damp, drab surroundings. The institutional mediocrity of the small towns in Eastern Europe brings out the best out of their cinema. Young Romanian film-maker Corneliu Porumboiu’s “12:08, East of Bucharest” (2006) takes place in such an atmosphere, where realism and politics echoes even in the smallest of events. The title refers to the alleged time on 22 Dec.1989, when Romania’s communist regime shattered. It is referenced as the time when the Romanian dictator Nicolae Ceaucescu flew from his presidential palace, as shown on live TV. Director Corneliu got the idea for making this film, when he saw a local TV station hosting a program that looked back at the events of 22 Dec. 1989. He shot this movie on a very modest budget, which went on to win ‘Camera d’Or’ at Cannes in 2006.

“12:08 East of Bucharest” opens with the image of a glistening Christmas tree amidst the concrete jungle in an empty Stalinist town square. It is early morning on 22 Dec. 2005, and the street lights throughout the city are gradually turned off. Then, we are introduced to three morally exhausted men. Manescu (Ion Sapdaru), an alcoholic history teacher, who has spent the previous night on a bar. He owes money to everybody. His only friend is a Chinese shop owner, whom he demeans with racial slurs when he is inebriated. On 22 Dec. he is about to attend a local TV show about the 16th anniversary of the revolution. Virgil Jderescu (Teodor Corban) is the arrogant host of local TV show. He wants to establish that the revolution somehow sparked in his town. His topic for that day’s show is: “Was there or was there not a revolution in our town?” 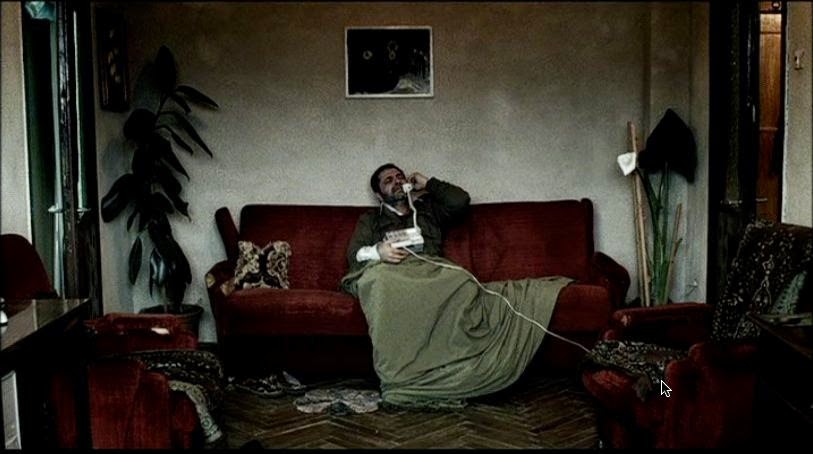 After few troubles he scrapes up two guests for the show: history teacher and an elderly grump, Emanoli Piscoli (Mircea Andreescu). Piscoli is a pensioner, widower, and likes to wear the Santa Claus attire in the Christmas season. The old man also battles with the school kids in neighborhood, who often lights firecrackers outside his door. In the film’s second half, the hilarious live TV discussion starts with the two oddball guests and the pompous TV host’s burning question leads to on-camera squabbles. 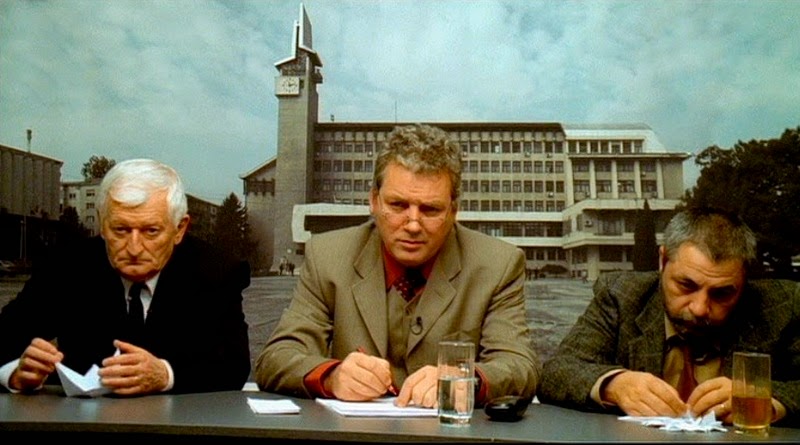 First-time director Corneliu first subtly sets up the personalities of the three primary characters through small conversations and expressions. Like in many Eastern European films, the personal flaws of the characters reflect the larger failings of the system. The dry humor comes from the reactions of these characters, when phone callers in TV show frantically swear that the revolution never came to their town. On one hand, Manescu tells his patriotism; on how he and his deceased friends sparked the revolution in the town square, while on the other hand, the phone callers constantly debunk Manescu’s telltales. Meanwhile, Piscoci obliviously tries to build a paper boat. The deadpan tone reaches its peak in these scenes.

Director Corneliu’s minimalist comedy establishes that in many ways the town hasn’t changed than it was under the communist regime. It tells that the 12:08 on 22 Dec is just a time stamp that no more holds relevance for young Romanians, as August 15th, 1947 does for young Indians. The new regimes might proclaim, theoretically, that it’s a dividing mark between tyranny and freedom, but from a practical perspective, nothing much changes. The director also tries to indict the entire Romanian community for reeling in passivity. 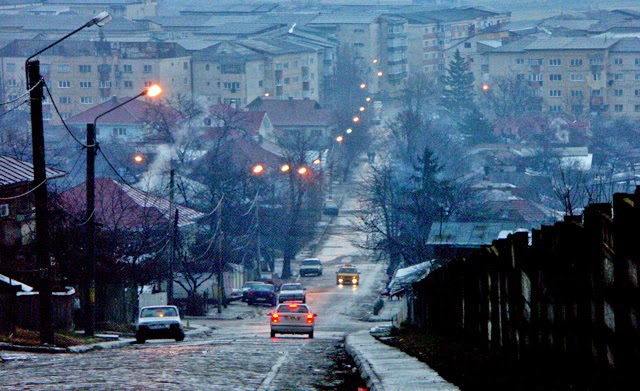 Corneliu silently poses a most important question within the TV show’s question: "Was there a revolution or not in our town?" He tries to ask: ‘what the so-called revolution really accomplished?’ The director also hints at the circular structure in history or in our personal foibles. The movie starts with lights turning off at the dawn of 22nd Dec and the end with the street lights getting turned on. In an early scene, history teacher Manescu angrily remarks to his failed students: “You can’t even cheat properly”. During the live TV show, Maescu becomes the guy who can’t cheat his audiences well. Eventually the film suggests that history is itself a joke because its inherent circular structure makes people to face the same problems that disrupt progress.