The Pledge -- A Haunting, Oblique Thriller 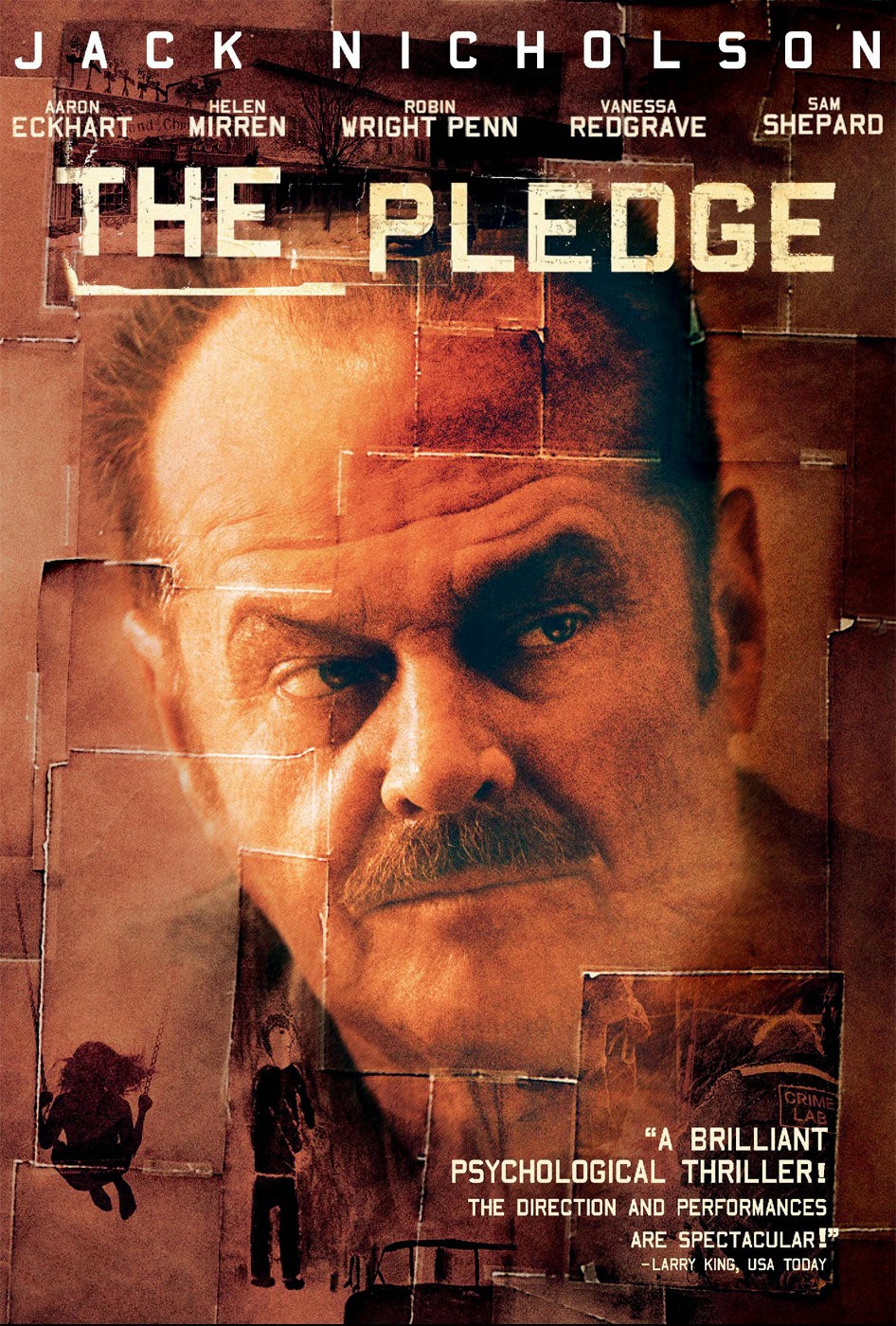 Sean Penn’s “The Pledge” (2001) opens in a dry scorched landscape, where a man talks to himself, as if he is gripped by madness. The birds’ cacophonous sounds and the man’s ravings hint us that this film is going to have bleak mood and a morally ambiguous plot structure. “The Pledge” was based on 1958 novel by Swiss mystery writer Friedrich Durrenmatt. The novel was adapted in the same year (known as “It Happened in Broad Day Light”) by Hungarian director Ladislao Vajda. Sean Penn and his script writers Jerzy Kromolowski and Mary Olson-Kromolowski has set the story in wintry Nevada, US. The film’s primary character was done by Jack Nicholson (one of his most underrated performances).

The movie opens with a retirement party for Jerry Black (Jack Nicholson). He is a first-class detective and respected by his colleagues. During the party, news comes about the discovery of a dreadful murder:  A 8 year old girl’s body has been found in the snow-bound mountainside. The little girl, Ginny has been sexually assaulted and murdered in a brutal manner. Jerry wants to accompany the detectives, even though he is about to be retired in six hours. Jerry visits the child’s parents to tell them about sad news. He is confronted by child’s mother (Patricia Clarkson), who asks Jerry to swear on a cross -- made by their murdered little girl – that he would find the killer. 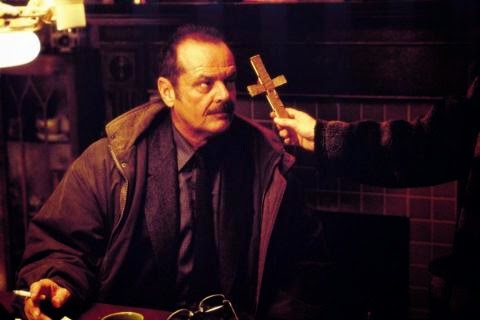 Soon, the police have a man in custody, who was seen in the crime scene. The accused man, a mentally-challenged Indian (Benecio Del Toro) has previously committed sexual assaults. The young lead detective (Aaron Eckhart) gets in the investigative room and soon coerces out a confession from the guy. While celebrating for solving Ginny’s murder, the accused Indian commits suicide by taking over a cop’s gun. Ginny’s case is closed. However, Jerry isn’t convinced. He thinks a serial killer is at work. He cancels his fishing trip and goes on to question the town folks where Ginny lived.

A picture drawn by Ginny totally convinces Jerry that the killer is definitely not an Indian. He also pieces together information about two other little girls in nearby towns (one disappeared and other murdered brutally like Ginny). All the three little girls are in the same age group, has blonde hair and wore red dress when they faced this hideous monster. However, Jerry’s former boss (Sam Shepard) is reluctant to re-open the case. So, Jerry moves to right in the middle of the triangulation of locations where the three girls were murdered. He buys a service station to stay busy. He later befriends a local waitress (Robin Wright) and her little blonde-haired daughter Chrissy (Pauline Roberts). 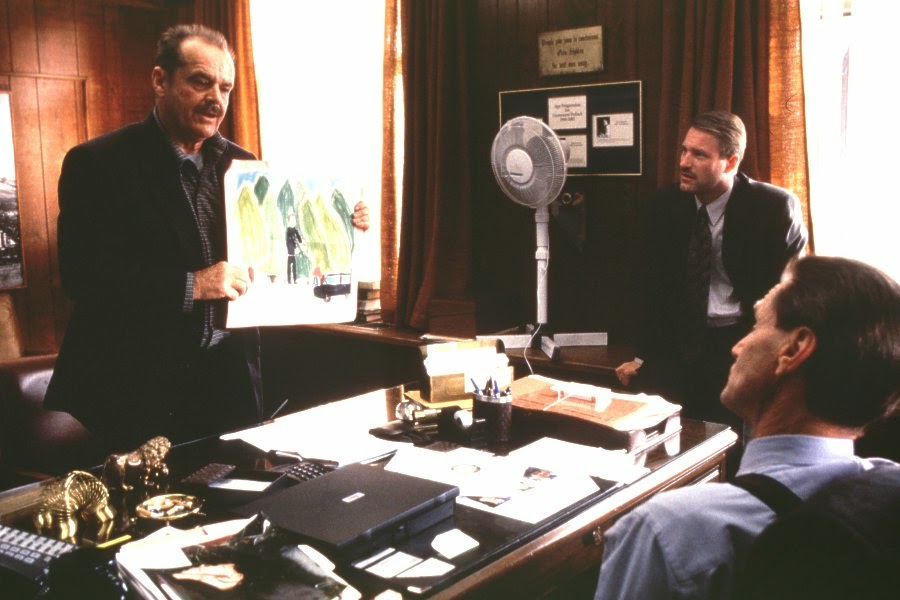 “The Pledge” although starts like a generic detective thriller, it isn’t. It is a character study and a psychological thriller. The film starts with a familiar storyline – a veteran detective dealing with a brutal murder, but from then on the film unravels as a character-driven thriller rather than a ‘whodunit’ mystery. The script is a low-key study in obsession, dread and paranoia. The characterizations are etched out with greater restraint and subtlety. The dark subtexts to Jerry’s actions are unraveled in a subtle manner. He keeps the blond-haired Chrissy as bait, even though he seems to care for the girl. Jerry plays father-figure, but when the girl wants to buy a red dress, he encourages her to do so. Jerry’s relationship with Chrissy and her mother is constructed slowly and perfectly. The film’s moral ambiguity starts from here as the viewers will constantly ask themselves: does he love Chrissy like a daughter or is he just risking her life to silently lure the killer? 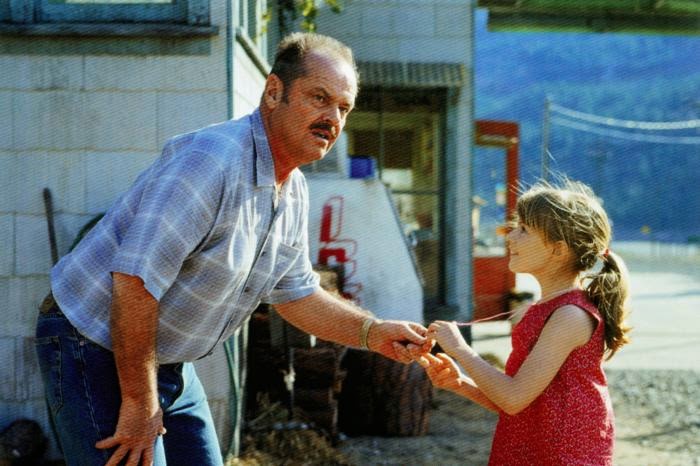 The ending is bold and distressing as it doesn’t give us any easy answers and a neat wrap-up. The climax might frustrate a lot of viewers but it is lot better than cheap finishes in murder mysteries and it makes us understand to the fullest extent about Jerry’s inherent character flaw. Cinematographer Chris Menges’ subdued, grayish wintry look and the scorched rural-based looks are all visually poetic. Penn’s movies (from “Indian Runner” to “Into the Wild”) always like to play out the themes of vengeance and obsession. In ‘Pledge’ he never allows the narrative to meander and gives us little details and actions that may not look much on their own, but adds up in a significant way towards the end. With a trademark devilish squint and deep-set of eyes, Jack Nicholson as Jerry gives us a subtle performance that is deeply felt. Nicholson gradually brings out the aspects of a lawman that is utterly driven by instincts. Great numbers of prominent Hollywood actors appear for few minutes of screen time, including Vanessa Redgrave, Harry Dean Stanton, Mickey Rourke, Helen Mirren, Benecio Del Toro, and Lois Smith.
“The Pledge” (124 minutes) is a haunting thriller that is more ambiguous and enigmatic than the usual Hollywood police procedural. The film boasts an excellent performance from Nicholson and a tragic mood which refuses to wash way quickly.

A brilliant indie from Sean Penn... if This Must Be the Place was the movie which really made me respect Penn as an actor then The Pledge has to be the film which convinced me of his directorial prowess. Nicholson's performance is the movie's backbone of course but Penn's inspired direction is nothing short of a revelation. The ending is just sublime (with that strange sort of a twist to the tale). Great Review!

@ Murtaza Ali, thanks for the comment. Yeah, Sean Penn is very under-rated as a director. Even his less acclaimed "The Crossing Guard" is far better than other Hollywood crime/drama. Penn's direction and Nicholson performance has made me eager to watch the early 1958 adaptation of the same novel ("It Happened in Broad Day Light"