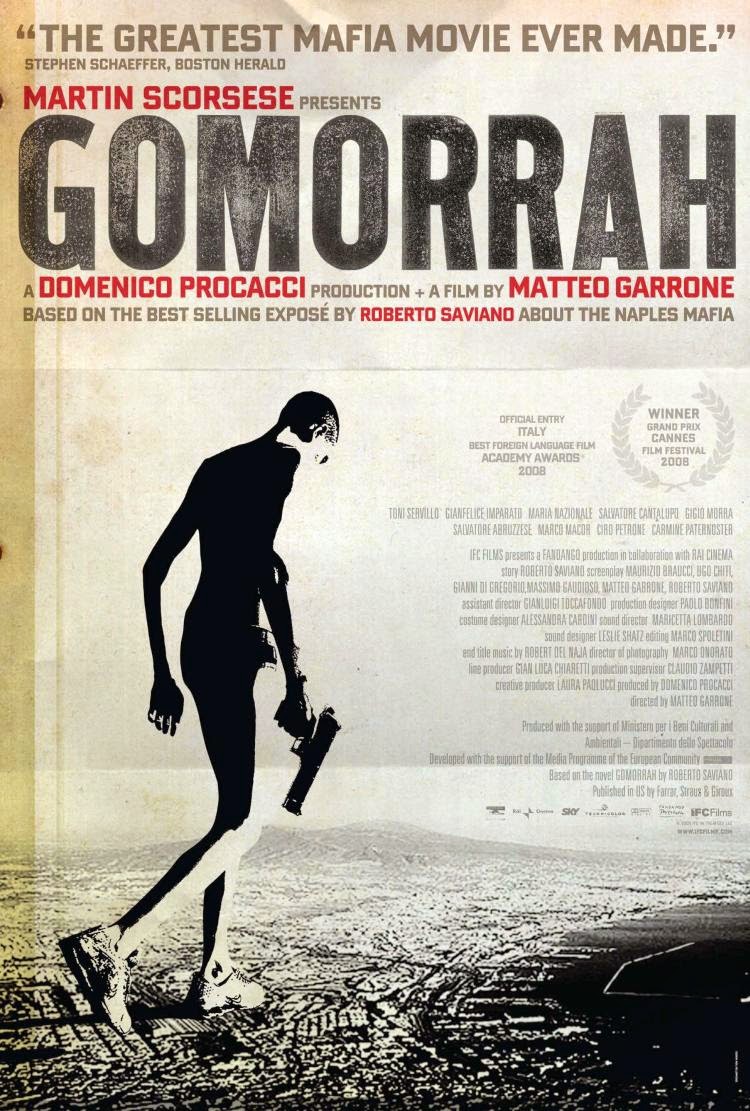 Movie medium have always exhibited a fascination towards organized crime. The gangster genre achieved prominence in Hollywood in the early thirties with movies like “Public Enemy” (1931), “Scarface” (1932) etc. The genre reached an exalted state with Coppola’s “The Godfather”. Although Coppola, Scorsese (“Mean Streets”, “Goodfellas”, “Casino”) and many other top directors chucked out the romanticized visions to give us more pointed criticisms, the characters (in those films) were made so colorful and the violent scenes were excellently choreographed that it sometimes made us to overlook the sharp observations. There is no doubt that “Godfather”, “Scarface”, and “City of God” are all classic works of cinema, but we are little enchanted by the activities of anti-heroes ‘Michael Corleone’ and ‘Tony Montana’. Matteo Garrone’s Italian crime drama “Gomorrah” (2008) doesn’t have any of those glamorized visions of mob. The title of the film refers to both the ancient biblical city of sin and ‘Camorra’ gang of Naples, Italy – the ruthless crime syndicate which hasn’t gained much attention in cinema.

“Gomorrah” was based on controversial book by journalist Roberto Saviano. After its publication in 2006, Saviano got death threats for ‘Camorra’ crime family for detailed exposition of their activities, and later he was permanently placed under police protection. The Sicilian branch of Italian mafia got extended to America and gained prominence in Puzo’s novels, whereas the Camorra clan mostly works in and around Naples. It consists of 100 or so organized gangs that are constantly at each others throats. The plot loosely intertwines five story-lines, where the individuals’ lives are touched by the Camorra gang. The film opens in the blue glow of tanning salon, where four men are brutally shot. Who and Why? We don’t know but we could feel that it’s just another mob death that has been going on for generations. 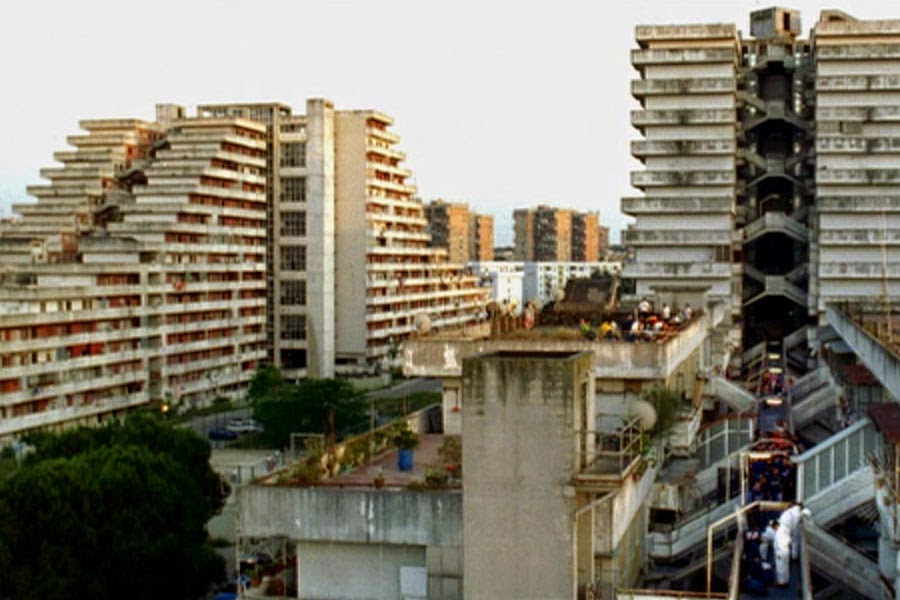 The film takes place in the Scampi quarter in Naples suburb. The suburb -- one of the world’s largest open-air drug markets -- is the best example for disastrous urban planning, where there is neither light nor space for the inhabitants. The narrow alleys when looked from the top might resemble a honey-comb maze, and the crooked residential buildings resemble the ancient Aztec Pyramid. The five story-lines concentrated in the plot are: a 13 year old boy (Salvatore Abruzzese) joins the local gang for excitement and money, but only later realizes the consequences; a soft-hearted money runner for the gang, who grows increasingly wary about his job; a talented tailor who works in Camorra controlled dressmaking factory, secretly teaches his competitors (Chinese) too; two trigger-happy young boys, who wants to form their own gang; and a smooth-talking businessman (part of Camorra Gang), who with the help of a junior executive dumps barrels of toxic waste near the residence of under-privileged. 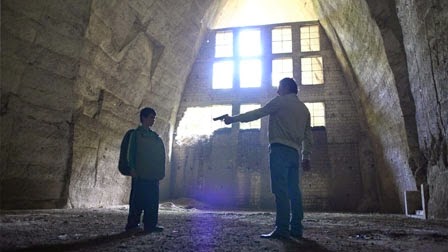 The movie starts on a bit of false note because the hyper-stylized violence in the opening sequence doesn’t fit into the tone of the story. May be the sequence was conjured to lure upon the viewers. The end credits lists various ills done by Camorra gang (including 4,000 murders in the 30 years), but had this been displayed at the start of film, it could have assisted us to understand the incidents and characters. Repeated viewings are a good option and it can help you to comprehend the story-lines. First time around, I was severely disappointed with “Gomorrah” since I expected a “City of God” or “Scarface” like gangster saga. But, subsequent viewings helped me to connect the dots and to understand its grim world-view. It later captivated me, since I liked the lack of flamboyant excesses of a traditional mob movie. 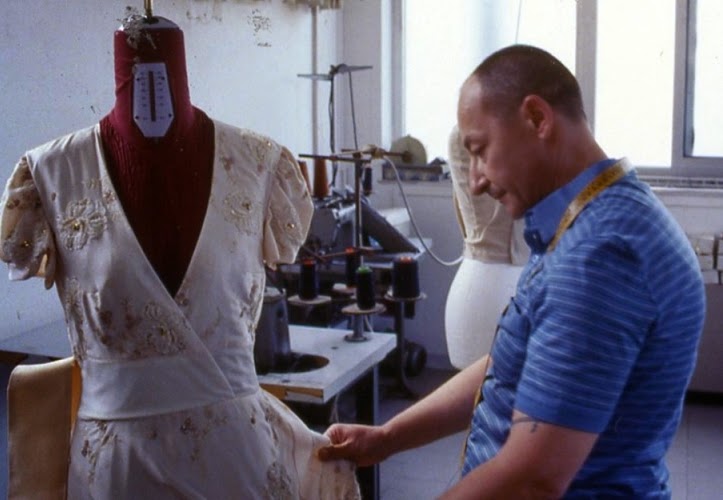 “Gomorrah” can be best experienced if the viewer doesn’t concentrate too much on the plot (like what or why is it happening) and rather follow the characters’ movement. Corruption, murder, money and drugs are at the forefront like any other gangster cinema, but we don’t get the detailed explanations about this crime enterprise. The powerful and rich heads of the gang hide under shadows of mid-level bosses, who don’t live a large life like ‘Tony Montana’. The film reminds me of David Simon’s hard-hitting TV series “The Wire” and Steven Soderbergh’s “Traffic” (2000). Like ‘Wire’ the film shows how teenage drug dealers guarding their corners is interconnected with the cash counting mid-level bosses to high-level, million-dollar waste disposing businessmen.

In “Gomorrah” there are no favorite characters to root for and the documentary-like camera work may put off most viewers. But, that exactly seems to be the idea of director Garrone. He doesn’t wants us give the camaraderie feeling about organized crime. There are also no neat resolutions and easy answers. Writer Saviano says “It's not the movie world that scans the criminal world for the most interesting behavior. The exact opposite is true”. These words are detailed in one story line, where two young guys play at being ‘Tony Montana’ and in the next scene lives their fantasy by robbing African crack-dealers. 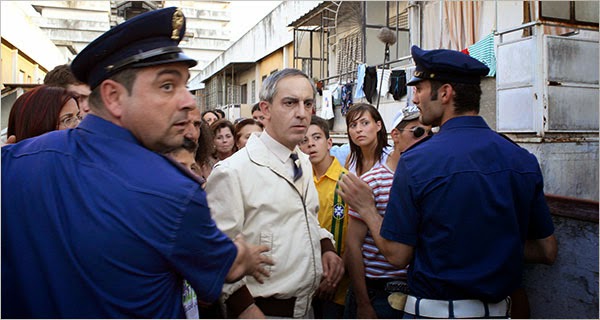 Strip clubs, weirdly structured real estate buildings, sweat shops and toxic wastes dumped quarries – the Italy we see in “Gomorrah” looks like a snake pit. However, the unflinching view of the ugly mob seems universal as every city in this world has its own version of ‘Camorra’. It clearly depicts how lawlessness and corruption itself becomes a powerful ‘system’, which pervades positive growth at every level.