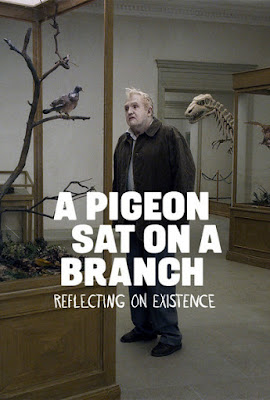 Making sense of Swedish film-maker Roy Andersson’s works through words is perhaps impossible. Fifteen years ago he came up with his fragmented, dry absurdist approach (in “Songs from the Second Floor” (2000)) to showcase the ineffable bizarreness of human existence. After “You, the Living” in 2007, Andersson has finished his ‘living trilogy’ with “A Pigeon Sat on a Branch Reflecting on Existence” (2014), by offering up a similar series of wonderfully executed, hyper-real vignettes. Andersson has stated in an interview that his ‘primary aim is to lift the visual qualities in film-making so that we can reach the same level as paintings’. So, gazing at an instantly recognizable Andersson shot is somehow similar to watching a great painting, where the static figures are contemplating on existential malaise.

Each of Andersson’s static shots is impeccably built from scratch with both background and foreground in sharp focus. The opening shot of ‘Pigeon’ shows an overweight man, in a museum, closely studying stuffed birds inside glass cases. The shot probably establishes Andersson’s body of work, where he gazes upon his human subjects with a revelatory and anthropological curiosity. Each of the director’s pale-faced characters gradually oscillates between tragedy and comedy as they contemplate on their desiccated modern existence. The beige and grey palette, loosely connected nightmarish scenarios, and blithesome music serves to heighten his serene, fixed shots’ ironic effect. Roy Andersson’s style could easily bore and frustrate an audience who expects a perceivable narrative in a film. They might find it as an incoherent & pretentious piece, masquerading as art form. Well everyone has their own opinion on ‘what makes something art’, but I feel there is a lot to take in Andersson’s frames & characters (myriad of interpretations) – in both metaphorical and concrete sense. 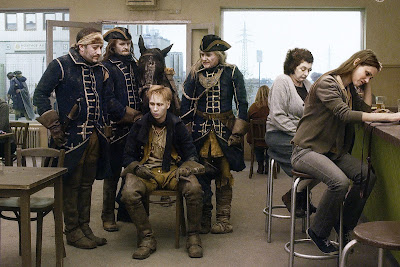 In “A Pigeon…” weirdness unfolds in the foreground: A young tyrannical Swedish king (1692-1718) with his military officers storms inside a local pub and posts bizarre demands on the stunned public; a old deaf man in a basement pub flash backs to 1943, where young men sing in harmony and pay for their drinks by kissing the barmaid; A lonely lieutenant finds everything in his life cancelled or postponed; in a chapter tagged ‘Homo sapiens’, we watch a ensnared primate receiving periodic electric shocks as a woman casually speaks on her mobile; A platoon of white soldiers push African slaves into a giant rotating boiler device for creating a pastime for wealthy aristocrats. But, apart from these marvelously constructed episodes, there really is some sort of a narrative, which involves a pair of fat, pale-faced, aspiring salesmen. 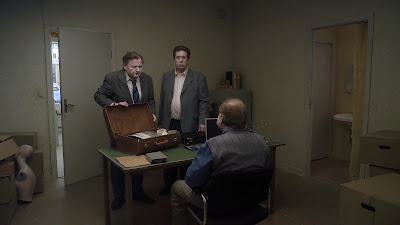 The pair named Jonathan (Holger Andersson) and Sam (Nils Westblom) wander through the film’s vignettes, miserably failing to sell their stock of novelty items. The salesmen with their stone-faces try to sell corny gag items (‘Vampire Teeth’, ‘Laughing Bag’, and ‘Uncle One-Tooth’) to people who have no need for them. Even if they make a sale, they aren’t paid any money. In a deadpan manner, the duo often states their business motto: “We want to help people have fun”. The pair of psychologically depressed men itself become a sad joke, but at some level, we could also empathize with them. We laugh & reflect on the banality of their existence, whose sole aim is just to use comedy to drive off life's despair. 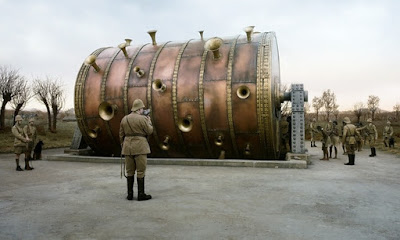 Although, Andersson’s films states that it is about exploring human condition, he isn’t trying to explore myriad of experiences that makes up a human life. His imaginative vignettes, heavily inspired by the theater of the absurd, specifically zeroes in on the isolation & broken-down communication of the modern society. Failing or failed business is a recurrent theme in this trilogy. In “Songs from the Second Floor”, a businessman futilely burns down his shop in the hope of getting insurance. Here, we have salesmen aimlessly stumbling through a sullen city. Despite the fact that Andersson makes his living by making commercials to sell materials, he inherently hates materialism. He subtly links the futility of life to our blatant pursuit of materials. In an interview to UK’s ‘Independent’, Andersson stated this: “In my opinion, in our time, we as humans are moving more and more to being creatures without empathy, because you need to make money through business. So you don’t look at your neighbor as your friend or someone to take care of, you look at him as a potential client.” 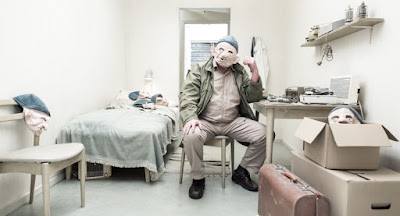 Within his mysterious, enigmatic world, the director always brings out something profound or a shocking rumination of human conduct. Themes of bureaucracy and tyranny reflect through Charles XII episode, a man deeply haunted by history. The break down in communication is another significant theme, which is expressed even through the droll activities of the ensemble. “A Pigeon….” is filled with characters that express a set of words without ever believing in them. Apart from the central character’s punchline of “We just want to help people have fun”, couple of other sentence is kept on repeated: “I’m happy to hear you’re doing fine”; “Some people get up early for work tomorrow.” All the different characters on phone keep on repeating the first sentence, which sort of depicts our shriveled range of words, even when conversing with our loved ones.In one of the film’s great moment, a very old man in a restaurant tries to contact with the waiter during closing time, stating what he missed out as a human: “I understand one thing. I have been greedy and ungenerous all my life. That’s why I’m unhappy”. Even the ending “But it felt like a Thursday” scene is yet another tragicomic portrayal of failed communication. 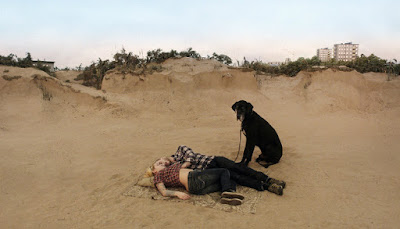 Even if the viewer doesn’t care about thematic overtones, Andersson’s visual sense alone gives an exemplary experience. The visuals veer from being outright hilarious to darkly comic to simply shocking. Since Andersson has shot everything on sets (nothing, including the cafes, is shot on location), he brings a degree of intrigue in all those polarizing visuals. The film-maker equally focuses on sheer jaw-dropping images (like the giant, exterminating device) and less significant visuals, which depicts a more mundane side of human behavior (like the girls blowing bubbles from the balcony). For all the stiffness, rigidity, and grim predicaments, Andersson does imbue gentleness & a feeling of compassion to his proceedings.

“A Pigeon Sat on a Branch Reflecting on Existence” (101 minutes) is a thoroughly unpredictable tableau of vignettes that evokes deadpan laughs through its exploration of existentialism. Those who aren’t bored by this unique mode of film-making might discover ample moments of beauty that resides within the banality & nefariousness of our mundane modern life.