Gett: The Trial of Viviane Amsalem – A Indictment on the Sexist, Religious Bureaucracy 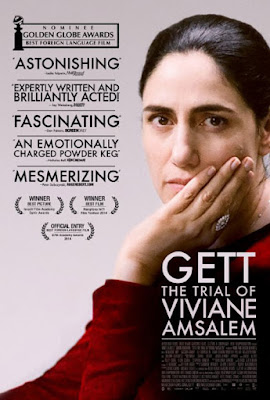 Israeli sibling filmmakers, Ronit Elkabetz and Shlomi Elakabetz’s “Gett: The Trial of Vivane Amsalem” (2014) is fully set inside the confines of a courthouse. But “Gett” isn’t like “12 Angry Men” (1957), where men of different backgrounds come together to serve justice. Here, the main character is just trapped in a bureaucratic void, seeking freedom from a loveless marriage. The film is about the insane obstacles a woman faces in order to get divorce in an Israeli court. Matters of matrimony in the country is not decided by civil courts, but by orthodox rabbis. As per these courts, a breakup can only happen when the husband gives his consent. When the husband says ‘no’, women are just convinced or forced to go back. “Gett” refers to the paper authorizing divorce.

“Gett” is not just an indictment of Israel’s faith-based court system; it also perfectly works as a microcosm of women, who are victimized by malignant partriarchial institutions. Similar to Richard Linklater’s “Before Series”, brother/sister film-making team of “Gett” is following the primary couple characters – Viviane & Eliahou aka Elisha – for the last twelve years in three films. Before this film, there was “To Take a Wife” (2004) and “7 Days” (2008). Viviane (Ronit Elkabetz) is a Moroccon-born Israeli mother of four, who got married in her teens to a very conservative & cold man Elisha (Simon Abkarian). I haven’t seen or heard about these two previous films before watching “Gett” and it isn’t necessary to watch those movies, because “Gett” gives a more immersive experience, if we are encountering the couple for the first time. 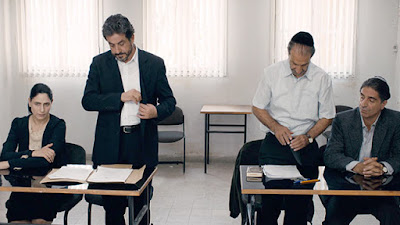 When the film starts in the court room, for the first few minutes Viviane is kept off-screen, while the men discuss about her reasons for getting divorce. Eventually, when we see Viviane’s anguished glares, we know that she just wants out. But, the husband Elisha is too stubborn to give his wife the freedom and let her be happy. The problem for the orthodox judges is that there’s been no physical abuse or infidelity on either side. So, the Rabbis decide to listen to the couples’ friends, neighbors, and relatives to get some perspective for Viviane seeking divorce. However, all the testimonies & arguments often end up judging the anguished woman. Is Viviane too spoiled to appreciate her husband? Does she suffer from mental ailments? And on and on goes the case for five years with Elisha sternly refusing the ‘gett’. 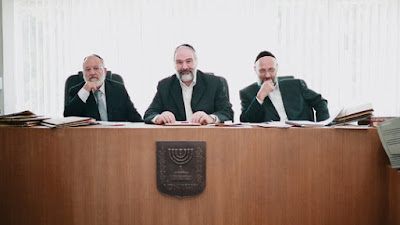 “Gett” wonderfully derives all the drama of what happened in the couples’ 30 year marriage through pondering testimonies and outbursts. The camera, in the first shot itself ignores Viviane’s presence and through that the directors are trying to establish how a woman’s presence or opinion means little in the court. The crummy, claustrophobic, white-walled court room bestows us the trapped feeling Viviane feels in her life. The directors often shoot the judges from a low angel to suggest how imposing and removed these men are. But, the more exciting part is the wonderful point-of-view shots. Elisha and Viviane’s glares are shown in profile shots, indicating how they couldn’t even look at each other. In another scene, a man is summoned to court to confirm Elisha’s empathy & righteous character. But then when the witness addresses 'plaintiff', we get a point of view shot of the man looking at her bare ankles and bright red toenails. 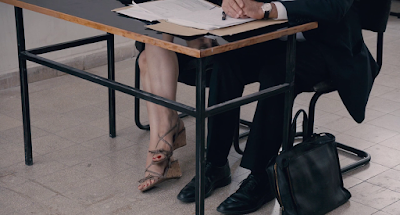 The point-of-view camera angles consciously make us to judge on Viviane. So, the film-makers aren’t just trying to show how easily women are judged inside an Israeli courtroom. As we are watching these pov shots, we the viewers, are also judging her. A central question posed in “Gett” is why does a women want freedom from a pious (but one is unable to show love) husband. Is her demand for freedom is to take off with another, less devout man? At one point, Viviane’s attorney Carmel (Menashe Noy) is accused of being her secret lover. The forlorn POV glances of Carmel towards Viviane are just there to plant seeds of doubt inside the viewer’s mind. If our own inner mind poses such ridiculous questions & doubts, then it means that the film-makers’ has had great success.

As I said earlier, “Gett” isn’t about a random patriarchal society. It is about how women are easily judged, especially when words like ‘freedom’ & ‘privacy’ are uttered from their mouths. Earlier in the film, Viviane wears modest black frocks and her hair is pinned up. But, gradually we see her making bolder fashion choices. I think at this point Viviane is stating that she no longer cares about what men approves, especially when she is already seen as adulteress & wayward for wanting to break from the chains of futile marriage. Ronnie Elkabetz, who plays Viviane, gives a subtle and moving performance. For the most part of, she barely says a word. When witnesses back her she smiles with satisfaction, and when her character is scrutinized, there is a wry smile across her lips. We also see the voiceless, mute panic when the rabbis adjourn the case for another two or three month. Ronit impeccably enacts the outbursts, which brings out all her character’s suppressed pain and disdain. 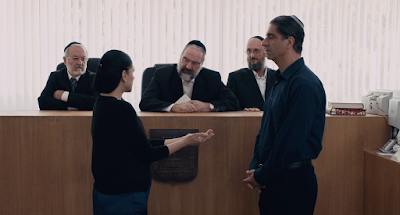 The last shot is also as interpretive as the first, where the camera focuses on Viviane’s ankles and foot as he once again walks into the courtroom. We don’t know if Viviane’s has eventually attained her freedom, but even she if has it is still a bittersweet ending. Not because of that final promise she gave to Elisha; it’s because that she is been set free by the same bureaucracy that deprives women of freedom. So, in a sense Viviane may never fully use her freedom as her activities would always be scrutinized by watchful eyes. As a viewer, we are also judging Viviane even through this end: We are asking ourselves, whether she is going to keep that promise. 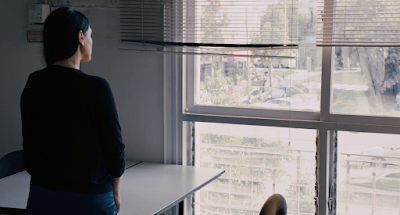 The film is also laced with subtle humorous scenes, especially the one when Viviane’s sister-in law storms the courtroom and talks rapidly to the judges. Despite the different judgmental male characters, “Gett” isn’t the kind of feminist film that says all men are cruel to women, one way or another. In fact all the men in this film are good & religious. But the point, directors trying to showcase is that these two traits doesn’t make a man ‘a good husband’. In the end, when Elisha asks Viviane to promise, we can sympathize with him, because he really loves Viviane but he never knew or was too stubborn to show love.

“Gett: The Trial of Viviane Amsalem” (116 minutes) is a powerful social commentary on patriarchal justice system and a staggering examination of human relationships. The finely etched characters, their ambiguities, and the layered performances give the film a universal appeal.