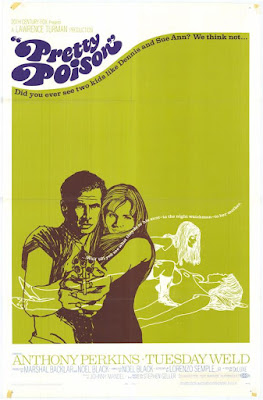 The overwhelming critical and commercial success of Alfred Hitchcock’s “Psycho” (1960) made Anthony Perkins (played Norman Bates) as the go-to-guy for playing disturbed young man in Hollywood. He just got typecast for the rest of his career. Tuesday Weld (“The Cincinnati Kid”, “Thief”, “Once Upon a Time in America”) has started her acting career as a child and later in her teenage years and early 20’s was repeatedly chosen over to play the role of a nymphet. By the 1960’s, she was tired of being typecasted like Perkins. They both were casted to play the central characters in Noel Black’s “Pretty Poison” (1968), which was based Stephen Geller’s novel, “She Let him Continue”. The movie posters boasted tag lines like: “Illusions can be Deadly”; “A shook-up story of the up-tight generation”, with Anthony Perkins’ baleful look. Nevertheless, the film manages to flip-flop a viewers’ expectations.

“Pretty Poison” is an oddity and the events portrayed in it might have shocking for that era. The subsequent imitation of the movie or novel’s plot with other unsavory couples would now make us easily guess the trajectory Noel Black’s film travels, but still it holds up well due to engrossing eccentric performances of Perkins and Tuesday Weld. Although the movie was never a main-stream hit, it has gained a sizable cult following, over the years. The film starts with Dennis Pitt (Anthony Perkins) just getting released from mental institution. Dennis’ crime isn’t explained at the time, but he seems to be smart guy with a lot of fantasies. His probation officer Mr. Azanaeur (John Randolph) tells him about a job in lumber factory and warns Dennis: “These fantasies of yours can be dangerous. Now, you lay off that stuff! Believe me; you're going out into a very real and very tough world. It's got no place at all for fantasies.” 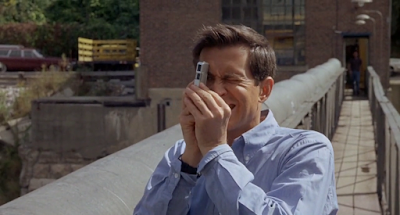 But Dennis the daydreamer couldn’t think about life without broad fantasies. Before long, we see Dennis working as a quality-control guy at a lumber mill, in a small Massachusetts town. He watches over a pretty high school girl, going on about her majorette routine. In the chemical plant, he curiously watches and photographs the out-flowing pipes that pour chemical wastes into local waterways. He is listening to Russian broadcasts from his trailer’s short-wave radio. Later, when Dennis meets the same pretty high senior, we get to know what kind of fantasy he is playing on. The girl named Sue Ann Stephanek (Tuesday Weld) lives with her disapproving single mother (Beverly Garland) and seems to have no friends. She believes Dennis when he says that he is CIA agent, working undercover to uncover a communist plot in the small town. 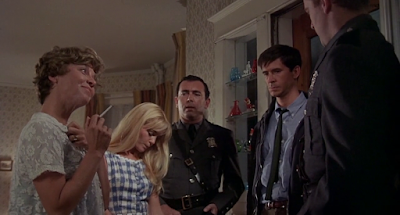 Dennis promises to let her in on his undercover playacting, and Sue Ann is very happy to watch and learn from federal agent. The odd couples also have secret trysts in a place known as ‘make-out valley’. They do make out as Dennis piles lie upon lie, while believes it with a sparking smile. In the mean time, the probation officer threatens Dennis to throw back into institution as he is not neither attending his call nor reporting to him. Eventually, Dennis drafts Sue Ann to join him on his dream mission to sabotage the chemical plant’s waste-pouring pipes. While on the mission, a night watchmen with a gun under his belt, catches Dennis. He is stunned, mulling over the prospect of once again living inside a cell, but suddenly witnesses Sue Ann hitting the watchman at the back of his head with a wrench. She remains gleeful while doing this deed, and innocently asks if the agency would cover her for this. Gradually, from then on, Dennis becomes a mere participant in his own fantasy. 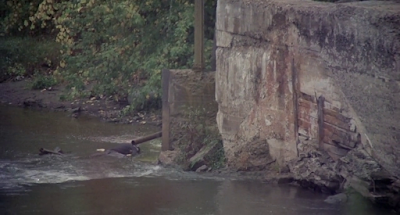 The late 1960’s were the time when morally unpleasing, violent couples made their presence in screen. In 1967 Arthur Penn’s “Bonnie and Clyde” (with Warren Betty and Faye Dunaway) was made and became one of the most controversial crime film of the era (Roger Ebert described it as “Milestone in the history of American Cinema”). Movies like “Kalifornia”, “True Romance”, and “Natural Born Killers” drew inspiration from the exploits of Clyde Barrow and Bonnie Parker. Although “Pretty Poison” doesn’t have a broad scope or robust script like the 1967 movie, it possesses the same kind of quirky chemistry between the central characters that lends an edgy movie experience.  The late 60’s were the time, when American cinema was going through a transitional period. A load of eccentric independent features arrived, expanding the horizons of realism, violence & sex in American cinema. “Pretty Poison” was just wedged between “Bonnie and Clyde” and what touted to be as an anti-Bonnie and Clyde film, “The Honeymoon Killers”, released in 1969 (it was also the year “Midnight Cowboy", an X-rated film, won Oscar for best picture). 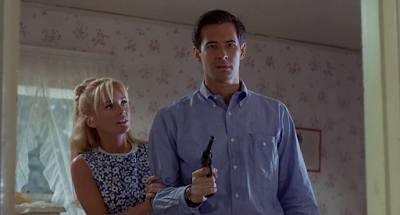 Director Noel Black includes the typical zooms and few seconds flash-back sequences in “Pretty Poison”, which were the much utilized techniques of that era, although Noel doesn’t film violence in a brutal and pitiless manner, unlike other killer flicks of 60’s. The scenic small town atmosphere and the cynical minor characters of the town somehow seem to have anticipated Lynch’s portrayal of such towns. However, the film wouldn’t have worked if not for the casting of Tuesday Weld. She easily comes off as a white-bread American girl, but her transformation into a blood-lust girl with no troubled conscience is thoroughly convincing. The script is designed to gradually reveal the inversion of Sue Ann’s Dennis’ roles and Weld elegantly takes charge of that driver’s seat.
Anthony Perkins’ superior smirks and smart answers were a joy to watch. He also perfectly displays the confusing emotions as his fantasy and bravado, gives way to spiraling panic situations. There is a little misogynistic message in the end about how beautiful, clean-cut girls end up being the most poisonous and screw up the lives of naive, innocent men. May be we could attribute this message to the jaded cynicism of the American 60’s or as an unforgivable imperfection or look it as a continuation of the movie’s dark central joke. Whatever it is, “Pretty Poison” (89 minutes) worth a watch for its psychological implications and engaging central characters.