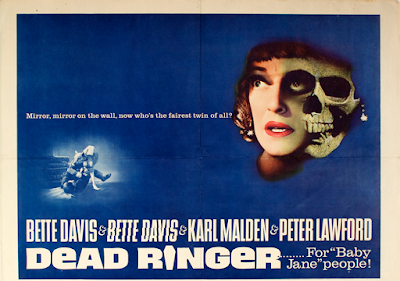 The instant critical and commercial success of Robert Aldrich’s “Whatever Happened to Baby Jane” (1962) more or less gave birth to a new sub-genre. “Baby Jane” was about two faded, sibling actresses (played by Bette Davis and Joan Crawford), residing in a decaying Hollywood mansion. The film tracks the downward spiral of Jane’s mental health as pent-up guilt and antagonisms take over. Despite being a psychological thriller, “Baby Jane” had quite a few thematic similarities to Billy Wilder’s ever-green classic “Sunset Blvd.” (1950). The incredible success of this film brought back many other older actresses to silver-screen for similar projects. Black comedy, revenge, and melodrama became the significant elements of these films, and colloquially the sub-genre was termed as ‘Psycho-biddy’.

However, the interest for such thrillers (criminally insane women with a glamorous past) fizzled out in the late 1960’s and early 1970’s. Critics who were fed up with this kind of narrative nicknamed the genre “hag horror” & “hagsploitation". In 1964, Bette Davis re-united with director Robert Aldrich for “Hush ….Hush, Sweet Charlotte”, touted to be a follow-up for “Baby Jane”. Aldrich marvelously used the Southern Gothic atmosphere to concoct a superior thriller. In the same year, Bette Davis also starred in a much under-rated Hitchcockian thriller “Dead Ringer” (1964), directed by Paul Henreid (Victor Laszlo in “Casablanca”). After the success of “Baby Jane”, a Warner Bros. ad is said to have stated that “Nobody's as good as Bette when she's bad”. And, in “Dead Ringer” Davis is doubly menacing as she plays the role of identical twin sisters Edith and Margaret. 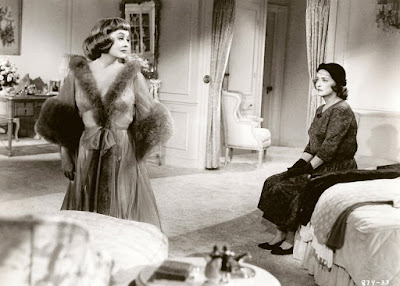 The poster for “Dead Ringer” features Bette Davis’ eye merging with an image of a skull, although this isn’t a campy horror film. The acting and script are impressively subtle, when compared with similar thrillers of that era. Edith Phillips reunites with her estranged twin sister Margaret DeLorca at the funeral of Margaret’s wealthy husband, Frank, who is said to be died of heart-attack. Edith has come to the funeral because she has loved Frank and hates Margaret for seducing him away from her. Soon, Edith learns (through an information provided by family chauffeur) that eighteen years before, her sister has faked a pregnancy to get hold of Frank’s rich life-style. Edith owns a small cocktail lounge, and lives upstairs in a decrepit one-room apartment. 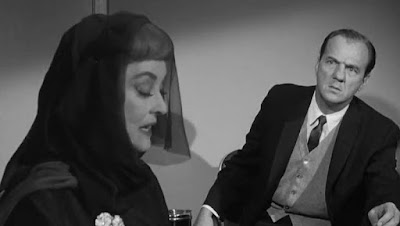 Edith doesn’t make enough in her business to even pay rent for the place. She is loved by Sergeant Jim Hobbson (Karl Malden), but Edith is fed-up with her onerous life and is clearly disturbed by the past acts of deceitful Margaret. Instantly, Edith concocts a plan to steal back the life, she should have lived with Frank. She calls Margaret and states that she knows everything about her ‘pregnancy’. Margaret arrives in Edith’s place to smooth-out things. But, Edith has a suicide note ready, and kills Margaret. She assumes her wealthy sister’s identity and travels to the huge mansion. The large part of the narrative showcases how Edith tries to fool her twin sister’s patrician friends. Edith also gradually realizes that she is in a very complicated & dangerous situation and that she was happier in the former life. 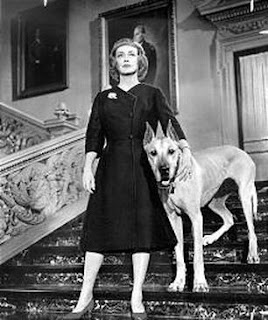 Director Paul Henreid was a television director and he made episodes of ‘Alfred Hitchcock Presents’. Considering the very low budget & rapid shooting phase, director Henreid has impeccably brought the brooding sense of dread, which is must for good psychological thrillers. Albert Beich’s script that is full of twists and turns has also aided in keeping the viewers engaged. The great part of suspense in “Dead Ringer” lies in the way Edith confronts people, whom Margaret knew intimately. She is afraid that the household staff might notice some changes in their employer’s demeanor. She has to remain detached as Sergeant Hobbson regrets that he hasn’t shown enough love to stop the suicide. But, Edith’s final bigger test lies with the arrival of despicable character, Tony Collins (Peter Lawford) and his relationship with deceased Margaret only make her to yearn for the old, simple life. The script also doesn’t paint the sisters plainly as good and bad. 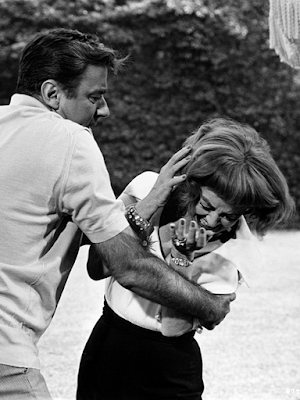 The plot does possess some campy moments, especially the way Edith stages her fake suicide. However, the film also doesn’t fully belong to the aforementioned ‘psycho-biddy’ genre, since there isn’t much blood and the thriller elements are more subtle rather being gruesome or shocking. Edith’s time inside the decaying mansion (playing board games and meeting for religious sermons) and her discoveries there puts us in a contemplative mindset rather than thrilling us, just for the sake of it. The end twists are a bit predictable, but Edith’s final decision and the way Davis carries her character makes it work on all levels. Of course, the film would have been reduced to a banal cinematic piece, if not for the sheer presence of Bette Davis. Through little alterations in mannerisms and voice, the veteran actress perfectly convinces us that Edith and Margaret are wholly different persons. Davis displays her versatile acting skills in an earlier scene, when the estranged twin sisters fight verbally.

“Dead Ringer” (115 minutes) might have a timeworn plot, but a good script and formidable Bette Davis reins in the psychological implications of impersonation. It is an engaging, old-fashioned Hollywood thriller.