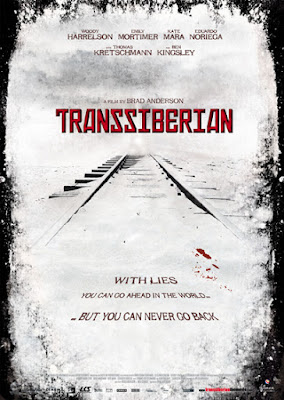 Denial of truth and trust issues are the recurring themes in American film-maker Brad Anderson’s movies. His protagonists often have something to hide: a dark past or a life-changing secret. In “Happy Accidents” (2000), the central character reveals to his lover that he is a time traveler from the year 2470. In “Session 9” (2001), the protagonist’s homicidal paranoia uncovers a dark secret. In “Machinist” (2004), Christian Bale’s insomniac, factory worker character starts to question his own sanity and seeks the truth about the bizarre things happening to him. In the mediocre, ‘Shutter Island-wannabe’ thriller “Stoneheart Asylum” (2014), once again the plot hinges on the dark past of its maniac hero. Of course, Brad Anderson neither scales profound depths to impeccably realize his themes nor his characters arise out of the confined genre formulas, but his films do provide fine entertainment (Anderson’s “Vanishing on 7th Street” (2010) and “The Call” (2013) are archaic genre piece, which didn’t interest me).  And, Anderson always tries to put his psychologically perplexed protagonist through different genres. In his less talked about and twist-filled thriller, “Transsiberian” (2008), the director concocts a train odyssey which is loaded with Hitchcockian overtones.

Except for the last twenty minutes, “Transsiberian” remains as a dynamic thriller about human weakness and strengths, set against a beautiful, refreshing as well as a stark backdrop. The film opens in Vladivostok, Russia, where narcotics division detective Grinko (Ben Kingsley) investigates a drug-related homicide. The drugs and money from the safe of a small time drug dealer seems to be missing. Then, we are introduced to American couple, Roy (Woody Harrelson) and Jesse (Emily Mortimer), who are in Beijing for a church-based mission. Roy looks like a gregarious and unbelievably upbeat guy, whereas Jesse is more introverted and happier to watch people through her camera lens (she takes fine photographs). Their mission in Beijing is over and the priest gives a sendoff speech that goes “ours is not a gray world. Under the bright light of truth, it is a world of clear contrasts”. Jesse doesn’t seem to believe in this, which tells us that there might be some dark truths within, entrenched in her psyche. 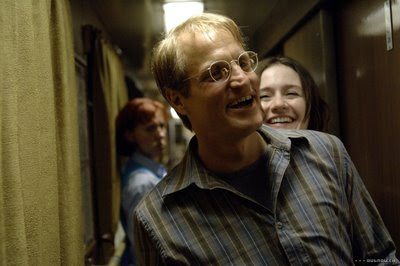 Roy, the train enthusiast, wants to have grand adventure with his wife, riding in the Transsiberian Express on a six day trip – from Beijing to Moscow. Jesse is happy for him, although not as jubilant as Roy, who hoots at the arrival of every station. Nevertheless, Jesse’s interest picks up when a younger couple arrive to their cabin. Carlos (Eduardo Noriega) is a charismatic, smooth-talking Spaniard who immediately gains Jesse’s attention. His much younger partner Abby (Kate Mara) wears heavy eyeliner and gives a vacant stare which obviously hints at a darker past. As Roy goes on making friends or at least grins at everyone he meets on the train, Carlos’ blatantly inviting foibles, in a way, appeases the bad girl within Jesse. At one point, Jesse and Abby have a conversation about their past mistakes, and Jesse admits her dilemma about starting a family with Roy (who has rescued her from those mistakes). Apart from prodding Jesse, Carlos too has a secret in the form of Russian nesting dolls. Soon, Roy gets separated from Jesse, and our conflicted heroine travels more into the darkness. Detective Grinko and his shady partner Kolzak (Thomas Kretschmann) are trying to follow the activities of these four to fulfill their own secret purpose. 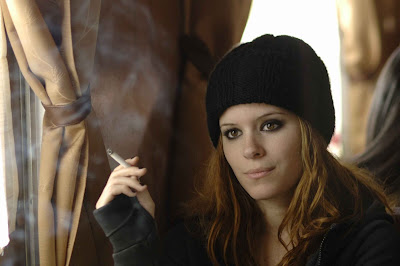 The basic premise of “Transsiberian” is mounted on an age-old Hollywood cliche: if you are an American tourist traveling through economically bedraggled nations, trust nobody. And in thrillers like this, coincidences always wait around the corner to diffuse new twists. Director/writer Anderson (co-writer Will Conroy) doesn’t transcend these pitfall elements, but he has delivered enough tension and developed the characters well (up to a point) that we don’t concentrate much on this inherent banality. A lot of dialogues in the movie are well-written and perfectly forwards the characters’ thoughts.  Tennesse Williams’ “Kill of all my demons, and my angels might die, too” and Grinko’s wisdom “With lies, you may go ahead in the world, but you may never go back” are some of the lines worthy of quoting. The significant aspect of Anderson’s script is how he brings out the thriller elements through Jesse’s characterization rather than through false ciphers. The truth about Carlos is pretty evident when he shows Jesse those dolls (at least for me), but unlike most thrillers, the writer is rounding up the primary characters’ emotional arc rather than throwing in fresh twists. And, for the large part the twists are natural, which were all little wasted by the unnecessary Hollywood heroics in the film’s last twenty minutes. 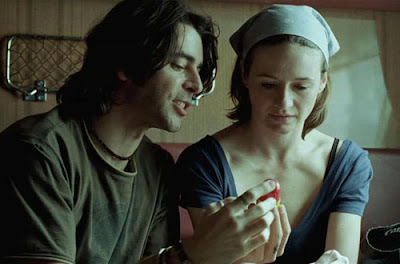 In a way, director Brad Anderson must have known that his basic story is a cliche. He may have jokingly addressed this towards the ending. As Roy is shoved by Grinko for interrogation, he snivels “but we’re Americans!” It is a chuckle-worthy moment, where the director seems to say that we are in for a happy ending, however the stark the situation is for the American couples. The well-constructed suspense and psychological dilemmas are eventually overthrown to show the American bravado through a bothersome train stunt. Emily Mortimer as Jesse flawlessly digs into her flawed, nesting doll-like character, but few of Jesse’s actions in the end (to provide that final twist) simply annoy the viewers.  Despite wearing the cloak of train-based thriller, it is evident that Anderson wanted “Transsiberian” to be a morality tale about the devastating consequences that follow a person, who fails to take responsibility for their actions. Still, Jesse hiding a vital truth from Roy and imparting a truth on Abby (Abby finding ‘things’ at that crumbling, snow-covered church is too much of a happy ending) makes us question the characters’ prevailing morals. The directorial skills of Anderson don’t have such flaws as he brings a crackling vibrancy to the proceedings. Mr. Anderson, who had made similar train journey in his younger years, has really down well in shooting at real locations. His framing of the geography and journey adds a lot to the threatening mood and mystery.

“Transsiberian” (112 minutes) is a slow-burning thriller that is well characterized and engrossing enough to make us look past the obvious cliches. If it had avoided that awkward hand-wringing in the climax, it would have been a more impressive thriller.

I feel it is a little more than entertaining! :-)