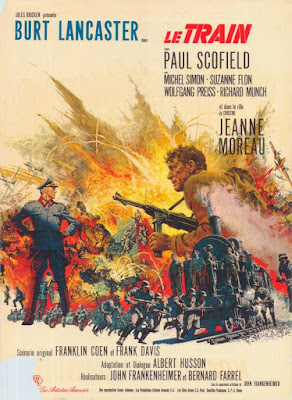 John Frankenheimer’s WWII action/thriller “The Train” (1964) is the kind of film that immediately make us say ‘they don’t make them like this anymore’ or maybe they try to do, by sacrificing the soul of a movie to include ingenious set pieces or visual effects. George Clooney’s 2014 WWII drama “Monuments Men” showcased an unlikely group of men & women (the impressive cast included Matt Damon, Cate Blanchett, John Goodman, Bill Murray) trying to rescue the stolen pieces of art, from the hands of Nazis, before being destroyed due to Allied incursions. “The Train” boasts a similar kind of plot, where a group of simple men of working class desperately try to save France’s national pride. Did “Monuments Men” generate lukewarm response because it was made nearly seven decades after the end of WWII? May be. Although the two films belong to different genres, the main reason for “Monuments Men’s” flop is because its slack narrative totally lacked a soul. After Buster Keaton (in “The General”), director Frankenheimer got the rare chance to play with the majestic machines. And despite the jaw-dropping directorial craft (those tracking shots & depth of focus are unforgettable), “The Train” strengthens its masterpiece status for the manner it makes the characters to play an integral part.

The film is based on the novel by French art historian Rose Valland. It was adapted to screen by Franklin Coen & Frank Davis, and writers Walter Bernstein & Howard Dimsdale also contributed to the script, who were uncredited. Arthur Penn (later made “Bonnie & Clyde” & “Little Big Man”) was set to direct the film, but he got fired due to his differences with Burt Lancaster. Frankenheimer, who previously made successful political thrillers “The Manchurian Candidate” & “Seven Days in May”, took over the reins, transforming Penn’s low-key vision into a technically intimidating action picture. Pen is also a great director and his vision was said to be more character-oriented. But, despite adding up the action quotient, Frankenheimer in “The Train” doesn’t chuck away the complex questions raised by villain Colonel Franz von Walheim. It is the kind of action flick, when the hero wins over in the end, we don’t go wow, but rather spend the next few minutes, contemplating on the relative value of art and human life. 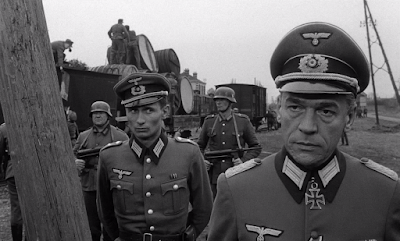 The film is set in 1944, Paris, where the French people are awaiting for the impending arrival of Allied forces. In the astounding, opening tracking shot the camera cruises through chaotic climate and settles on sentries, standing duty before the German headquarters. The vehicle carrying Staff Officer Walheim (Paul Scofield) gradually arrives into the frame and the Colonel enters the building to look at his horde of art treasures. He is enamored by it, but he calls them as ‘degenerate art’ to museum directress Villard (Suzanne Flon). The cultured as well as arrogant Colonel Walheim has already set in motion a ‘rescue’ plan to load all these France’s pride into a train and take it away from besieged Paris to Germany. The museum curator, who is in league with the French Resistance, runs to them hoping for a plan to delay the train’s departure until the Allies can save them. Initially, the German high command doesn’t take Colonel’s paintings seriously. Their top priority is to transport military vehicles into Germany, but when the Colonel talks about the money the high command could make of these paintings, he is immediately given the green signal. 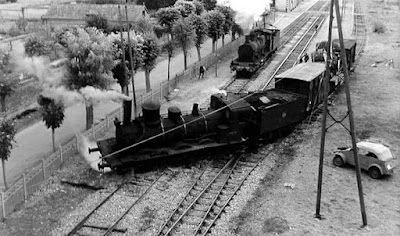 Labiche (Burt Lancaster), the ambivalent station master & top member of French Resistance doesn’t see the need to risk a lot of lives for few art pieces. He thinks it would be easier to blow them up. The Resistance also has very few men to dedicate to this mission. Labiche goes on about his station master work, when things change in the form of Papa Boule. The beloved French worker Boule, well known to Labiche, is executed after his attempt to sabotage the art train. Colonel Walheim knowing about Labiche’s efficiency orders him to personally deliver the art train to Germany. This incident sets up for the main course of action, where Labiche and two of his cohorts driving the Engine plus hundreds of unknown railroad workers come together to set in motion, an elaborate plan to save the cultural heritage.


Without mincing words, one could easily declare that “The Train” is one of the best black & white action movies in the history of cinema. Frankenheimer’s wide-angles, tracking shots, invisible dolly shots, camera cranes wonderfully depict the coordinated activities of railroad men, on a much grander scale. The way Frankenheimer and his Production Designer (Willy Holt) decorated the set to create that realistic feel is nothing short of amazing. These are the days, when a film-maker wants a huge armored vehicle to dress up the background, a team can make it up through visual effects (of course, there’s no doubt that the special effects isn’t an easy task). But, in those days of practical effects, it is hard to believe the amount of details the technical crew has achieved. The two locomotives colliding at each other near a railway crossing, plus the final sabotage attempts by Labiche makes up for the movie’s most unforgettable set pieces. But, the depth of focus, Frankenheimer shows even in the film’s trivial moments is something on the level of masters like Kurosawa. Huge rail cranes, armored train engines, massive cannons, and much more real railway hardware are deeply framed, adding to the genuinely organic chaotic activities. One of my most favorite tracking shot in the film happens at the end, when Colonel tries to stop a convoy & command them to load the paintings. The camera moves left & right, before fixing upon the argument between Colonel and the convoy’s officer. The camera once again moves as the convoy officer barks orders, and gradually with a good tilt effect, it finally settles on colonel Walheim’s face. And in those entire beautifully orchestrated camera movements, nothing in the background goes out of focus. 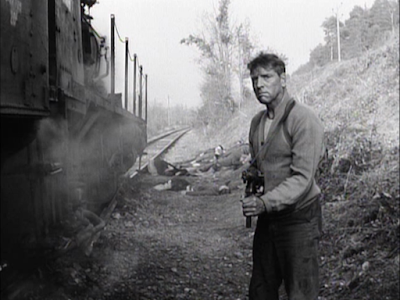 Director Frankenheimer never goes for fast-cutting, while filming the action sequences. He also never gives us moments to marvel at hero’s super human strength. Burt Lancaster’s athleticism is very good, but what we marvel more is the director’s precision in envisioning each shots to build the chaotic atmosphere. This precision and authenticity brings to mind the era’s great French film-maker Jean Pierre Melville (one of the “Train’s” cinematographer Walter Wottitz later worked with Melville in “Army of Shadows”).The director & writers were also sensible in designing the final confrontation between Walheim and Labiche (the aristocrat status of villain and the working class status of hero gives a fine emotional subtext to the proceedings). It is almost unbelievable to see a Hollywood film, where the hero doesn’t verbally retort to villain’s incendiary speech (“A painting means as much to you as a string of pearls to an ape. You won by sheer luck: you stopped me without knowing what you were doing, or why. You are nothing, Labiche -- a lump of flesh. The paintings are mine; they always will be; beauty belongs to the man who can appreciate it. They will always belong to me or to a man like me. Now, this minute, you couldn't tell me why you did what you did”). And, the image that follows Labiche’s answer to the Colonel starkly states the film’s message without any lame dialogues. The camera closely observes the corpses, littered in the tracks and the crates of paintings left out in the open. The juxtaposed images of corpses & crates make us feel that both are being weighed, aesthetically, putting forth the question: Are French art worth preserving so as to sacrifice the lives of dozens & more?

John Frankenheimer’s under-appreciated masterpiece “The Train” infuses serious, contemplative themes into an adrenaline-pumping action flick. Its technical achievements are in itself an invaluable art for the cinephiles.

The Train (1964) -- IMDb
at May 02, 2016
Email ThisBlogThis!Share to TwitterShare to FacebookShare to Pinterest
Labels: Hollywood Movies, Thriller