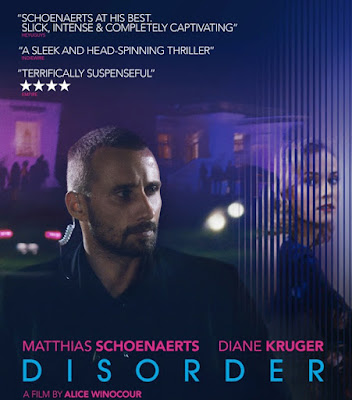 Matthias Schoenaerts is one of the best contemporary actors to convey sensations that aren’t easy to express through words. His mournful eyes and hulking physique often pins us to see things through his characters’ physical perceptions. Schoenaerts often and skillfully plays roles that carry anxiety and burdensome past. So, the PTSD-afflicted French Special Forces soldier Vincent in Alice Winocour’s Disorder (aka Maryland, 2015) is a perfect, tailor-made character for him. He is one of the strong reasons to watch this expertly crafted low-key thriller. Disorder’s atmosphere and sensorial perspective reminds us of the works of many cinematic masters: Hitchcock, Michaelangelo Antonoini, Chantal Akerman, Lucrecia Martel, Brian De Palma, etc. The protagonist’s keenly observing nature in an increasingly chaotic atmosphere brings to mind the predicament of Harry Caul in Coppola’s “The Conversation”. Although Winocour’s film has a very limited scope, unlike the works of cinematic masters (“Blow-Up” or “Vertigo”), it still remains as an fine hybrid of art house and generic elements.

Alice Winocour’s primary intention in Disorder is to take us inside the dark subconscious of a traumatized soldier. She makes us see through those agitated eyes, expecting danger from all the corners. The generic thriller part becomes secondary. In fact, she doesn’t bother much about answering the whys & whats. If you are expecting something in the vein of Taken, you would be sorely disappointed. When we first see Vincent he is jogging with his troop; the fatigued eyes nervously eyeing the surroundings. The rhythmic, intense soundtrack from techno artist Gesaffelstein and the over-the-shoulder shots swiftly takes us closer to observe this observer. In the quiet room of a physician, Vincent couldn’t place the direction of beeps he is mildly hearing. After failing the hearing test, Vincent is temporarily kept out of Special Forces. We could understand his alienation and the fear of facing peaceful society, when he calmly says with melancholic eyes, “I want to go back.” 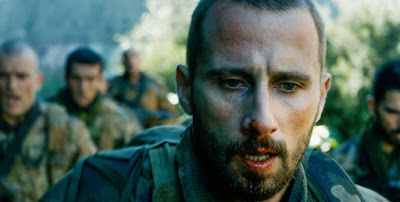 In the hiatus period, Vincent takes up his friends’ offer to be part of private security force, guarding a filthy rich Lebanese businessman Whalid’s gated villa “Maryland”. His first gig is to be the watchdog at Whalid’s extravagant party. He piercingly gazes through the security monitors, although he rarely watches people straight in the eye. Looking from his perspective, the lavish interior house seems to possess dangers that aren’t visible to other’s eyes. Not only his eyes, his mind expects for something worst. The tidbits he picks up about Whalid’s background and the passing conversation of strangers in the party builds some kind of conspiracy at the back of his mind. There’s a reference to Whalid’s involvement with weapons trading and French Foreign Minister. A news clip insinuates a corrupted connection between Whalid and the minister. Of course, we perceive these small information alongside Vincent’s panic attacks and growing paranoia (there’s ringing noises and his body often convulses). In one sequence, Winocour gives us a slo-mo shot (full of extreme close-ups) as Vincent gazes at jubilant members of the banal garden party (populated by politicians and models), looking for something lurking in the dark. He is only calm while petting at the rich family’s dog. 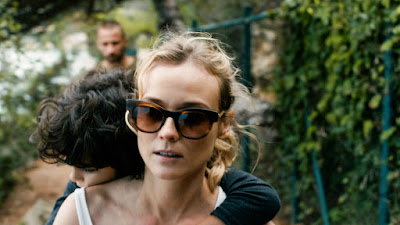 Whalid’s beautiful, delicate wife Jessie (Diane Kruger) often crosses Vincent’s vantage point. But, Winocour’s camera keeps a distance from her. The director concentrates on how Vincent’s feelings are aroused or transformed while gazing at her. There’s only one odd-shot of him looking at her bare legs. There’s none of those ogling shots to take in the shape of her breasts. The first time we see Jessie (in her bare-backed flower print dress) giggling at the party, she comes across plainly as a trophy wife. But the subsequent frames look at her unglamorized, humane side & suppressed anxiety. Vincent’s paranoia is all set to burst out when he is hired to be bodyguard for Jessie and her little son Ali, as Whalid is about to go on a business trip to Geneva. Will his imaginary dangers occur in the reality? Will he succumb to his anxiety and fears? For a time, Disorder looks like exploration of Vincent’s inner tumult, but the narrative shifts its gear when the menace is abruptly externalized, in the form of masked intruders.

The possibility of a romance and the shared melancholic gazes brings to mind the terse surroundings of Refn’s “Drive”. While Winocour excellently stages the clear-eyed action sequences (with tight framing), her mixing of genre elements aren’t as robust as in “Drive”. But even without making such overt comparisons there seems to be something deeply frustrating about “Disorder”. It is quite true that the film keeps on subverting our expectations, rejecting a sense of closure. It maybe because there’s less of Vincent’s specificity (in the third act) and more of the external threat of violence. Formally we could make the connection between Vincent smashing the ice (in an early scene during the party) and smashing the head of ski-masked intruder (in the final scene). The transformation is evident and the internalized chaos bursts through the surface (he fails to control his body). But still a little lack of profundity in the final act gives me a mild dissatisfaction. The adept direction, of course, partly outweighs those kinds of flaws. Winocour never over-plays the increasing closeness between Jessie and Vincent (even the kid Ali keeps up the distanced look). When Vincent’s out-spoken friend openly flirts with Jessie it looks odd because much of the powerful dynamics between the two central characters are created through interrupted, unspoken gazes. Perhaps the biggest strength of the film is the portrayal of Vincent’s vulnerability. Winocour digs deep through the action-hero physique of Schoenaerts to place viewers inside his psyche. I’d very much like to see her working in a broader framework, weaving similarly notable, existential themes.

Disorder (99 minutes) incorporates elements of the stylized genre thrillers to take an unflinching look at a shell-shocked man’s progression towards his breaking point. The beauty of this thinly-plotted film lies in experiencing how it all plays out.

at August 01, 2017
Email ThisBlogThis!Share to TwitterShare to FacebookShare to Pinterest
Labels: Thriller