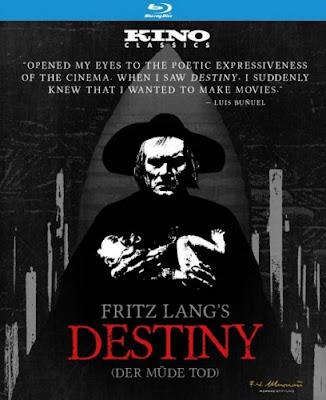 Destiny (aka ‘Der mude Tod’, 1921) was eighth film for FritzLang, one of the luminaries of silent-era film-making. He made his directorial debut in 1919 (the first two of his films are lost). His first successful film was ‘The Spiders Part I: The Golden Sea’ (1920). But it was from the influential expressionist movie Destiny, Lang started to deeply focus upon his favorite visual and thematic motifs (which later became his trademark elements). Mr. Lang’s films repeatedly hover around themes of life, love, salvation, death, and afterlife. From a visual standpoint, he deftly employed expressionistic imagery to attune to the emotions of his characters. Lang’s visual concepts and perfect execution proves us why silent films provide greatest visual experience than many of the sound pictures. The surreal and mythical quality found in Destiny were later found in vast proportions in his future silent masterpieces like Dr. Mabuse (1922), Die Nibelungen (1924), and Metropolis (1927).

The German Expressionist movement mostly delved in horror and crime genres and the making of Destiny alleged to have caused its shift towards fanciful realms. Moreover, the film is now accompanied with tagline ‘The movie that inspired Hitchcock and Bunuel’. Destiny didn’t enjoy commercial success immediately after its release. Swashbuckling American hero Douglas Fairbanks bought the film’s American rights in order to liberally borrow scenes for his ‘The Thief of Baghdad’ (1924). Structurally, Lang’s movie was inspired by D.W. Griffith’s Intolerance (1916 – which was also a big commercial failure and had more complex structure than Destiny) and Carl Dreyer’s Leaves from Satan’s Book (1920). Lang and his wife/co-scriptwriter Thea von Harbou designed the story by foraying through mythological works and tales of Brothers Grimm. Although the film has influenced many great masters of cinema through its visual specter, its story line is very simple. In fact, Destiny makes up for one of Lang’s most accessible work (he made 46 movies including post-silent era classics like M, Fury, The Big Heat and few very dry art movies). 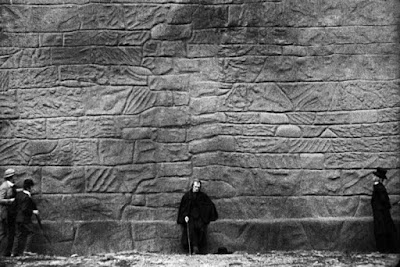 The film was digitally restored by using fragments of various prints. The orchestral score by Cornelius Schwehr impeccably sets up the mood to experience the haunting visuals. The film opens with an interesting subtitle: ‘A German folk story in 6 verses’, indicating the traditional folklore structure. From a narrative standpoint, each divided verses neatly formulate the fanciful story. The central tale is set in European rural town, where a young happy couple (Walter Janssen and Lil Dagover) traveling in a stage coach meet a tall, mysterious stranger (Bernhard Goetzke). A short flashback reveals that the intimidating stranger has taken up residence in the small town near the cemetery. He chipped off the initial resistance of the local Councillors to sell the land by paying with gold. Once the municipal sold the land, the stranger builds a towering wall with no visible entrance. The Councillors are left to gossip in the town’s favorite local inn -- the Golden Unicorn. The couple and the stranger arrive to the inn, where soon the young woman’s fiance disappears along with the stranger. 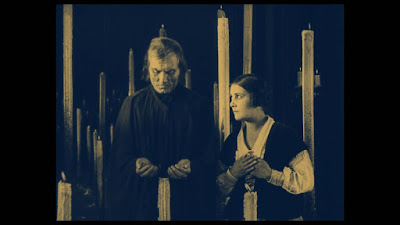 The woman soon finds the secret behind the stranger’s huge wall. She comes across ghosts and spirits approaching near the wall and her fiance is part of the group. The woman is rescued by an old apothecarist. Later, the young woman drinks vial of poison with the hope of seeing her fiance. However, the tall stranger says that her time hasn’t yet arrived. She begs the stranger or grim-reaper or death to give back her fiance, citing the Bible verse “love is stronger than death”. The death takes her to his domain – a huge room filled with candles of different size. The flickering candles symbolize the life burning away in each person. In a special effect that’s reminiscent of George Meiles’ camera trick, the death moves the flame from the candle upwards which dissolves into the body of a naked child that soon vanishes in order to indicate that the child has passed away. Furthermore, moved by the woman’s appeals the weary death puts forth a challenge: three people are soon destined to die in three different realms and death asks her to save them, if possible, through love. The narrative then leads to three separate stories, set in a Muslim country, Renaissance-era Italy, and mythical China (Maurice Tourneur, who largely influenced Lang, made a classic silent movie titled ‘The Blue Bird’ (1918) which also had similar enjoyable flights of fantasy).

What’s astounding about Lang’s silent films are the visual scale and details which even the modern film-makers couldn’t dream of achieving, despite all the state-of-the-art technologies. The shot of death’s humongous room with candles and the giant door-less wall is really an enchanting achievement for its time. The artifice in the three miniature fantasy tales plus its racial stereotyping seems largely out-dated, but even in those scenes the geometrical precision in the staging continues to fascinate us. Furthermore, each of these exotic tales has distinct sets and costumes (for the Arabic tale the inter-titles are presented in pseudo-Arabic style). Set designers Walter Rohrig and Robert Herth were responsible for creating the majestic abstract imagery of expressionist movement (their works include Cabinet of Dr. Caligari (1919), The Last Laugh (1924), Faust (1926), etc). One of Lang’s trademark imagery (also confirms to expressionist movement’s imagery) that originated in ‘Destiny’ is staircases, clocks, and bridges -- the elements which indicate the character’s passage or journey (external as well as internal). Of the three fantasy tales within the central story, my favorite one is the Chinese magician’s tale. Although all the three tales are about star-crossed lovers stricken by fate, the Chinese one had many intriguing special effects: for example, the march of miniature soldiers and surrealistic shot of old magician transformed into a cactus. Director Lang also experimented on lot of shots in the movie. The best among them is the final visualization of a burning house shot at night time. 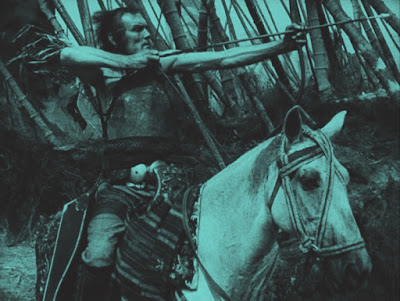 Apart from the awesome visual style, the film’s enduring appeal resides in the humans’ persistent fight or negotiation (and eventual loss) with unappeasable death. The lovers (Dagover and Janssen) in the central tale reprise similar roles in the three fantasy tales, while daunting death play the role of villainous fate. The performances of lovers are easily forgettable, but Goetzke’s personification of death is so powerful. This character later served as inspiration for Bengkt Ekerot’s popular portrayal of death in Bergman’s The Seventh Seal (1957). Goetzke’s eerie presence, hard stares, and tired external features precedes other haunting faces of the era (like Max Schreck (Nosferatu), Emil Jannings (Faust), Maria Falconetti (Passion of Joan of Arc), Peter Lorre (M), Boris Karloff (Frankenstein), etc). In the Senses of Cinema article on Destiny, Mr. Michael Koller describes Goetzke’s performance through these spellbinding words: “When Goetzke stares blankly at the camera, an eerie extra-diegetic element is added to the film. Goetzke is staring at the audience, but also into the void that is eternity and death……….Death’s loneliness is palpable and frightening. And truly unforgettable.”

Fritz Lang’s Destiny (98 minutes) is a remarkable classic of German Expressionism. It’s got lot of emotions and innovative aesthetic motifs which must relish silent-film lovers. It’s one of the earliest cinematic works to entertain us through the splendid art form and also makes a valid statement about humanity.

at August 04, 2017
Email ThisBlogThis!Share to TwitterShare to FacebookShare to Pinterest
Labels: Silent Cinema