Maciej Pieprzyca’s crime/drama I’m a Killer (‘Jestem Morderca', 2016) is based on the real-life hunt for notorious Polish serial killer known as ‘Zaglebie Vampire’, ‘The Silesian Vampire’ or simply ‘The Vampire’. Between 1964 and early 1970s, Zdzislaw Marchwicki was alleged to have brutally killed fourteen women between the towns of Zaglebie Daborowskie and Upper Silesia (south & southeastern part of Poland). Zdzislaw Marchwicki was caught in 1972, sentenced to death in 1975 (after a long trial), and was executed in 1977. During the trial and even after Marchwicki’s execution there were many doubts about whether he is the real ‘vampire’ killer or just framed by prosecution and police officers. Director Maciej Pieprzyca in 1998 made a TV documentary under the same title to explore the truth behind Marchwicki’s conviction. He depicted how there were lot of inadequacies in the investigation and how some evidence were totally fabricated. Now the director returns to the same premise, but strongly focuses on human & societal side of the incidents. Although the background material for I’m a Killer (2016) remains the same, Mr. Pieprzyca has introduced fictional elements to smooth out the narrative flow and thematic reflections.

The movie opens in 1977 in a mortuary with a man making face cast from a fresh corpse. In the background Polish radio announces about strong, prosperous, and thriving new Poland. This was the Polish era of silent media as news programs were crowded with communist regime's propaganda of success. Although the ‘vampire’ serial-killer doesn’t boast a direct political connection, this perceived image of an ideal state is repeatedly proven to have obstructed the truthful path in the case. The prologue is cut to September 1972, a  grey morning set in the backdrop of wet industrial wasteland. A woman lies in the ground, her face caved in. She is the tenth victim of the elusive serial killer. But the identity of this latest victim brings huge media and government attention. She happens to be niece of First Secretary of the Communist Party. The regional militia faced with immense pressure, names young lieutenant Janusz Jasinski (Mirosław Haniszewski) as the head of investigative team. The inexperienced Janusz feels he is up to the task, although would also be the  perfect scapegoat for militia if he fails. 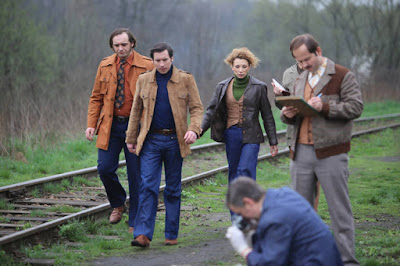 Janusz is bestowed with largest team of detectives although apart from few rookie detectives most lack the sense of urgency to pursue the killer. Ambitious Janusz seeks the help of English criminologist’s guidance to psychologically profile the serial-killer, despite his superior’s disapproval. He also employs then ground-breaking technology of computers to narrow down the suspects. Janusz also announces a reward of one million zlotys for any one who could provide clues about the murderer. Yet his strong sense of duty doesn’t stop the killer’s lust for blood. The serial murderer breaks the skull of two more women, one in the park, right under the nose of a police sting operation. Eventually the police force zeroes-in on a bearded laborer Wieslaw Kalicki (Arkadiusz Jakubik) who initially seems to fit the killer’s profile. Kalicka’s unfaithful wife Lidia (Agata Kulesza) testifies that her husband burned some shoes at the house. Kalicka, apart from the thousand-yard stare and quick-temper, is characterized as a ardent football fan and a very loving father (he has three children).

Meanwhile, Janusz is hailed as the national hero for capturing ‘Vampire’. His celebrity status bestows him a new home, color TV, etc. Previously, Janusz, his wife and little son lived in an old apartment close to railway tracks which made the building shake whenever a train passes. Despite the rise in status, Janusz intuition says that Kalicks isn’t the serial-killer. His friend & colleague say they have got the man since the murders have totally stopped. Janusz only has circumstantial evidence and unreliable testimonies. Moreover, he couldn’t get a signed confession from Kalicka. The doubt that he hasn’t got the right man and the ensuing fear & guilt to face the consequences pushes Janusz into the dark side. He initiates an affair with a young hair-dresser. It naturally leads to strained relationship with his family. The members of the detective team are too divided in their opinion about Kalicka. Janusz will lose too much if he let the suspect off, but it would affects his conscience to send this seemingly innocent man to death. What follows is a distressing mental transformation, where Janusz is masterfully manipulated as well as metamorphose into a master manipulator. 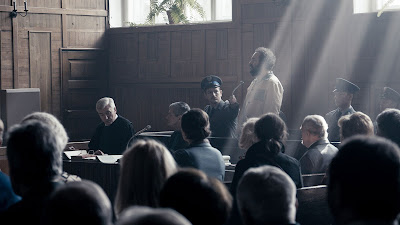 I’m a Killer starts off as the tale of serial-killer hunting, in the vein of Memories of Murder or Zodiac. There’s narrative thread dealing with police inefficiency in approaching serial murders and about the fog of lies that surrounded then Polish political situation. Movies like Citizen X and Memories of Murder similarly used serial-murders to explore the totalitarian societies’ loss of basic human dignity and empathy. But I’m a Killer soon distances itself from these specific notions of ineffective politicized hierarchy to depict an indelible portrait of a individual whose dilemmas could be seen as much from existential context than the historical context. However, director Maciej Pieprzyca states in an interview that the film seen from political viewpoint would highly resonate with Polish audience, since the country has again started to move towards the same totalitarianism dealt in the narrative. In fact, the protagonist's moral anxiety caused by morbid politics is compared to the early works of Kieslowski, Zanussi, and Agnieszka Holland.

Director Pieprzyca previous acclaimed feature Life Feels Good (2013) was an unsentimental yet uplifting tribute to human spirit. It revolved around an intelligent young man suffering from cerebral palsy. Life Feels Good enamored critics and movie-lovers, winning multiple-awards at Montreal and Gdynia Film Festival. It was second-feature film for Piperzyca who has praised for displaying artistic maturity so as to gracefully steer away from the pitfalls of sentimental melodrama. In his third feature, director Pieprzyca takes an entirely different path to exhibit the grim price one pays for upholding false sense of fulfillment and security. Furthermore, it is good that the director makes the protagonist Janusz a complex and ambiguous man. Janusz Janiski definitely surrenders himself to web of lies, but he doesn’t become a monster. There’s some remorse left in him and it was elegantly expressed in the final scene (with the glassy eyes of face cast staring back at him).  Mr. Pieprzyca’s creation of multilateral characters doesn’t just rest with Janusz. Even the secondary characters like Lidia – the crude wife of alleged vampire killer -- and Janusz’ friend Marek (Piotr Zulawski) isn’t trapped under one-dimensional writing. Renowned Polish actress Agata Kulesza brilliantly plays Lidia, conveying her own helplessness and hatred for husband in equal measures. Haniszewski adeptly portrays the transformation from hero to anti-hero. He effectively chronicles what it means for a remorseful person to trade morality & dignity for better social position. Arkadiusz Jakubik who played the father role in ‘Life Feels Good’ here dons the role of Kalicki. His poignant performance adds fuel to the perturbing morality play.

I’m a Killer (117 minutes) starts off as a crime thriller and ends up being a stirring drama, addressing the timeless themes of morality and justice.

at August 14, 2017
Email ThisBlogThis!Share to TwitterShare to FacebookShare to Pinterest
Labels: 2016 Movies, Based on True Story, Polish Cinema, Thriller