Something Wild [1986] – A Mildly Subversive and Unpredictable Road Movie 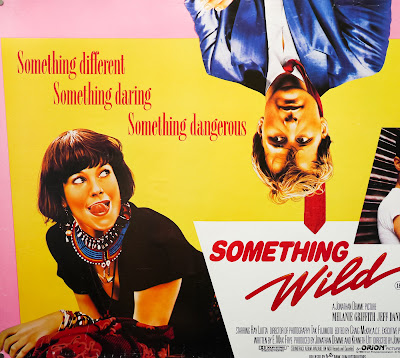 The American independent road movies of the 1980s witnessed a paradigm shift when compared to similar films made in the late 1960s & 70s. The rebels who broke away from the cultural inhibitions were now perceived as eccentric persons, waiting to reintegrate themselves back into the family unit. Gone are the days of puzzling men hitting the road with their iconoclastic bikes, in search of the so-called freedom in a conformist society. Nevertheless, the interesting element in the 80s American road movies is the balanced portrayal of women (contrary to earlier era road movies that solely focused on men). Nastassja Kinski in Wim Wenders’ Paris, Texas (1984), Julie Hagerty in Albert Brooks’ Lost In America (1985) were much more complex female characters. They didn’t fit into boorish category of ‘wild’ or ‘tamed’ women. Jonathan Demme’s unpredictable screwball comedy -- written by Max Frye -- Something Wild (1986) furthered this complex depiction of women in road films. The film’s Audrey ‘Lulu’ Hankel (mesmerizingly performed by Melanie Griffith) engages in subversive behavior in a society where the cultural status quo has been reinstated. Rebels are now comprehended as looneys; the hippies are replaced with yuppies (young urban professional). The dream to be a rebel stays alive in the movie’s characters. When the wheels are set in motion and this particular dream is achieved, there’s only threatening consequences and no sense of gratification.

Jonathan Demme’s overlooked gem is a fascinating tale of self-reinvention. It starts off as a quirky road-trip rom-com and gradually wades into nightmarish territory, reminiscent of Scorsese’ After Hours (1985) and Lynch’s Blue Velvet (1986). The protagonist is a young business executive Charles Driggs (Jeff Daniels), who has buried his rebellious streak within. Soon, he is going to be the corporate company’s VP. A trickle of rebellious attitude escapes now and then, provoking Charles to skip out on the check at a restaurant. As Charles silently sneaks out of the restaurant without paying, he is confronted by a woman on the street. The woman calls herself Lulu whose bob haircut, eye-catching exotic jewellery perfectly contrasts Charles’ conservative grey suit. Lulu’s appearance was modeled after the appearance of silent-era actress Louise Brooks – best known for her iconic role in Pabst’ Diary of a Lost Girl (1929). When we first see Lulu she is reading a book on Frida Kahlo, an enigmatic and extraordinary artist. What connects the fiercely independent, sexually charged woman and the buttoned-up executive is the urge to revel in debauchery. Lulu was just looking for a naïve man to kidnap and take him on a rampant road trip. 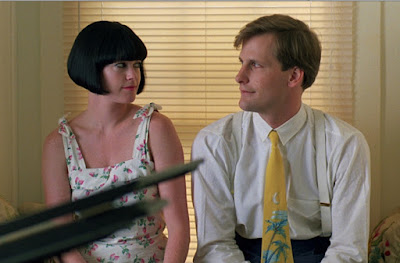 Lulu’s intentions for the journey aren’t explained much and its intriguing how Charles easily gives into her impulsion. He shows her the picture of his happy family (wife, son and daughter) in the wallet and moreover confides that there’s important work to be finished in the afternoon, before the upcoming weekend. Yet, when Lulu stops at a motel after ripping off at a liquor store, intoxicated Charles follows her to bed. Speaking in hushed tones, Lulu literally gets on top of Charles, ramping up the wildness. Charles finds more pleasure in this adventure. He is also careful to not get caught and there’s a simple reason for the yuppie to break away from the traditional life. But what’s the story behind Lulu, the hedonist? We get the details of her story, but we don’t figure out what’s in it for Lulu to take this trip. The trip runs from Manhattan to Pennsylvania, where Lulu sheds off her black wig & jewelries (to reveal golden blonde hair), discloses her real name (Audrey Hankel), and transforms into a small-town girl in order to visit her old-fashioned mother.  By the time, the darkly fierce Ray Sinclair (Ray Liotta) joins Lulu, everything turns into a nightmare. The intensified Capra-esque style wildly shifts to the territory of Coen Brothers or Lynch. Furthermore, we aren’t sure about who is playing who. 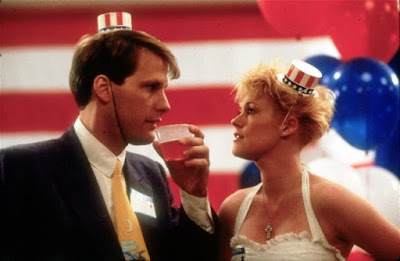 Something Wild would certainly divide viewers (especially it’s erratic tonal shifts). The script written by then-recent NYU graduate Max Frye blurs genre boundaries as it traverses down the same ‘road’ in both directions. Frye’s intricate writing includes ironical road signs, puzzling locales, and genial multicultural individuals whose presence transcends the visual dryness of typical road-movie rom-com. Demme and Frye perfectly worked together to create the sense of place through its people. There’s ample space provided to document the thriving life around Charles & Lulu’s journey. Case in point, the film’s opening scene, which doesn’t establish the characters, but only the atmospherics. Even though the environment doesn’t have a huge hold over the narrative dynamics, there’s something fascinating about it. Acclaimed cinematographer Tak Fujimoto amplifies the stylistics while capturing the ever-changing dynamics of the American cityscapes. But, for the most part the cinematography isn’t intrusive as it allows the actors to do all the heavy-lifting.

The writing or direction doesn’t entirely reinvent romantic formulas, but we don’t often see rom-com’s diffused with juicy subtext of class antagonism – between Charlie and Ray. Resting beneath the layers of antagonism is their vulnerabilities which is revealed in the third act. However, Lulu isn’t just depicted as an object in the middle of this antagonism, waiting to be claimed by the winning side. She is too proud and independent to fall for simple romantic notions. I particularly liked how the journey doesn’t lead to any big changes. The character doesn’t entirely break away from their respective pasts. Yet, the possibility for the self to evolve and further redeem oneself is kept alive. “What are you gonna do now you've seen how the other half lives? The other half of you” asks Audrey to Charles. Dreams are limitless, laced with our fantasies. When dream comes true there’s clear picture of its limitations. Self-reinvention commences after learning these limitations and maturing alongside the pursuit of dreams. By the very end, Charles’ individual boundaries isn't just extended, but entirely transformed. What does this transformation or personal reinvention mean for his life and relationship with Lulu? That’s sensibly left for us to decide. Director Demme scores huge points for casting the right actors for the three central roles. Ray Sinclair was Ray Liotta’s first major role. His specialization of playing charming sociopaths started with this film.

Something Wild (113 minutes) is a must-watch genre defying exercise in director Jonathan Demme’s oeuvre, whose film-making approach refused to be pigeon-holed by particular style or theme. It’s starts off as a smart, seductive comedy and wildly veers off to unexpected cinematic territories (which perfectly worked for me).

at August 21, 2017
Email ThisBlogThis!Share to TwitterShare to FacebookShare to Pinterest
Labels: Road Movie