The Balkan Spy [1984] – A Tragicomedy on the Politics of Paranoia 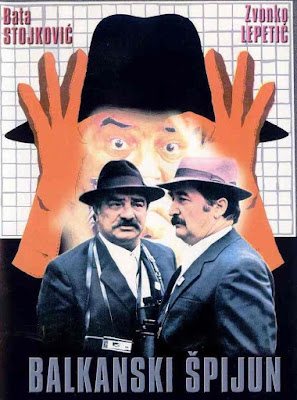 “Everyone thought of themselves as a victim, never a willing accomplice”, goes a line in Svetlana Alexievich’s spellbinding non-fiction “Second-Hand Time” (chronicles generations of people’s joyous and tragic experiences before and after the disintegration of Soviet Russia). Yugoslavia citizen Ilija Cvorovic, a middle-aged family man with heart disease, and a rehabilitated Stalinist in Dusan Kovacevic & Bozidar Nikolic’s The Balkan Spy (Balkanski spijun,1984) has the similar, aforementioned line of thought about his current predicament. At the start of the film, Ilija (Danila Stojkovic) restlessly sits in the secret police headquarters. He returns home in agitated manner and hysterically explains to his wife Danica about the secret police questioning. They have asked him about his tenant Petar (Boro Todorovic), who has returned home from Paris (to open a tailor shop) and has a son in New York. Ilija has spent two years in jail in his youth (for political reasons during Stalinist era). He doesn’t want to be victimized once again for the mistake of others or for some careless comments. Although the police have forgotten about the inquiry, paranoid deeply takes root in Ilija’s mind. For days, Ilija follows Petar and concludes every little gesture made by the tailor as a preparation to stage a terrorist act. Petar’s Paris and New York connections strongly convince Ilija that he is on the verge of unmasking a great conspiracy. He staunchly beliefs on his victim status and in his maddening perception so as to hurt people, and readily become an accomplice to the state’s oppression.

Dusan Kovicevic is a celebrated Serbian playwright and scenarist, who wrote the script (based on his own play) for three good satirical Yugoslav films in the 1980s (Yugoslavia was the federation of six republics – including Serbia – which broke up in 1991 after the bloody inter-ethnic wars) – Who’s Singing Over There? (1980), The Marathon Family (1982), and The Balkan Spy (1984). Of the three biting satires, Mr. Kovicevic took over the directorial rein in Balkan Spy, sharing it with talented Serbian cinematographer Bozidar Nikolic (Kovicevic has directed only one other film – a brilliant dramedy titled The Professional (2003)). Perhaps, Kovicevic is best known for his involvement (wrote the story) in Emir Kusturica’s Palme d’Or award winning Underground (1995). In The Balkan Spy, Mr. Kovicevic uniquely approaches the dangerous plus lasting legacy of Stalinism. Ilija Cvorovic is the embodiment of paranoia of the past, which perceived enemies in every nook and corner of the society and even inside family. 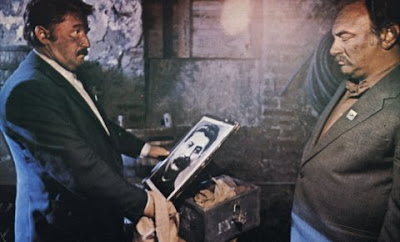 Kovicevic draws in viewers through hilarious showcase of this paranoia, only to later agitate us with the profound, real-time dangers surrounding such circumstances. In one scene, Petar and his well-dressed friends stand near the shore of a river, pointing in different directions. Ilija watches them from a distance with a city map. He draws arrows on the map based on the direction of their pointed fingers and interprets it as the plan of action. These manic paranoid deciphering has not just been the part of Stalinist era; it followed throughout the Cold War, continued with America’s war on terror, Putin's reemergence, and will persist in the future too. On a basic level, this paranoia could be seen as a commentary on dissident people’s attitude over anything ‘foreign’. Ilija and his fraternal twin Djura’s uncompromising and ludicrous Stalinist overview on Petar the ‘Spy’ progresses from simple comedy of errors (marked with absurdism and irony) to tragedy, laced with bloody violence. Viewers expecting out and out comedy would be taken aback by the sudden change of tone, which starts to leave a bitter aftertaste. Similar to Czech New Wave films, Kovicevic mocks the nature of militarism and unbridled patriotism in the first-half and then deviates from comical tone to instill a scalding social commentary. The film doesn’t often take a very subtle approach (lacks the extraordinary & singular film-form of Czech movies), but remains effective to the end, especially in showcasing emotional degradation of a man with multiple delusions. 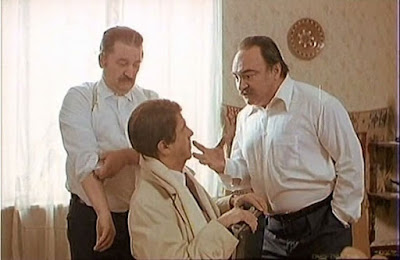 Directors Kovicevic and Nikolic perfectly realize the atmosphere that constitutes to Ilija’s manic paranoia. From the clanging typewriters in the bureaucratic office to the music in the crematorium (situated opposite Ilija’s house), every small element creates unrest within Ilija’s mind. The physical injury he sustains is often related with his burgeoning emotional agitation. The placement of red light in the living room (the stores only ration red lights to households) could be associated with Ilija’s sparkly rise of Stalinist sympathies. Ilija and Djura go to the basement to unearth their ‘rotten’ ideology, kept inside a box, holding couple of guns and portrait of Stalin. Through this depiction of physical actions and little changes in atmosphere, the directors evoke a fine picture of Ilija’s inner turmoil. Moreover, the very best of the visuals are drawn out in the taut, open ending. The haunting final image of Ilija ‘on all fours’ (accompanied by a dog) clearly invokes Kovicevic’s message: a man without rational thinking is akin to a four-legged creature. Danila Stojkovic’s effusive and frantic performance is another potent factor for the film (Stojkovic acted in the other two great satires scripted by Kovicevic). He skillfully extracts laughs as well as terror (particularly in the climax interrogation) from his character’s tormented existence.

The Balkan Spy (95 minutes) is a part-hilarious and part-disturbing social commentary on the absurdities provoked within an individual by a repressive system. Although the film doesn’t profoundly reflect on the communist apparatus like Czech New Wave or (the recent) Romanian New Wave, it whips up few thought-provoking questions.