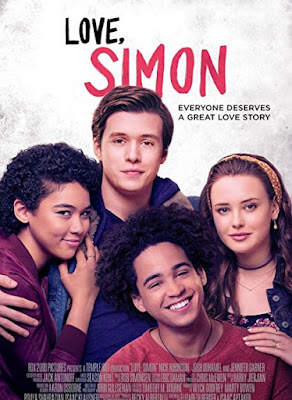 Greg Berlanti’s Love, Simon (2018) has all the familiar, if not pesky, traits of the American mainstream coming-of-age film: a white ‘normal’ teenager from a typical super-rich suburban neighborhood; his liberal & lovely but awkward parents: a diverse range of friends, one of whom is an ‘talented’ introvert who spouts ‘deep’ wisdom; few quirky teens affixed here and there for comic effects; the sneering & easily detestable bullies; and of course, the superficially exciting montage sequences that opens and closes the film, accompanied by a ubercool soundtrack, to make us enthralled and submit to the gleaming beauty of the ‘American Dream’. Sometimes I do get so annoyed at watching these ‘crushing problems’ of the wealthy neighborhood teen that I wanna shout at them: ‘Godammit! Get out of your beautified bubble and find a little perspective’. But of course there are many good American flicks on adolescence that better explores the existential quandaries of the age-group, without making us to withhold the wicked thought of slapping around the on-screen characters. Love, Simon falls somewhere in the middle. Its framework dutifully possesses the sappy mainstream stuff, yet it has one pivotal narrative element that kind of works to its favor.

Based on Becky Albertali’s YA novel ‘Simon vs the Homo Sapiens Agenda’, the story revolves around Simon Spier (Nick Robinson), who takes pains to establish that he is a ‘normal’ guy (“My name is Simon, and I’m just like you…” – although these words take different meaning a little later in the narrative). He has unbelievably gorgeous and understandably awkward parents (played by Jennifer Garner and Josh Duhamel), an eccentric cookery-obsessed younger sister (Talitha Bateman), a close-set of friends who daily carpool their way to high-school together analyzing dreams, drinking way too much iced coffee, and gorging on carbs. Despite this onslaught of 'normalcy', we could understand our protagonist's desire to hold onto his lovingly crafted limited world; to preserve the golden moments of budding youth even though life never fails to swiftly dismantle it. And, Simon truly feels that the life he experiences might change if his ‘big’ secret comes out to light: that he is gay. 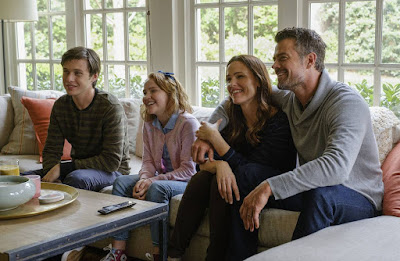 As I mentioned earlier, there’s something too syrupy and bland about this movie. But there’s also something undeniably powerful in learning that Love, Simon is the first major studio production (Fox2000 & released by 20th Century Fox) to grapple with gay teen romance. If American studios are producing shallow coming-of-age by dozens in a year, why not make a single charming, well-intentioned yet mediocre movie on a gay teen protagonist? This off-screen achievement that made possible for Love, Simon to release in thousands of theaters within US soil somehow marks it as a special moment in cinematic history. Like the highest grossing gay-themed romantic drama Brokeback Mountain (2005), Love Simon is seen as the step in the right direction, taken from a behemoth film-industry towards true inclusion and representation (although ‘Simon’ doesn’t possess the brilliance of Ang Lee’s masterwork). Naturally, the film has also faced heavy criticisms, especially from Queer pundits, questioning the cliched romantic permutations. Nevertheless, despite succumbing to the pitfalls of coming-of-age narrative the dramatization of Simon’s struggle and confusion is ultimately moving. It’s upbeat and life-affirming ‘coming-out’ story-line has a slight edge over the banal ‘coming-of-age’ narrative elements.

Simon’s universe isn’t largely homophobic. His father cracks few awkward jokes about homosexuality, and there is couple of bullies at school who teases another openly gay boy Ethan (the incredible Clark Moore). But the community on the whole is tolerant and liberal-minded. Simon knows that his happily-married parents would understand him. He’s also sure about the support of his photogenic best pals – Leah (Katherine Langford), Nick (Jorge Lendeborg Jr.), and Abby (Alexandra Shipp). But he doesn’t want to risk things now, especially when college is just around the corner. Simon even daydreams about dancing to a fantastical rainbow-colored musical at the university. At the same time, he also takes few tentative steps to shred his closeted status. When an anonymous classmate declares himself gay on a gossiping school blog, Simon (after hiding his identity) starts exchanging e-mails with him. The anonymous e-mailer writes under the pseudonym ‘Blue’, whereas Simon assumes the name ‘Jacques’. The mail exchanges offer Simon to confess his inner feelings which he couldn’t convey to his straight friends and family members. Unfortunately, a troublesome classmate Martin (Logan Miller) finds out Simon’s correspondence with ‘Blue’ and threatens to reveal it unless Simon sets him up with Abby. Martin’s blackmailing complicates Simon’s newfound love for the unseen ‘Blue’ and further makes him to invade the lives of his closest friends. 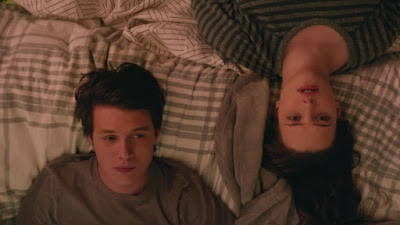 Few critics have called Love, Simon as the Disney version of the recent Oscar-nominated ‘Call Me By Your Name’. Yes, there are quite a few clunkier aspects in Greg Berlanti’s direction (an openly gay man who has already made a wonderful dramedy about a group of gay pals titled‘The Broken Hearts Club’) and Isaac Aptaker & Elizabeth Berger’s script which feels more like trying to assimilate ‘gayness’ into the ‘straight’ culture. Still, the effort taken by a studio feature to project a gay protagonist and that too in a positive and emboldening manner gives a lot of hope about near-future mainstream projects. Simon does come off as a guy with zero personality, whose defining trait in the whole narrative is that he is a closeted gay. In fact, none of the characters are what we could call well-developed. The dynamics between the friends are no way interesting like the superlative teen dramas of John Hughes. But the performers playing these underwritten or vacuous characters are irresistibly charming. Nick Robinson is at his best when he conveys Simon’s loneliness & alienation despite being at a supportive environment. Simon’s longing to make the transition smooth by coming out on his own terms are well invested with real depthful emotions by Robinson. The actors mostly make the cliched scenes watchable; Garner and Duhamel bring something genuine into their blandly written scenes with vexed Simon. Besides director Berlanti infuses certain good crowd-pleasing moments, for eg, the teacher standing up against the bullies or the fairy-tale ending with two guys on a date atop the Ferris wheel. Altogether, ‘Love, Simon’ (110 minutes) won’t find itself in a nifty position within the queer movie classics list, but an engaging and heartwarming movie nonetheless.

fandango - It's just a sweet coming of age story about a guy who happens to be gay. How refreshing to like all (or almost all) of the characters. No violence, gore, or really horrible people. Sure, it's an idealized version of reality, but sometimes we need a movie to escape into, as well as learn from. I would rate this 8.5 because there are a few moments that come off as less than perfect... but I rounded it up to a 9 because they took a huge risk: not about making a "gay" movie, but about making a positive, sweet, idealized one.
See more:
deadpool full movie
all the money in the world movies123
deadpool 2 full movie watch online
watch super troopers 2 online free
death wish putlockers
sicario putlocker