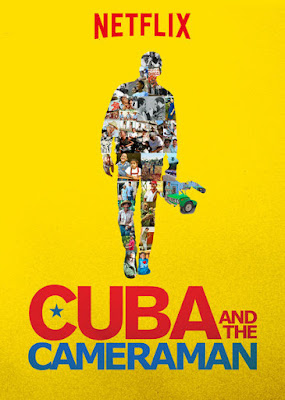 American freelance journalist and documentarian Jon Alpert have for over the four decades reported and gathered stories from places like Iran, Afghanistan, Egypt, Vietnam, Cambodia, China, etc. He has made documentaries for broadcasting networks like HBO, NBC, and PBS. Jon's latest documentary venture is an amalgamation of  his 40 plus years visits to Cuba, capturing the island nation’s cultural allure, grand socialist dreams as well as the harsh realities. Employing cinema verite style of film-making, Jon Alpert’s Cuba and the Cameraman (2017) distills thousand hours of footage into an enthralling 2 hour documentary, which includes Jon’s semi-regular access to Fidel Castro himself.

The film opens on the occasion of Fidel Castro’s death (November 25, 2016), hailed as a great socialist leader in some quarters and censured as an autocrat by others. Although Jon Alpert covers the big events surrounding Cuba from the early 1970s to the recent times – Castro’s visit to United States, the Mariel Bay boat-lift, post-Soviet Union economic crisis, etc – the documentary’s primary focus lies upon three working-class families, who are visited once in six or seven years, over Jon’s 45 years of Cuban visits. Each of the visits subtly convey a lot about the country’s progress (or lack thereof) and provides a much grounded perspective of the so-called Cuban socialism. The approach pretty much reminds us of Michael Apted’s landmark 'Up Series' (which followed the lives of fourteen British children since 1964 when they were seven years old; the last part was 56 Up, released in 2012). 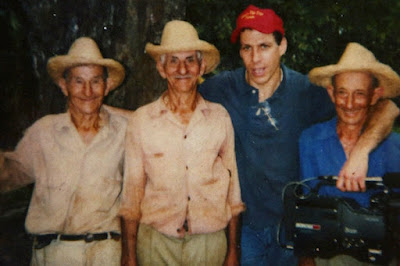 Jon Alpert was one of the few American journalists to get closer to the complicated socialist leader of Cuba. In the 1970s, he and his crew, including his wife and film-making partner Keiko Tsuno, took all the state-of-the-art video equipment to Cuba. And, it was all so heavy that they carried it around Havana in a baby carriage. This is said to have first caught Fidel Castro’s eye, which allowed Jon to gain his first interview with the socialist leader. Using his natural charm and persistence, Jon eventually wins over the leader and happens to be the only American journalist to closely cover Castro’s 1979 visit to US (for a speech at U.N.). It is initially made clear that Jon Alpert, like many of us, is drawn by the ideals of Cuban revolution and Castro’s obscure charm. But soon that first, surface impression gives way to a more clear-eyed look as Jon begins to acquaint himself with the working-class families, whose struggles and tenacity mirrors the regime’s failures and yet the country’s undying spirit. What starts off as a mere romanticized view of Cuba paves way to an intimate observation of stagnant lives, filtered through constantly evolving cameras. 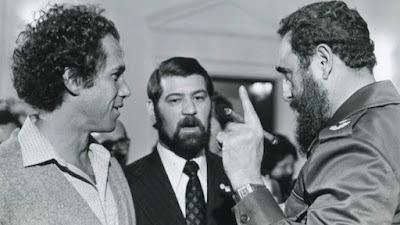 Cuba and the Cameraman could be frustratingly apolitical at times. Jon shows the island nation’s period of heightened political tensions, shortages and blackouts, yet it’s very short on political commentary. Like many of the Cubans, who swear fealty to the strict regime, while also continuously facing the heavy toll of the socialist policies, Jon Alpert partly adores the Cuban leader and partly mourns for the proletarians’ agonies. Some may find the documentarian’s apolitical stance as immoral and confusing. Jon does show us the unguarded Castro in few moments, who is otherwise very mindful of projecting his strongman image (always dressed in uniform and not seen without the famous Cuban cigar). However, the genuine personal connection between Fidel and Jon keeps the harder questions out of the conversation. At its best, Cuba and the Cameraman is a wonderful personal visual diary, riddled with spectacular emotional moments.

What makes the documentary a must-watch is the chronicle of Jon’s long friendship with salt-of-the-earth Borregos’ family. The three farmer brothers (Cristobal, Gregorio, and Angel) Borregos farm always welcome the journalist with a beaming smile and a bottle of rum to mark the occasion. Jon first meets the brothers when they are in their 60s. They happily work on the fields, raise livestock, and always win over Jon in arm-wrestling matches. The encounters consistently happen for more than 30 years, and in the intervening years the old peasant brothers face numerous troubles. This depicts the real consequences of U.S.-led blockade and the fall of the Socialist bloc in 1990s. Moreover, the country's free yet gravely under-funded, under-equipped healthcare system is scrutinized much closely. Jon also follows two families in Havana city: Luis, from his days as young working man to political prisoner to his eventual turn as pioneering businessman; and the family of Caridad, a bright schoolgirl who once dreamt of being a nurse but gets married at tender age of 14 and the tough times eventually pushes her towards American shores. Alongside the visual document of these families’ plight, the camera also tours around the broken, unchanging corners of Havana. 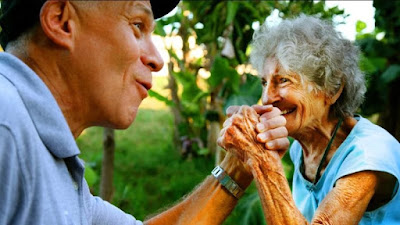 Jon Alpert largely considers his travels as a means of ‘making friends’. Considering the fraught US-Cuba relations in the past decades, his achievement couldn’t be easily dismissed just because of the lack of staunch political stance. The ground-level portrait of the people and the country, enlaced with relentless curiosity and exuberance, mostly resist our urge to complain. Most particularly, Cristobal and his brothers’ perseverance and their smile bestow an everlasting impact on us. The brothers’ ability to find beauty and happiness in the simplest things makes up for the documentary’s vibrant heart. And, whenever they are swamped with problems and after hearing their news of demise, genuine tears wells-up our eyes, much more than Cuban mourners filling the streets after Castro’s death, chanting, “Yo soy Fidel!” That in itself -- the ability to look beyond Castro’s long shadow cast over Cuba -- is a great triumph of ‘Cuba and the Cameraman’.