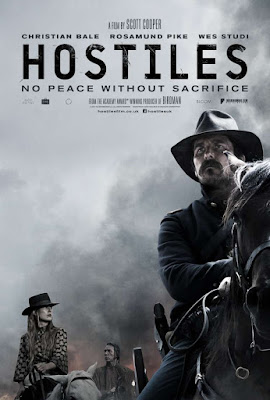 No other genre better illuminates the myth surrounding the ‘Great American Hero’ like Western genre. The original image of the Wild West with its romanticized creation of cowboys represented the ideal of American white man’s individualist freedom. Before the dominance of American superheroes in mainstream entertainment, it was the image of strong, silent frontiersmen & cowboys which gained serious international popularity. Buried beneath this alleged hero’s charming surface lay the monstrous notions: the denial of Native American mass killings, justifications cooked-up to encroach their lands, etc. In a way, the old Western heroes remain unruffled or overtly support segregation, racism, and social ostracism. Of course, this fascinating genre kept reinventing itself like its nation. The old masters of cinema John Ford, Howard Hawks, Anthony Mann, etc made magnificent Western cinema, although it was accused of lacking ambiguity and moral complexity. That changed with the entry of fiercely independent film-makers like Sam Peckinpah, Sergio Leone, Samuel Fuller, Robert Altman, and Arthur Penn. The genre continued to ruminate on the characteristics of ‘Great American hero’ in which his ‘greatness’ was scrutinized and ridiculed endlessly. After the 1990s, directors Clint Eastwood, the Coen brothers, Quentin Tarantino, and many other independent film-makers kept on redefining the heroes, villains, and their brutish life in Wild West (Movies like ‘Assassination of Jesse James’, and ‘Meek’s Cutoff ' were the kind of eerie, existential Westerns that reminds us of the works of Monte Hellman and Budd Boetticher). Scott Cooper’s Hostiles (2017) might well be a fresh, interesting addition to this ever-changing, glorious genre. It mostly avoids the age-old tropes of barbaric Natives and noble white saviors and rather focuses on the endless brutalities carried out to carve out the American frontier.

‘Hostiles’ is Scott Cooper’s fourth feature film and so far his best. Here he comes a lot closer to achieve the excellence, which he failed to do so with his watchable slow-burn dramas: Crazy Heart, Out of the Furnace, and Black Mass. Hostiles does contain the dull character dynamics and feels drawn out like Cooper’s other movies. Yet it’s take on the themes of racism, hatred, and violence from a morally interesting position strongly resonates with truth. Writer/director Cooper sets the bleak tone by opening the film with D.H. Lawrence’s quote: “The essential American soul is hard, isolate, stoic, and a killer. It has never yet melted.” The film is set in the year 1892, in American Southwest. The peace enjoyed by the frontier family of five (mom, dad, two little daughters, and an infant boy) is invaded by the arrival of Commanche raiding party. The tribesmen have come for the horses, but without any remorse they shoot-down the husband and the three children. The shell-shocked wife named Rosalie Quaid (Rosamund Pike) barely survives from the riders. 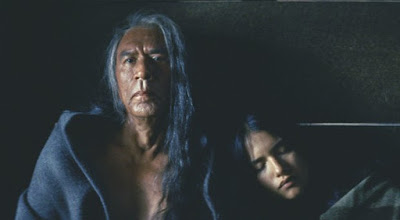 The derogatory term ‘hostiles’ was used to dehumanize the independent Natives. And, this opening scene involving renegade group of Commanche seems to very well justify the use of the term. But very soon, we see the ‘hostiles’ at the other end. A group of US cavalry soldiers, led by sullen-faced Capt. Joseph Blocker (Christian Bale), taunts and belittles a captured Native American family, which has tried to escape from the harsh reservation premise. Captain Joe Blocker is revealed to be a hardened military veteran, who has spent his long career massacring and fighting Native Americans. He has dispassionately learned all the things he wanted to know about his enemy. He oversees the Natives’ torture and believes it’s the only way to treat them. The next day the Captain’s superior (Stephen Lang) calls him and commands to lead a convoy from Arizona to Montana to safely escort Cheyenne Chief Yellow Hawk (Wes Studi) and his family. The cancer-ridden Chief was confined to a little cell for years, and now wishes to peacefully die back in his family’s sacred lands in Montana. 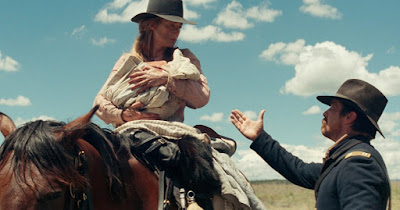 Not surprisingly, Joe Blocker resists the assignment and even vehemently questions his superior’s decision to set the Chief free. It is revealed that Chief Yellow Hawk is responsible for the deaths of several of Joe’s friends and a sworn enemy at the war. The superior threatens to hold over Joe’s pension. Eventually the Captain puts together a convoy, consisting of his traumatized second-in-command, Metz (Rory Cochrane), and three inexperienced soldiers: Kidder (Jesse Plemons), Woodsen (Jonathan Majors), and Private DeJardin (Timothée Chalamet). Accompanying the Chief are: son Black Hawk (Adam Beach), daughter, Black Hawk’s wife (Q’orianka Kilcher), and their child. As one could expect, the convoy come across Rosalie Quaid and her slaughtered family. She’s initially revolted by the sight of Chief and his family. But after contemplating suicide, she eventually joins the troupe and becomes a force of humanity. Most importantly, Joe Blocker’s journey with Yellow Hawk encourages him to see past all the historical brutalities and recognize the need for common ground. Joe’s transformation isn’t spelled out in sentimental, clear-cut terms, but the slow passage of space and time brings about calmness within him. Of course, we know where the narrative is going and at times we perfectly foresee its dark turns. However, a handful of touching scenes, nuanced performances, and gorgeous visuals keep us emotionally invested in this protracted narrative.

Scott Cooper’s screenplay was based on an original manuscript by late screenwriter Donald E. Stewart. He has penned the Oscar winning script for Costa-Garvas’ Missing (1982), and adapted three Tom Clancy novels. The basic idea for the film was found in Mr. Stewart’s unfinished manuscript. It’s a very sentimental idea, which Cooper tries to transcend through his morally ambiguous characters. Although it’s a film that calls for empathy and peace among different races, it also vividly focuses on the dehumanizing nature of violence. The violent acts are sudden, shocking, and denies cathartic emotions (may be except for the final shoot-out). Director Cooper nearly succeeds in the way he weaves path of redemption or enlightenment for Joe Blocker without overtly offending our sensibilities. Nevertheless, the narrative would have felt well-rounded if due focus was given to the development of its Native characters. Wes Studi, with his piercing eyes expressing buried anguish, ably carries his underwritten character, but the other Native characters have far less headroom to develop their roles. Due consideration was given to showcase the indomitable spirit and humanity of Rosamund Pike’s character (Mrs. Quaid). The Cheyenne family could also have used that kind of portrayal. In the end, the Native characters are pushed to the periphery and the trauma of white male occupies the center. It’s somewhat disappointing and undercuts its impact, considering how long stretches of the movie lingered on the two racially divided groups’ shared humanity.

Christian Bale is perfectly cast as the grizzled Captain. He plays the character with quiet intensity and uses minimal gestures to channel through the man’s deep prejudice. Ben Foster is an effective addition to the mix, who plays a former compatriot of the Captain. Foster character’s deep-rooted bigotry is used to gracefully exhibit the humanity still prevailing within Captain Joe. The astounding location cinematography by Masanobu Takayanagi beautifully sweeps across the arid and lush landscapes, injecting solace and tranquility to the otherwise brutal episodes.

Hostiles (133 minutes) is definitely a well-intentioned, politically conscious Western narrative blessed with soul-stirring performances. Film-maker Scott Cooper’s attempt to discharge the Western genre’s atrocious generalizations and falsely idealized past is highly commendable, even though its final portions are slightly unsatisfying and troubling.