The Nile Hilton Incident [2017] – An Intriguing and Moody Neo-Noir 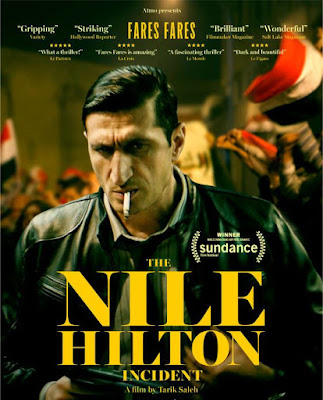 A dingy urban landscape mired in systemic police corruption, venal political set-up, and powerful corporate elites makes up for the right set-up for a typical gumshoe yarn. Furthermore, include a weary, conscience-stricken police officer, a femme fatale with a sultry voice, and a brutal murder, you might just be remembering those glorious monochromatic noir films of the 1940s. But Swedish director Tarik Saleh in The Nile Hilton Incident (2017) takes all these familiar elements and sets it in modern Egypt (in 2011) as its frustrated citizens are gearing up for a historic uprising. Swedish-Lebanese actor Fares Fares (played ‘Assad’ character in the adaptation of Jussi Adler-Olsen ‘Department Q’ novels) plays the brooding, doomed, chain-smoking central character, wading through the atmosphere of iniquity and perfidy with scorn and suppressed wail. He makes this movie compulsively watchable, despite Saleh’s slightly messy script. Moreover, the perfectly ingrained cultural specificity enriches the noir/pot-boiler staples of the narrative.

Righteous anger crackles in Cairo in the weeks leading to the Egyptian Revolution of 2011. The President Hosni Mubarak’s crooked regime has provoked hordes of protestors to take up the streets and demand his removal. Politicians, tycoons, and police try their best to hold on to this life-line of corruption and unbridled power. In this crumbling situation, a famous pop singer Lalena is found murdered in the premises of a swanky hotel. The victim’s face is plastered around the city on billboards and normally this would be a high-profile case. But the police force remains nonchalant. The chief assigns the case to Commander Noredin Mostafa (Fares Fares), an unscrupulous detective who has risen through hierarchy through nepotism. Extracting money for him and his colleagues is more important than extraditing justice. Degenerate attitude is the only thing that trickles down from the top. 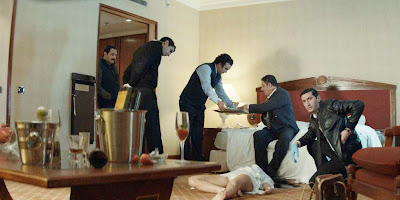 Considering the people’s collective frustration, which Noredin indifferently watches on TV, the corruption might only be worse in other contours of government institutions. After entering the crime scene, Noredin searches the dead woman’s handbag and without a second thought steals wad of cash. His uncle the Chief is delightfully eating the ordered fish, while the singer’s corpse with bashed head is lying on the carpeted floor. That just seems to be the way these things work here. The superior officers learn that a Sudanese cleaning lady named Salwa (Mari Malek) has possibly seen the killer, but they brush it off and closes the case as suicide. To investigate Lalena’s murder means suspecting some of the very powerful men in Egypt. And that wouldn’t end well for the police officers. However, Noredin stumbles onto the reason for Lalena’s killing through the roll of film, he discretely took from the crime scene. 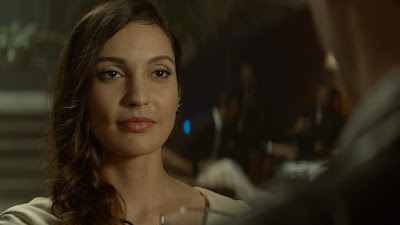 In the photos, Lalena is intimate with Hatem Shafiq (Ahmed Selim), a most prominent real-estate developer, whose face is also plastered on billboards, advertising about the upscale development projects he’s constructing. Shafiq is also pals with the President’s son. He is clearly an ‘untouchable’. Meanwhile, the illiterate and undocumented Sudanese maid goes into hiding after learning who she saw in the hotel corridor. Despite his superior's order Noredin pursues the case leads and he gradually develops a conscience. At the same time, the dead girl’s beautiful friend Gina (Hania Amar) emerges, also a singer, unearthing the detective's  feelings of romance and lust (he is grieving over his wife’s accidental death). The other members of police force warn him to consider the sensitivities attached to the case. But Noredin, affected by the climate of rebellion, wants to find the real killer.

The Tahrir Square protests and the distinctly Egyptian undertones provide the narrative with an interesting context. Saleh has remarked that he based his script after following the murder case of a Lebanese Singer (Suzanne Tamim) in Dubai. It happened in 2008 and in the ensuing investigation an officer of national Egyptian police force was arrested. Furthermore, a very famous and powerful Egyptian businessman was also involved in the murder. The case was widely covered by the Egyptian media. Saleh instead opts to set his murder story in Cairo, a few days before the Revolution. This brilliant backdrop offers Saleh to equate Noredin’s redemptive attitude with that of the incredible societal uprising. Saleh’s strikingly animated debut-feature Metropia (2009) was about an oddball protagonist, uncovering a terrifying conspiracy. I didn’t watch his second feature Tommy (2014) which was touted as a thriller with noir elements. With The Nile Hilton Incident, Saleh more successfully blends his social commentary with deft aesthetic choices. Pierre Aim’s cinematography (La Haine, Polisse) engulfs the bustling urban jungle under hazy brown smokiness. Saleh-Aim’s foray into noir stylistics, including the vividly lighted criminal underworld dens, mostly blends well with the narrative elements.

At times, the film feels too overwrought (especially after Noredin's tryst with Gina), but the heartbreaking finale packs a hefty punch. As the mystery draws to an infuriating conclusion, withdrawing from Noredin’s tiny conflict to capture the mass of uproarious citizens in movement, the bitter irony tries to decimate the last vestige of hope within us. But there’s some sort of hope in watching an individual and a society wanting to fight the putrefaction that’s considered the norm. Altogether, The Nile Hilton Incident (111 minutes) is an effective Egyptian spin on the classic film-noir style.