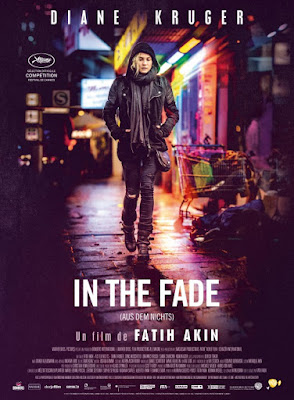 Fatih Akin, German film-maker of Turkish descent,  is best known for making devastating dramas that gleam with quiet intensity. His culturally hybrid or transnational cinema often piercingly explores the human condition within the alleged cultural boundaries. Through eclectic mix of genre templates, Akin zeroes-in on themes of migration, identity crisis, mourning, grief, love, and death. What’s interesting about Akin’s works is his ability to evoke visceral reactions or potent range of emotions by playing with viewers’ preconceptions about the rigid constructs of race and gender. Fatih Akin reached the peak of his directorial powers with intricately structured narratives in Head-On (2004) and The Edge of Heaven (2007). The director’s stab at comedy in Soul Kitchen (2009) was a welcome change. But I didn’t like The Cut (2014), a disappointing drama on Armenian Genocide, and Tschick (2016), a pretentious buddy adventure flick. However, In the Fade ('Aus dem Nichts', 2017) marks Fatih Akin’s return to ferociously compelling narrative. Although executed with precision, the film does feel a bit unconvincing. Yet Akin’s brilliant formalism combined with a bravura performance from German-American actress Diane Kruger (her first role in a German production even though she played a German character in ‘Inglorious Basterds’) makes In the Fade an engrossing revenge melodrama.

Using minimal visual choices and precise details, Akin opens the movie by conveying the love and family life of Katja (Diane Kruger) and Nuri (Numan Acar). A smartphone captures a man in a suit gleefully walking in a prison yard, accepting the cheers of his inmates. Later, he marries a blonde-haired woman with rings tattooed on their fingers. Nuri is a convicted drug dealer, but a fully reformed man after marriage. Few years later, we see the couple still madly in love and they have a smart, adorable kid as a result of that. The question of how these two individuals came together might be haunting at the back of our mind, but their love for each other (expressed through simple gestures of intimacy) seems genuine and utterly convincing. Katja takes her son Rocco (Rafael Santana) to his father’s office, in order to spend some time with her pregnant sister. Nuri is now running a tax consulting firm (in a storefront office), which specializes in aiding immigrants. From the glow in Katja and Nuri’s face, it’s clear that Rocco is physical evidence of their life’s transformation and transcendence. Katja says her goodbyes, without knowing it would be her last time seeing them. 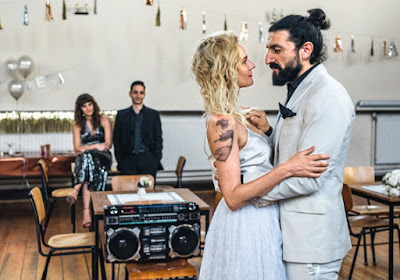 After returning from visiting her sister, Katja is shocked by the sight of police barricades near her husband’s office. The authorities say Nuri and Rocco are killed in an explosion, caused by a makeshift bomb made out of fertilizer, diesel fuel, and nails. Furthermore, she learns that their bodies are so badly damaged that they can't be identified without a DNA test. Earlier, as Katja heads out from her husband’s office, she sees a young German woman (Hannah Hilsdorf), leaving an unlocked bicycle on the street in front of the office. Katja believes that the cold-blooded murders are orchestrated by a neo-nazi group. But as if the emotional devastation of losing her family isn’t enough, the authorities insult her memory of Nuri by investigating his past links with drug-dealing immigrant mafia. The police suggest Nuri might have relapsed and renewed his underworld connection. Katja’s Kurdish in-laws vehemently place the blame on her. Her own mother thinks the worst about Nuri. Burdened by crushing grief, Katja unapologetically uses drugs (a habit which initially introduced her to Nuri), which also falls under the scrutiny of the investigators. Nevertheless, the real culprits are arrested soon: Hitler-loving neo-nazis Edda and Andre Moller (Ulrich Friedrich Brandhoff). Katja attaches herself as co-plaintiff and seeks the help of lawyer friend, Danilo (Dennis Moschitto). Will she get justice? And even if she did, will that stop her hitting rock bottom with grief? 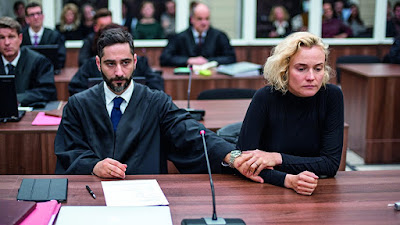 Fatih Akin delves directly into the heart of the matter, dividing his narrative into simple chapters – ‘Family’, ‘Justice’, and ‘Sea’. He elegantly moves through these varied settings with an incontestable effectiveness. Akin includes few elements of American revenge thrillers, starting from the false leads to the drawn out suspenseful sequences in the final portion. While the first two chapters firmly attunes to emotional reality of Katja, the third chapter tries to teeter away from realism and embrace melodrama or certain kitschy notions. As the film’s end text says, the narrative is based on real-life, notorious murder spree of Kurdish and Turkish businessmen by neo-Nazis in Germany in the early 2000s that went unsolved for years. For the majority portion of its running time, ‘In the Fade’ stands as an impressive (universal) study of grief, loss, love and hatred. To suddenly turn it into a narrow commentary on Germany hate crimes through the underwhelming ‘Hollywoodized’ third act, the movie falls short of being one of Akin’s career best.  The end text only seems to assuage the total emptiness we feel from the bland finish. It tries to infuse an impetus to the final act where there’s actually none.

In the Fade’s disappointing final act is all the more troubling because up to that point (until the courtroom sequences), Akin’s aesthetic flourishes and Diane Kruger’s grief-eaten facade are compulsively watchable. In one of the more memorable visual flourishes, the camera spins over Katja’s bathtub as it gradually reveals her slit wrists which turn the water into red (cinematography by Akin regular RainerKlausmann). Akin does his best to keep the courtroom scenes dynamic. He deftly shoots all the action going around the courtroom, yet keeping Katja’s emotions as the center of focus. The first chapter that entirely revolves around Katja is filled with her expression of consuming anguish. In the second chapter, she is kept at the periphery as the killers’ defense attorney, Haberbeck (Johannes Krisch) takes a cruel line of approach to water-down the nature of his clients’ racist views. Nevertheless, Akin includes crisp, effective shots to convey Katja’s simmering rage (which we share too); an approach that retains emotional power despite slow, methodical sifting of evidence. In one haunting scene, an expert witness casually describes the myriad of wounds in Rocco’s mangled body. Akin uses split focus shots in this scene which place Katja in the foreground, showcasing how the expert’s words are intensifying her inner pain. More interesting is the very final scene, when Katja emerges from a muddled, unfocused shot which clearly states her line of action. 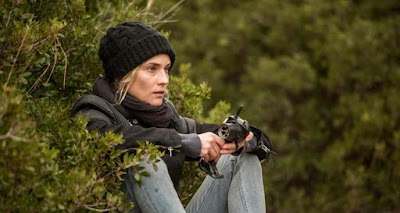 The narrative is also rife with symbolic treatment of things and simple gestures, starting from Katja wearing Nuri’s glasses, the snow-stacked unused trampoline, the samurai tattoo, Rocco’s toy car, etc. Equally good are the use of different color palettes: after saturating the initial portions with darkness, Akin moves to sanitized white in the courtroom scenes and ends it up with scenic sun-kissed shots (the shot of Kruger walking in the sunny wheat field, her hair matching the color of wheat radiates with benign beauty). Ultimately, the film belongs to Diane Kruger’s worn-out, fury-ridden face. She dutifully immerses herself into the role, whether her character faces emotionally grueling insults or silently contemplates her anguish or dives headlong into action. The mere close-ups of Kruger’s make-up-less face sharply demonstrate Katja’s psychological disintegration than any expressive dialogues (Kruger’s Katja brought her the ‘best actress’ award at last year’s Cannes Film Festival and as expected it set a precedent for her getting snubbed at the Oscars).

In the Fade (105 minutes) is a visually impressive revenge/courtroom drama that’s ultimately too muddled to deliver an efficient commentary on the normalized xenophobia within European sociopolitical structures. However, it mostly works as a meditation on grief, loss and senseless violence thanks to an emotionally wrought performance from Diane Kruger.