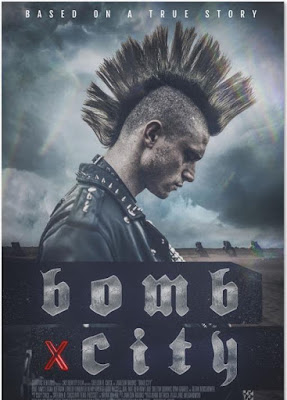 Hate and violence is diffused through every culture in the world, and so any gruesome crime committed in a fit of fury conveys few universal truths about the polarized communities. The killing of 19-year old Brian Deneke that occurred in Amarillo, Texas in 1997 deftly portrayed in Bomb City (2017) tells one such timeless and timely tale; timely, because of the current levels of social and political division in America. Tensions had long been simmering between high school football players (jocks) and punk rockers (punks), both white-skinned. Conformity is the most sought out quality in this conservative town, where the teenagers are often angry, bored, and restless. After a nice soccer game in the evening, the youngsters blow off steam by arranging beer parties and cruising the streets in daddy’s car. But the punk rockers with their Mohawk hair, heavy steel chains, and leather jackets engraved with image of skull and crossbones represent cataclysm and chaos for the church-going, upper middle-class community. Director Jameson Brooks sharply indicates this rift in the movie’s earlier portion, delineating how the narrative is much more than one youngster’s murder.

Debutant film-maker Jameson Brooks and his co-writer Sheldon Chick are Amarillo natives, whose colorful observations regarding social expectations of the town provide an array of impressive moments. Both Brooks and Chick have also humanized the characters on both sides, without making one side entirely good or bad. The title not only refers to Amarillo’s close proximity to the Pantex nuclear weapons assembly plant, but also denotes the cultural conflict that ticks like a bomb. Dave Davies plays the role of doomed protagonist Brian Deneke, a green Mohawk-haired youngster and a member of the local punk scene. He is living away from his caring, working-class parents and shacked up in a dilapidated warehouse with his friends. The place also serves as their music venue. 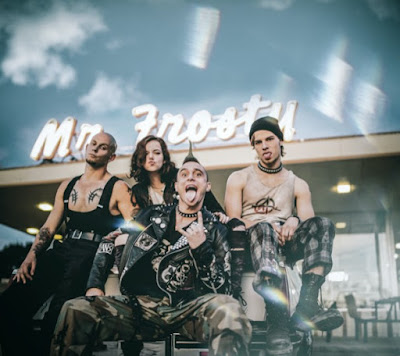 Jameson Brooks opens the movie in a riveting fashion. It’s night time in Amarillo. A gale blows through the empty neon-lit streets. The only human presence is seen in the parking lot, where two groups of teenagers are getting prepared to smash each other. Just as the fight is about to pick up, the shot is cut to the bright Amarillo courtroom, a moody buttoned-up lawyer (Glenn Morshower) holding the punk’s jacket, imprinted with words ‘Destroy everything’ (actually a reference to Deneke’s favorite band, Filth which calls for ‘destroying our preconceptions’). The lawyer laments about the message we want to bestow our children for generations to come. Soon, it becomes clear this man is not prosecuting the murderer, but rather vilifying the victim (from his choice of clothing to music) to justify the cold-blooded murder perpetrated by his client. Then the narrative moves back in time to scrutinize the build-up to inevitable violence.

Brooks largely succeeds in putting the viewers in the shoes of Brian Deneke, a member of an often maligned sub-culture. The script showcases how for Brian, punk music was a means to express his frustration and anger about life and everything. He is enthused about a teenager attending his punk music concert. He slightly frowns when the girl (Maemae Renfrow) he likes lit up a cigarette. Brooks and Chick although doesn’t depict Brian as a martyr, their sympathies clearly lie with these alleged oddballs. Early when the band plays their loud music, Brooks juxtaposes it with the ferocity found in a Friday Night game. For all their hostilities, the two groups are shown to be embracing different means available to burn their excessive testosterone. The football doesn’t go well for the home team. Cody Cates (Luke Shelton), a baby-faced junior player laments about their defeat with his bros in a snack hut. In comes Brian's friends for a coffee, and Cody to fit in among his bros, addresses Brian with a, “whats-up, faggot?” The ensuing minor verbal altercation foreshadows the bloody ones to follow.

The film depicts the irreparable crime of 17 year old jock Cody (pseudonym for real perpetrator Dustin Camp) in a hard-hitting, clear-cut manner. However, the real villains of the story are the ones who judged this shameful case in Amarillo courthouse. Defense attorney Warren Clark’s (in real-life it was Cameron Wilson) declamations would seem like exaggerated writing, but most of his hateful words were actually ripped directly from the courtroom transcript. He unashamedly exploits the jury members’ prejudices, painting the punks as violent miscreants and their opposers as pillars of the church-going community. The final light sentence of Cody Cates (Dustin Camp) that shocked the community perfectly represents the privilege and baseless biases saturated throughout every facet of the society (including the judicial system; the judge presiding Brian Deneke’s case feared reprisals, and even sealed the names of the jurors).

Brooks’ directorial technique to cut back and forth (between courtroom and past events), and doling out information in parcels, largely helps examining the dynamics within the clique and hostilities between them. There’s certainly a lack of restraint in the way the director overtly and repeatedly depicts the thematic intentions. And, at times the visual flourishes overwhelm the emotions or intimacy portrayed on-screen (for example, Brian and his girl friend Jade’s moment of intimacy in the grass fields). Despite such unsubtle or loud techniques, Brooks’ sharp characterizations allow us to fully immerse ourselves in the raging cultural battlefield. The most commendable aspect of the writing is not turning Brian’s killer into a one-dimensional bad guy. After the sad incident, the camera is placed inside Cody’s car, as the teenager’s adrenaline rush is slowly replaced with self-awareness and outright panic (Shelton is excellent in this scene). Of course, Cody’s lack of remorse eventually makes us despise him, but the film-maker refrains from judging him or presenting him as an inhuman creature.

One of the interesting inventive choices is to include Marilyn Manson’s post-Columbine speech on ‘blame and violence’ which is heard in parts in the opening and ending of the narrative (he mentioned Deneke’s death in the speech). Manson’s speech may indicate a specific moment in the late 90s in America (he forlornly questions, “Is adult entertainment killing our children? Or is killing our children entertaining adults?”). But the cliques, consisting of teenagers desperately desiring to blend-in as well as stand-out, is present in all cultures since the intolerant society continues to judge/punish individuals by their outward appearances. In this fashion, Bomb City (95 minutes) is a deft observation of male angst and also makes an impassioned statement on the perils of social conformity and ostracization.