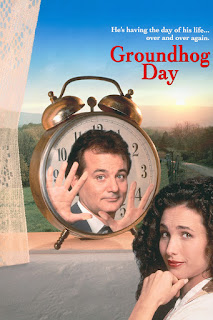 The most horrible thing about life is not knowing what's going to happen next. Or at least that's what we have thought up till now. But "Groundhog Day," brilliantly imaginative, wildly funny movie, demonstrates that there is something even more horrible -- knowing exactly what's going to happen next. It's deja vu gone mad. The premise of  Groundhog Day is essentially 'if you had to do it over again - and again - what would you do differently?.'


Plot
Analysis
Bill Murray's weatherman is tailor-made for his  screen persona. The entire movie rested on his shoulders. While all other actors had rather simple roles to repeat, his character was the only one being the aware the utter repetitiveness of his existence and thus the only one who was changing through the entire movie. It was really fine to see the different ways he reacted to the situation - anger, disbelief, despair and final acceptance - all that through the subtle gestures or one-liners.  Director Harold Ramis, has given us a spectacular product of comedy genre, with a solid and intelligent script from Danny Rubin. The other actors and their performances were, as someone should expect, shadowed by Bill Murray's role.
The humor is of a higher caliber than that found in most so-called comedies. Groundhog Day finds its humor in situations and characters.
On the surface,it might look like a silly comedy. But a closer look, reveals a beauty easily not seen. With all of the formula-driven, painfully unfunny comedies available today, it's a pleasure to uncover something as unique as Groundhog Day.
Trailer:
Groundhog Day - Imdb
at December 29, 2011
Email ThisBlogThis!Share to TwitterShare to FacebookShare to Pinterest
Labels: Existential Movies, Family Drama, Feel Good Movies, IMDb Top 250, Magical Realism

Sounds interesting...
Will have to watch it for sure. :)

Ha Ha Ha ! Its a Groundhog Day ! This movie tells us how brilliance can be achieved in a very simple and subtle manner!