Warrior : Not just another fight movie 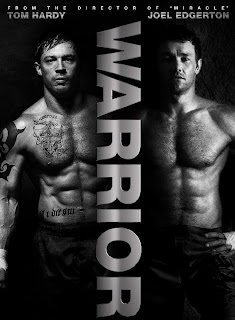 Warrior is so beautifully constructed and emotionally engaging, the tears are almost certain to fall. It is a straight genre picture, a fight movie of the old school. But it’s a mixed martial arts tale, I don't know much about Mixed Martial Arts except that it appears to be an extreme form of regulated fighting, with combatants using a variety of tactics to bring their opponent down.


Plot
Brendan (Joel Edgerton) is a dedicated educator and a devoted family man. His students adore him, and so does his wife, Tess (Jennifer Morrison). But Brendan’s roots and his future are entangled in more violent pursuits. He used to be something of a big deal on the mixed martial arts circuit. As hard as they work, Brendan and Tess have financial troubles. And one of their children requires expensive medical care.

Meanwhile Tommy (Tom Hardy), Brendan’s estranged younger brother, returns to the modest house in Pittsburgh where they grew up. Years before, Tommy and their mother fled the boys’ abusive, alcoholic father, Paddy(Nick Nolte), a wrestling coach. Tommy, a former Marine and a war hero who served in Iraq, is looking for a fight, and without forgiving his sobered-up, apologetic dad, he engages the old man’s professional services as he prepares to go into the ring.
Unknown to each other, both Tommy and Brendan are training for Sparta, a $5 million, winner-take-all tournament. Every sports movie needs a Big Game, the Sparta provides us a grand spectacle of redemption and revenge.
The Good
at December 20, 2011
Email ThisBlogThis!Share to TwitterShare to FacebookShare to Pinterest
Labels: American Indie Films, IMDb Top 250

my favorite this year :D

Haven't seen yet, thanks for reminding, will catch it up soon. :)

Superb Movie:). Could have been even better if the script wasn't predictable.