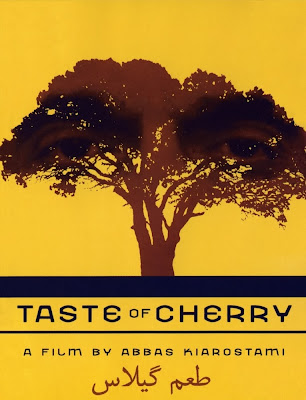 “Taste of Cherry” ("Ta'm e guilass", 1997), the story of a man who wants to commit suicide, took a long time to make and various unexpected mishaps complicated the process. Filming began in the spring of 1996, but Kiarostami harbored serious doubts about the ending and spent all that summer and part of the autumn weighing up various possibilities. At the end of the year, before he had been able to complete filming, the director had a car accident and was unable to work for several months; and, later, part of the negative was accidentally burnt during the development process. So, Kiarostami had to shoot the lost sequences all over again and bring the film to a close with one of the solutions he had been considering.

Ready to be sent to Cannes, “Taste of Cherry” then encountered various obstacles posed by the Iranian authorities. It was only after long and difficult negotiations, in which the French Foreign Minister is rumored to have intervened, that the film arrives at the last possible minute and carried off a well-deserved ‘Gold Palm.’ The most surprising features of the “Taste of Cherry” are above all its extreme minimalism and its great austerity. In this film, a man who wants to commit suicide searches single-mindedly for someone to bury his afterwards. The successive meetings between the protagonist, Badii, and various people, whom he tries to persuade to bury him in exchange for a considerable sum of money, form the backbone of the film, the structure of which is moreover extraordinarily strict and calculated. 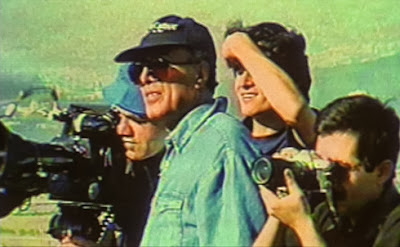 The protagonist’s three principal conversations are thus the main building blocks of the film, and are alternated with other long and significant periods of absolute silence, deliberate pauses that gives “Taste of Cherry”, its slow and serious tempo, allowing the audience to reflect on what they have just heard. A film turned in on itself, with a strong meditative dimension, “Taste of Cherry”, thereby avoids and possible emotional identification with its protagonist. Badii, played in an excellent performance by a non-professional actor (Homayun Ershadi), communicates his distress to the audience throughout the film, but the truth is that we know nothing about him and therefore cannot genuinely feel close to the character.

We don't really know who he is, and even less about why he wants to kill himself or why should he want to use such a strange ritual to do so. "I didn't want to force any interpretations on to the audience" argues Kiarostami; "instead I tried to make them understand that what they are seeing is just a story. That's why I never introduce the character, and I haven't talked about him or his problems; the man continues to be a permanent enigma to us."

Kiarostami's long standing and frequent penchant for filming inside and from the inside of cars also reaches its apotheosis in "Taste of Cherry", which is literally a road movie, albeit with unusual narrative dimensions and extraordinary philosophical features. A road movie where any kind of lineal progression soon disappears, as Badii drives obsessively round and round the dusty tracks on the outskirts of Tehran, sometimes making progress but, as often as not, going backwards, ending up where he was a while before, or simply meandering, losing himself on roads that lead nowhere. Kiarostami's liking for repetition here finds a new pretext for visual expression, where the remote spots that Badii pass through become an almost abstract space, a nowhere place, and therefore prone to a heavy symbolic ending. 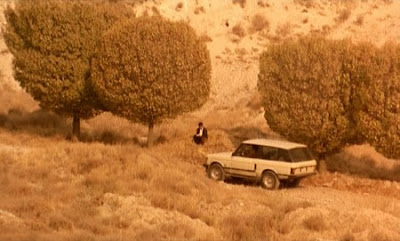 The idea of circularity is part of the film's symbolism. Going in circle means, literally, going nowhere. Badii's journey is a journey into the void: Everything takes on the appearance of a ritual, as if this were a pilgrimage against the background of a land of mythical dimensions where man's existential search is free to take place.

A soldier, a seminary student and a taxidermist are the three people to whom Badii makes his proposition: 200,000 toman in exchange for burying him, the morning after he kills himself. The first, horrified, rejects the proposal; the second tries to convince Badii that suicide is a mortal sin, in which he can have no part; the third, who needs money for medical treatment for his son, finally accepts, but not before explaining that he himself went through a similar experience, but abandoned the attempt after reflecting on the beauties of nature and the small pleasures of life. We should note that Kiarostami's deliberate choice of these characters is very important: The three figures that Mr. Badii meets one after the other represent the three orders of the Indo-European world: the warrior, the priest, and the common man. Or, alternatively the three ages of man: the son, the brother, the father. But they embody the various ethnic groups of Iranian society: Lur, Persian, Kurd, Afghan, Turk. A discreet way of suggesting that Mr. Badii is constantly circling round and around this Iranian social world.

In "Taste of Cherry", Kiarostami, not only avoids any kind of overt labels, he also decides to give the movie an undefined and ambiguous ending. Not merely content with preventing us throughout the film from knowing why Badii wants to kill himself, the director ends up by denying us a clear confirmation of whether or not his plan is successful, in other words, the manifestation of his death. Going at dead of night to the place where he has chosen to kill himself, Badii climbs into the grave and lies there on his back for a few moments, looking at the sky before the screen goes completely black and stays that way for a long minute. 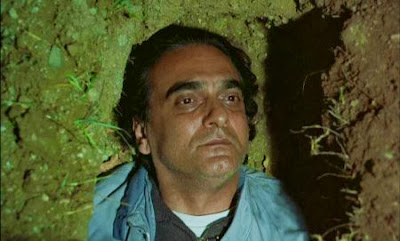 The director himself, while conceding that the most probable ending is that Badii dies, insists that this is not really the most important thing, because the course of nature will continue -- with or without him -- and that is why he added the finishing touch of a kind of video postscript. The film's postscript, its setting now the full green of spring in that same landscape that was so arid and barren while Badii was driving through it in the film, has been commonly interpreted as a note of hope and cheerfulness in the wake of the previous sombre sequence.

The ending of "Taste of Cherry" tries to offer a kind of Utopian vision intended to extract, out of pessimism, suffering and the tragic experience of existence, a form of comfort, or a lesson, which can ultimately help others to redirect their lives.

Fantastic review ! Would love to watch this one.