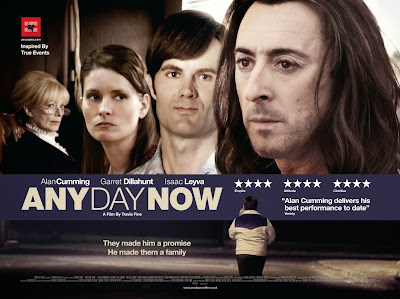 In America, the 1970’s was a dark age, when it comes to rights of homosexuals. Travis Fine’s character drama “Any Day Now” set in 1979 (in West Hollywood), explores the gay adoption rights through an unlikely trio of misfits. The movie also tries to get across the message that a male's femininity isn't hilarious or grotesque and the film never gets preachy in order to push through a pointedly political message.

Paul is attracted to Rudy, but gets embarrassed when Rudy runs storms his office to discuss about the fate of Marco, whose mother was incarcerated in a drug charge. Soon, Child Services comes in for Marco and place him in their ruthless foster care program. Even though, Rudy is broke and doesn’t know much about the boy, he feels the need to look after the child. Paul comes up with the ‘temporary custody’ idea and they both meet the mother in prison to make her sign a petition, so that they can look after Marco (for a brief period). Paul asks Rudy to movie in with him and the boy thrives in that loving and stable environment. But, things take a turn when the couple’s homosexuality comes into spotlight. They are forced into a crusading legal battle to keep Marco.

Travis Fine, the actor-turned-director, opted for career change after 9/11. He worked as an airline pilot. Fine has reworked and co-written the script by George Arthur Bloom, which was written almost four decades ago. He has successfully combined the character flourishes of Bloom and has created a narrative arc, which turns the film into a forward-barreling story rather than being a typical melodrama. The regular gay clichés are not present in this movie and it delicately handles the issue of the relationship between gender non-conformant parents and children.

Yeah, there is lots of sentimentality and cheesy lines like: “all a child needs is love”, but the subtlety and careful pacing absolutely delivers the foreshadowed message. Director Fine should be hailed for having the guts to stay away from happy ending. The ending feels a bit rushed, but showcases the pervasive nature of homophobia. The final adds another layer of poignancy.

“Any Day Now” effortlessly evokes the era and ends with a hopeful note that intolerance – in the case of Rudy – is a thing of the past. It is an intimate character study about people, who always gets pigeonholed in mainstream cinema.

Wow! I had never heard of this move.... thanks for sharing, good insight!