Before Midnight – The Odyssey of a Beguiling Couple 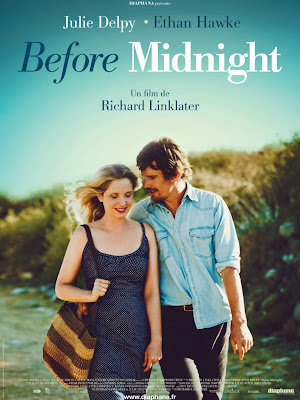 Richard Linklater’s “Before” trilogy might not belong to the list of greatest movies, say, like “Pulp Fiction”, “Citizen Kane” or “Casablanca.” But, the trilogy remains as something intimate, a thing which incites special meaning for people. When Linklater made “Before Sunrise” in 1995, it was praised as the romantic movie of the decade, but no thought that it would be just an episode. A sequel to the first titled “Before Sunset” released in 2004, in which the lovers once again meet up for one rushed, ultimately life-changing afternoon. In the first movie, it was love-at-first-sight or an infatuation which later turned into a romance. The second movie showed the regrets and optimism of the couple as they tried to reconnect. The two movies didn’t resolve anything, but addressed a lot of things. Now, another nine years later, we have “Before Midnight” (2013), where the two crazy romantics discover how much hard work is involved in keeping a relationship.

After walking and arguing in the streets of Vienna (“Sunrise”) and Paris (“Sunset”) the lovers are still doing the same thing, now in Peloponnese peninsula, in Greece (they are vacationing there). The film starts with Jesse (Ethan Hawke), a successful novelist, saying bye to Hank (Jesse’s 14 year old son from previous marriage). Hank says that this is his best summer in his life and takes the plane to Chicago, where his mother lives. Jesse ponders over his estranged relationship with Hank and returns to Celine (Julie Delpy), the love of his life and the woman for whom he divorced his wife. Celine and Jesse have two lovely 8 year old twin girls. Their kindled romance is slowly dying out, like any long-term committed couple. They are coping with each others faults. 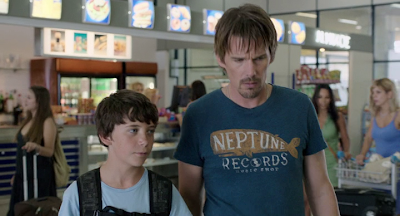 The first hour passes through the luminous landscapes of Greece. Jesse and Celine are staying in an old villa of famous writer along with other guests. There is a long dinner scene, which is a joy to watch. The scene is stages an intellectual conversation with light touch, like any classic French New Wave cinema. Then, the couple leaves their kids and head off to a romantic hotel, where their frustrations flare up. Celine is an environmental activist and she is considering taking a job with the government in Paris, whereas, Jesse wants to reconnect with his son and so would like them to move from Paris to the United States. Their naturalistic exchanges provoke us think about love, aging and work.


Director Richard Linklater is one of the best independent film-maker. From the sprawling high-school epic, “Dazed and Confused” to “Before Midnight”, he’s always been interested in motor-mouthed man-boy like character. His movies’ greatest supporting character is the setting (the time and place). They lend a rich texture to the proceedings. All those trademarks are present here, too, and his poetic meditations on youth, and middle age have steadily gotten better. The original “Before Sunrise” was scripted by Linklater, however, the sequels had intimate involvement of Hawke and Delpy in the writing process. 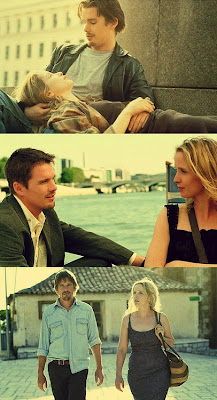 The most powerful aspect of this trilogy is the emotional impact of the conversations: the long uninterrupted takes makes us think that they are someone we know, and their problems seem very real. The ebb and flow of the communication remains undiluted and genuine, unlike the Hollywood’s version of husband/wife relationship. As a viewer, we haven’t even spent three days with these characters, but somehow we know all about them. The script also addresses the various stages of relationships. When they first met at the 20’s they were unbound by responsibility. In the second part, the burden of adulthood and responsibility is slowly weighing on them, now, at 41, they struggle at balancing their respective careers and family.


The acting, as usual, is top notch. As Jesse, Hawke always looks into Celine’s eyes to cut into her misery and anguish. He still remains as the fecklessly romantic man-child. Julie Delpy as Celine gives a marveling performance as her character has matured into a harder, more bitterly restrained soul (perhaps with reason). Her epic hotel-room conversation with Hawke reflects the thoughts of many middle-aged women. Thinking about the twin girls, she backs down, stops arguing, and a little later she comes back roaring, after contemplating the anguish of her career failure. Both the actors’ performances make us realize that they are tough people to live with, at the same time we can’t help but root for them to make it work. 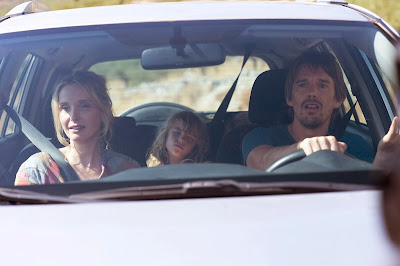 Linklater’s camerawork is unobtrusive and they make us feel that we’re invading Jesse and Celine’s privacy. The masterful long take inside the car and then inside later a hotel-room are neither overblown nor underdone. Although the trilogy is based on the same couple, they are tonally different. “Before Midnight” is brilliant than the first two parts, since it explores new things: like grievance and fear. The romances in the first two movies are something we usually see (even though they were excellently scripted and directed). The third film is more practical. Age and long-term commitment has made them to do defensive backtracking and self-justification.


Cinema is often related with over-produced, special-effects ridden, mainstream fare. It’s not there just for the sake of escapist entertainment. I like escapist movies, but I love a movie like “Before Midnight”, which has the power and guts to confront something real and honest. It is a fitting addition to the trilogy and an experience to be cherished by all the movie-lovers.