We Steal Secrets: The Story of WikiLeaks -- An Evenhanded Portrayal of Whistle-Blowers 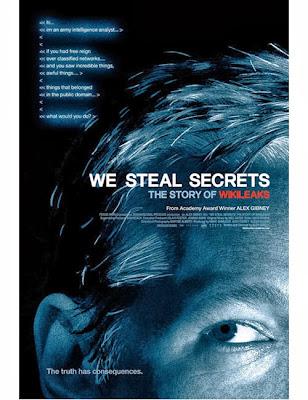 Director Alex Gibney’s (“Enron: The Smartest Guys in the Room”, Taxi to the Dark Side”) documentary, “We Steal Secrets” (2013) prods along the familiar story of WikiLeaks and its founder ‘Julian Assange.’ But, this documentary not only stitches together a story we think we already know, but also explores more complex problems and asks some difficult questions. The sole purpose of a group like WikiLeaks is to expose secrets and to inspire a generation of whistle-blowers. But, what happens when the exposers have their own personal demons neatly tucked away? Alex Gibney is fair and evenhanded. He talks to detractors, former co-workers and also supporters. He also deals with another entirely polarizing figure – the lesser known Bradley manning.

The 130 minute David-Goliath-like story starts in 1989. NASA is geared up to launch a plutonium-powered Jupiter probe. A group of Australian hackers hit NASA’s systems with a WANK ("worms against nuclear killers") worm. A then-teenage Assange was believed to be part of those anonymous attackers. As a young activist, he committed himself to “crushing bastards” (as he himself says) through a galaxy of cyber passageways and trapdoors. He eventually assembled a team of ideal ‘hacktivists’ that intercepted and revealed secret Icelandic banking documents, U.S. diplomatic cables, Afghan and Iraq war logs. And so, the eager, charismatic Assange is martyred by his supporters. Yet, we don’t know much about Manning, the geeky intelligence analyst who provided Assange with most daring cache of documents and is now serving 35 year sentence in a federal prison. 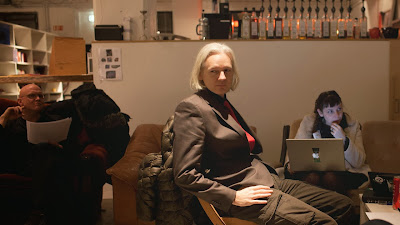 One of the mystery often intrigues a news reader is how Manning has access to so much Intel. The reason is very well explained here. Manning was a loner and among other things he repeatedly began to identify himself as a woman. He was devastated by his actions, and so to seek approval for his actions, he established a chat with hacker Adrian Lamo. Lamo, who himself was in a state of quandary revealed Manning’s identify to FBI, eventually resulting in incarceration and torture.

One of the great aspects of this documentary is, director Gibney brings in accusers, associates, few ex-CIA, NSA men and even Barack Obama's State Department spokesman, P.J. Crowley for an interview. When Gibney shows Assange’s earlier action – exposing the video of American gunship pilots mowing down Reuters journalists – we feel that this guy stands only for the truth. But, the sexual assault charges and his act of making associates sign a nondisclosure agreement (that includes a multimillion-dollar penalty) makes us wonder that does he still stand for veracity or is he some overgrown teenager, who just likes to rebel against any authority.

The popular opinion about the two sexually assaulted women is that they are set up by CIA. It’s an alluring assumption, but Gibney’s interview with one of the accuser makes us think a lot. Further interviews with former WikiLeaks spokesman Daniel Domscheit-Berg and ‘Guardian’ journalist Nick Davies paints us a portrait of a man, who is distanced from real life to really care about what damage he might do.

Gibney is highly sympathetic to the fate of Manning. He hasn’t interviewed both of the main subjects (Assange wouldn't cooperate after the director sought an on-camera interview), but we can feel his shifting feelings for Manning. Assange is now living in the Ecuadorean embassy in London trying to avoid extradition to Sweden, whereas, Manning has suffered lots of tortures and arguably a whistleblower in the purest sense of the word, even though what he did was treason in the eyes of his own country. Even some Defense Department officials appear surprisingly sympathetic to the torture of Manning. 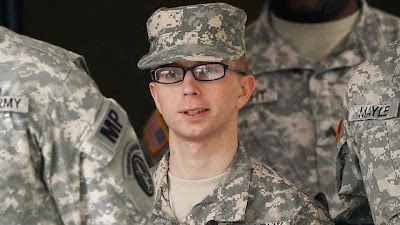 The prolific Oscar winning film-maker sprawls various materials, but eventually makes us experience the full scope of this scary, ugly story. The film is a little long, since Gibney explore new avenues and incorporates new materials rather than being fixed on a single subject. However, all those portions finally raise provocative questions about the limits of loyalty and responsibility.

WikiLeaks supporters and Assange has denounced “We Steal Secrets.” It’s an irony, since the same man insisted that all information is good information. It’s not an easy task to achieve what Assange has achieved, but at the same time we are subtly insisted that he too is a fallible-human being.

We Steal Secrets: The Story of WikiLeaks -- IMDb

Rated R for some disturbing violent images, language and sexual material
at October 18, 2013
Email ThisBlogThis!Share to TwitterShare to FacebookShare to Pinterest
Labels: documentary

I would like to watch this movie. Will it come to Indian Cinema?

@ Satya Prakash, I don't think this this docu will come to India. Documentaries don't even get a limited release here.