Wages of Fear -- A Nail-Biting Ride with Nitroglycerine 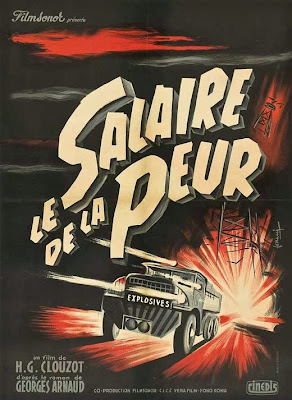 Movie critic, Screenwriter and Legendary film-maker Henri-Georges Clouzet was often referred to as the “French Hitchcock.” He is best known for his 1955 film, “Diabolique”, which still remains as the disturbing psychological thriller of all time. In fact, it is cited that the chilling effect of “Diabolique” is what urged Hitchcock to make “Psycho” (1960).  Before his famous thriller, Clouzet made a controversial suspense film, which made him to be barred for two years by the French “purification committee.” It was called “Wages of Fear” (“Le salaire de la peur”, 1953). The controversial capitalist elements this film possessed was considered shocking for its time.

The existential suspense/drama opens in a tiny, beat-down village named ‘Las Piedras.’ The village is situated somewhere in the heart of South America. Four men are gathered at the bar with nothing better to do. They are flirting with a cleaning girl and are barely managing to survive in this poverty-riddled hell. A powerful oil giant in that area wants drivers to deliver a ton of nitroglycerin. In order to fix the oil-field fire, the nitro is needed to cap the oil-well. The place is situated 300 miles from the village. The drivers had to travel in the rural roads with no safety measures. The oil company loads nitroglycerine into two trucks, thinking that, at least one of them will make it through. 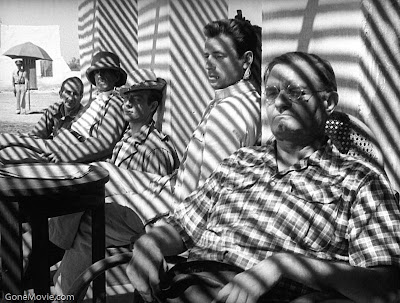 Led by Mario (Yves Montand) the group consists of a self-interested German Bimba (Peter Van Eyck), Luigi (Folco Lulli) and Jo (Charles Vanel). These guys grab the opportunity of driving just to avoid the boredom. The company offers them $2,000, which is a large amount for them. The suicidal, suspense-driven journey starts by demonstrating that what would happen if a drop of nitro is spilled. A wooden platform over a valley, a boulder that blocks the road and an oil swampland – all these things wait for them at every turn and tests the wagerers courage.

“Wages of Fear” won Palme d’or award at Cannes. In 1955, when it was screened in America, the movie was cut nearly 20 percent. The main reason behind this is Clouzet’s depiction of how an American oil company ravages the Third World countries. The oil company, in the film, is named as “Southern Oil Company”, but its initials S.O.C. indirectly suggest the American giant “Standard Oil Company.” This is clearly Clouzet’s indictment of American companies as being ruthless, money-grubbing and amoral. Clouzet’s approach couldn’t be considered hard-hitting by today’s movie standards.  However, he hasn’t glossed over the metaphysical-existential tones like the mundane Hollywood studio movies of that time. 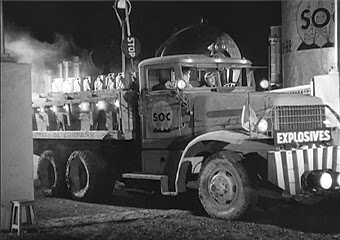 Clouzet smartly separates the movie into two segments. The entire first hour is used for establishing the characters and scenario. This segment was criticized for its slow pace, but this is the part which shows us that, what drives these anti-heroes to take such a crazy job. They are called as ‘anti-heroes’ because Clouzet earlier shows that these men are not ‘good’ in any sense of the world. Mario abuses a local barmaid, Jo likes to exploit anyone in any situation and Bimba, the German expatriate simply hates his life. However, vile these characters are the second cliff-hanging segment makes us care for their fate. Mario, the alpha male of the group emerges as a leader. He doesn’t hide his fear, but controls in very well. On the other hand, Jo, despite putting on a mask of macho bravado, proves to be a whimpering coward.  Like the characters in John Huston’s “Treasure of Sierra Madre” (1948), the men exhibit primal fears and through the fear, the audiences are hooked into the prolonged uncertainty.

The 90 minute second segment is meticulously constructed by Clouzet. The production team faced many difficulties by the merciless weather and several accidents.  Armand Thirad’s atmospheric black-and-white cinematography grabs our attention right from the haunting opening sequence. Like, Hitchcock, Clouzet’s captures the tension visually rather than the high-strung dialogues. The proficient editing also maximizes the tension and peels over the layers of the characters. French movies are famous for their subtexts. Wages of Fear’s subtext is its existential viewpoint. Death is identified as a power that neither neglects age, morality nor bravery. Clouzet uses the fitting final act to depict this viewpoint with a force of biting irony. 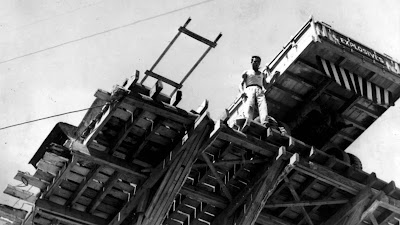 Yves Montand’s Mario was one of his first leading roles. His rugged looks and a large screen presence make Mario, the front man. After, “Wages of Fear”, he had a long successful career and received numerous plaudits. As the so-called hard-hearted guy, Charles Vanel etches out the portrait of a frail, weak old man who is so afraid to die that he is willing to return to his aimless life in the village. Vanel’s performance earned him an award at Cannes, 1953. He went on to work with Clouzet in three films, including the role of Inspector Fichet in “Diabolique.”

“Wages of Fear” was remade by William Friedkin, in1977 (“The French Connection”, “Exorcist”) under the title “Sorcerer.” Considering the usual Hollywood remakes, this one was well-made. The technical aspects were good, but the movie lacked character interaction and subtext. The movie was available in different cuts and all were hailed by the critics. I would prefer the 145 minute director’s cut, which has Clouzet’s ever-deepening, full vision. 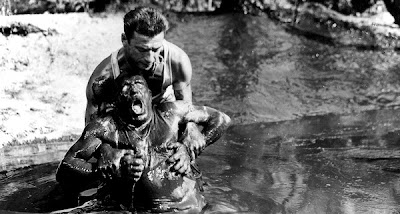 For those who are hooked into Hollywood’s mayhem-inflicting action blockbusters, “Wages of Fear” might seem like an out-dated item, but, any way give it a chance to realize how Clouzet has perfectly intertwined tension/suspense and character development, six decades ago.  This movie is the grand-father of all adrenaline-fueled thrill rides.

wow..and here I was..sitting on my ass unable to find fresh movies from the old set to watch :-)