Low-budget Irish comedies are a delight to watch. They are seeped in Irish tradition and folksy Irish humor. Of course, many comedies falls flat without any coherent plot. Kirk Jones’ “Waking Ned Devine” (1998) belongs to the smoothly entertaining kind and presents us an an detached community of aged characters seemingly free from the compunction to work, and easily tempted into impish alcoholism. It’s a melodrama with a hint of black humor and eventually an ambiguously moral story about duplicity and stealing.

The movie’s events takes place in a picturesque, tiny Irish village named ‘Tulaigh Mohr’ or ‘Tully More.’ There are 52 residents in this town. One day, two wily old men, Jackie O’ Shea (Ian Bannen) and Michael (DavidKelly) read in a paper that one of their fellow villagers has hit the lotto jackpot, worth nearly six million pounds. They are so excited. Jackie, his wife Annie (Flanagan) and Michael decides to find out who that lucky neighbor is. They look out for any polarities of sudden wealth among their friends. After scrutinizing the town’s frequent lottery ticket purchasers, Jackie comes to the conclusion that the winner must be Ned Devine. 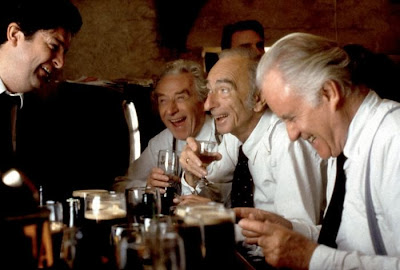 But, Ned Devine is dead. He is dead right before the start of the film. He was sitting in front of his Television clutching the 6.8 million pound lottery ticket. A smile etched in his face, but he was dead of shock. We have to assume that his aged heart can’t take the  pleasure passed through the Television set. The old duos find Ned and also notices that Ned has signed the ticket. A devious scheme forms in the mind of Jackie. They phone the lottery board and the lotto man (Brendan F. Dempsey) arrives to check out the winner’s credentials. The rest of the film is about Jackie and Michael’s guileful plan to extract the money and split it among the residents of village.

“Waking Ned Devine” is an excursion into feel-goof territory. It doesn’t have any of the twentieth century idelogies  and the people, here, revel in their own sheltered community values. The movie is often compared with British comedy “The Full Monty”, but it has none of the latter's socio-political complexity. The desperate attempts of these lovable rogues are rooted with greed, but somehow we care about their childlike innocence and goal. The reason why we care is the robust script filled with magical moments and success of the actors, especially Bannen and Kelly. The script doesn’t fall into the trap of being too clever. It stays simple and is braided with enough irony and charm. It stays away from being overly sentimental and even the melodramatic parts are tinted with sarcasm an humor.

The old pair, Jackie and Kelly, performed by Bannen and Kelly are infused with a wily determination. Whether skinny-dipping  at a cove or riding a motorcycle , these guys exudes a energy that is of a teenager. The scrawny and wrinkled Kelly displays a great comic timing. Veteran Irish actor Bannen holds the center of the film with wit and dignity. Flannugan is charming as the no-nonsense, supportive wife of Jackie.  Director Kirk Jones, a British ad film-maker, exhibits a under-stated control throughout the movie. He gets maximum out of the swooping passes over the huge fields. Jones’ selection of shots are  beautiful to look at (shot in the historical village owned by Irish government) and shows a surprsing maturity for a debutant writer/film-maker.

“Waking Ned Devine” is not a laugh-out-loud film. It is a simply structured character study of a group of charming people who are worth spending the time with.