In the Loop -- The Funny and Deadly Games of Politics 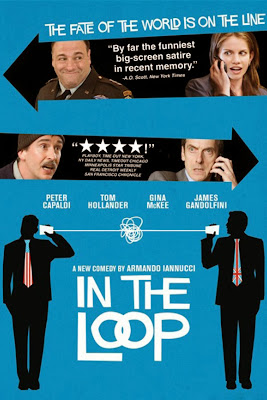 The absurdity of war; the phrase is not new. It’s been going right when we were dwelling in the caves. Early, the cavemen fought each other with bones, now we are having all this state-of the-art technologies to do a group of individuals’ work. The legendary director Stanley Kubrick dealt with the ridiculous thing that goes on inside a war room. It was thinly veiled spoof of cold war tactics. We had Barry Levinson’s De Niro- Dustin Hoffman starrer “Wag the Dog.” Armando Iannucci’s (the British comic master) “In the Loop” (2009), the British-American drama belongs to that dying group of ‘political satire.’ It’s based on the fantastic BBC television series “In the Thick of It.”

The Brits once thundered and plundered the earth with their all-mighty empire. But, now they have lost their status as the key player in global politics. However, they haven’t lost one thing – their wicked wit. “In the Loop” bases its satirical screw-ball comedy in the midst of second Iraq war, where the Anglo-American diplomatic blundering is getting into a new phase. Loose lips swung like unrestrained weapons on the both sides. The result was a war. The movie showcases the conflict on the staff level and makes us see, beneath the comedy, that human race is self-serving, weak and unable to see past its own interests. 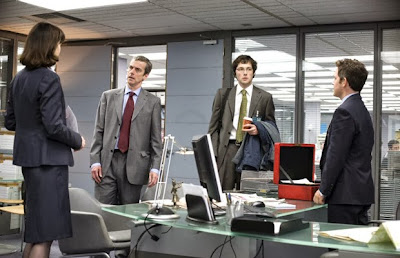 There is not much of a plot in “In the Loop.” Interesting characters just stumble around and showcases satirically, how broken the system of government is, in both these countries. The TV series regular character Malcolm Tucker (Peter Capaldi) reprises his role in this movie. He is the quick-tongued director of communications for the Prime Minister of Britain. He gets into one his rages, when Minister for International Development, Mr. Simon Foster (Tom Hollander) makes a benign comment that “U.S. war in the Middle East is unforeseeable.” That’s just the start. While, Malcolm running around to do damage control, Foster continues to dig himself deeper every time, he faces a camera and microphone.


Meanwhile, in the U.S. war hawks are closing in as Linton Barwick (David Rasche), a U.S. State Department official forms a secret war committee. Foster’s anti-war comments comes to the notice of American undersecretary, Karen Clark (Mimi Kennedy) and a pacifist American general (JamesGandolfini). They are hell-bent on slowing down the rush for war.  Foster is invited to America to represent the U.K. However, his big mouth aide, Toby (Chris Addison) and Foster’s knack for saying wrongful things push him further into the spotlight. 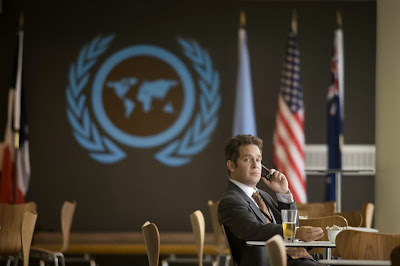 Director Armando neither names the president of US nor the prime minister of Britain. He doesn’t take time to differentiate between Republicans and Democrats or Tories and Labor, but perfectly points out the dangerous ego at work in every administration and its deadly consequences. Although, Armando’s plot is based on Iraq war, the script’s perspectives are broad-based, since the idiocy of 21st century government policies are prevalent all over the world. Iraq war is just a scenario for the allegorical statement. For example, in one scene, Donald Rumsfeld reminiscing Barwick instructs an assistant to strike the undesirable passage from the minutes in a committee meeting. He calmly teaches him that the proceedings don't need to represent what was actually said but what should have been said. Leaking documents and compromising intelligence are also part of any century’s political history.


Armando has co-written the script with his TV series pals, Jesse Armstrong, Simon Blackwell, and Tony Roche. The words they have written are razor sharp and also give the actors a chance to improvise. The swearing tirades are on par with any David Mamet play/movie. Armando and co’s swarms of characters are foulmouthed and irredeemable hypocrites, who are less concerned with body counts than their own ambitions. The low-profile actors enhance the dialogue's sharpness with their body language, especially Capaldi. His bravura performance as the offensive Malcolm is one of the main reasons to watch this movie. Tom Hollander (the villainous guy from ‘Pirates of Caribbean’) as the inept Foster portrays a politician without a spine. Capaldi’s nefariousness is matched by his American counterparts, James Gandolfini and David Rasche, who is delighted to have a live grenade as paperweight.

Most of the US films dealing with Iraq wars are melodramas, which roots out audience sympathies, whereas the hilarious Brit movie “In the Loop” subtly reminds us of the real consequences of distorted and manipulated languages. Among all the bad-mouthing and hectoring, the film successfully delivers its anti-war message, which rings true.