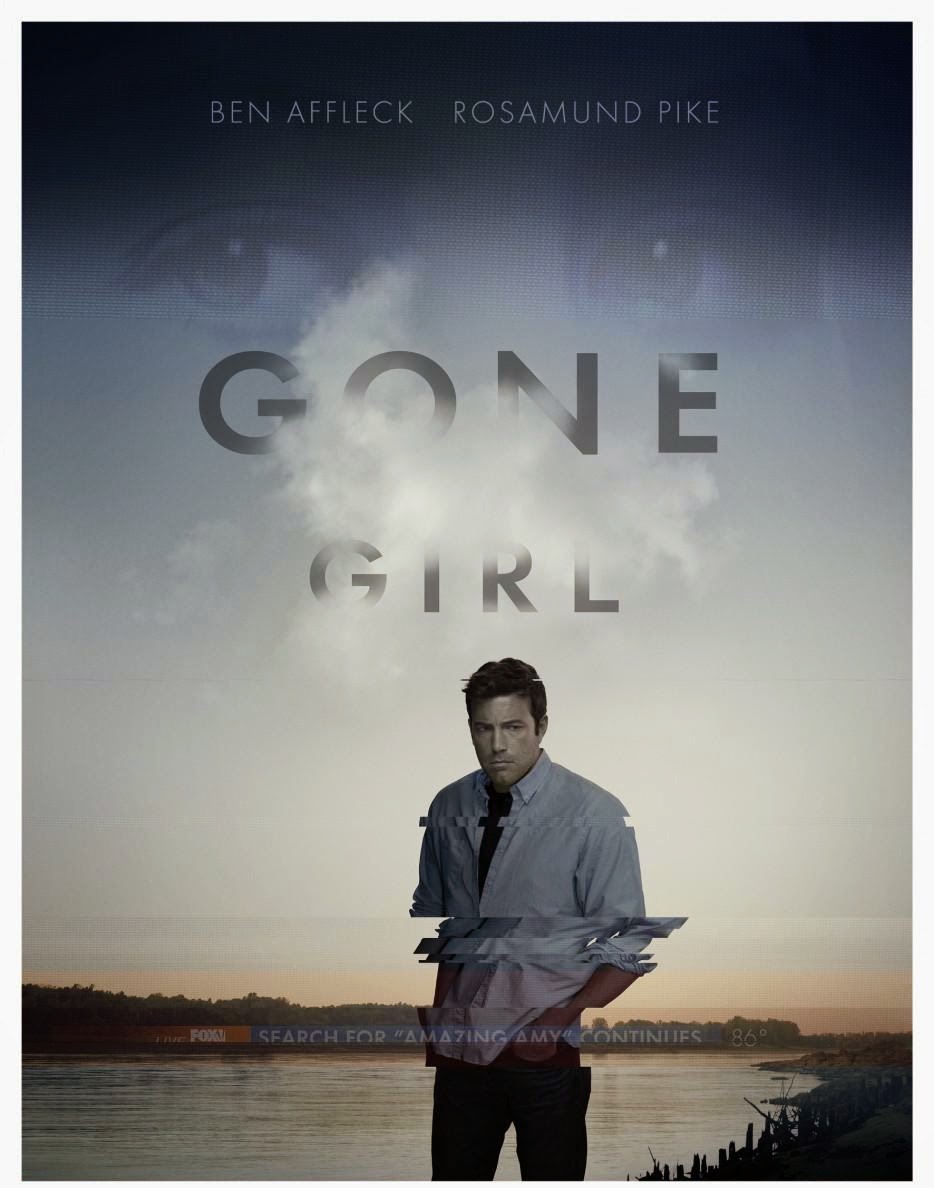 Hitchcock would have been elated to see a blonde femme fatale like Rosamund Pike’s Amy on-screen (and may be Paul Verhoeven too). Based on Gillian Flynn’s best-selling 2012 novel, “Gone Girl” (2014) directed by masterful film-maker David Fincher really owes certain things to Hitchcock’s romantic thrillers. Like the legendary director, who gave us unconventional movies within a conventional genre, ‘Gone Girl’ throws out words like ‘mystery-thriller’ to weave a commentary on our media-saturated culture. As usual, Fincher is at his best, once again interweaving a familiar work as he did in “Fight Club”, “Zodiac”, “The Social Network”, and “The Girl with the Dragon Tattoo”.

The movie is set in a nondescript, rundown Missouri town. Nick Dunne (Ben Affleck), on the morning (July 5th) of his 5th wedding anniversary, goes for an early whiskey to ‘the bar’, which he co-manages with his sister Margo (Carrie Coon). When his neighbor calls out that his cat is straying outside the house, he arrives only to find out that his wife, Amy Dunne (Rosamund Pike) has gone missing. There are tell-tale signs of struggle around the house. Another narrative strand unfolds simultaneously, where Amy’s diary entries provide the background details. Her diary entries show how a fairy-tale like romance turned into a routine of negligence, where love is replaced by resentment. 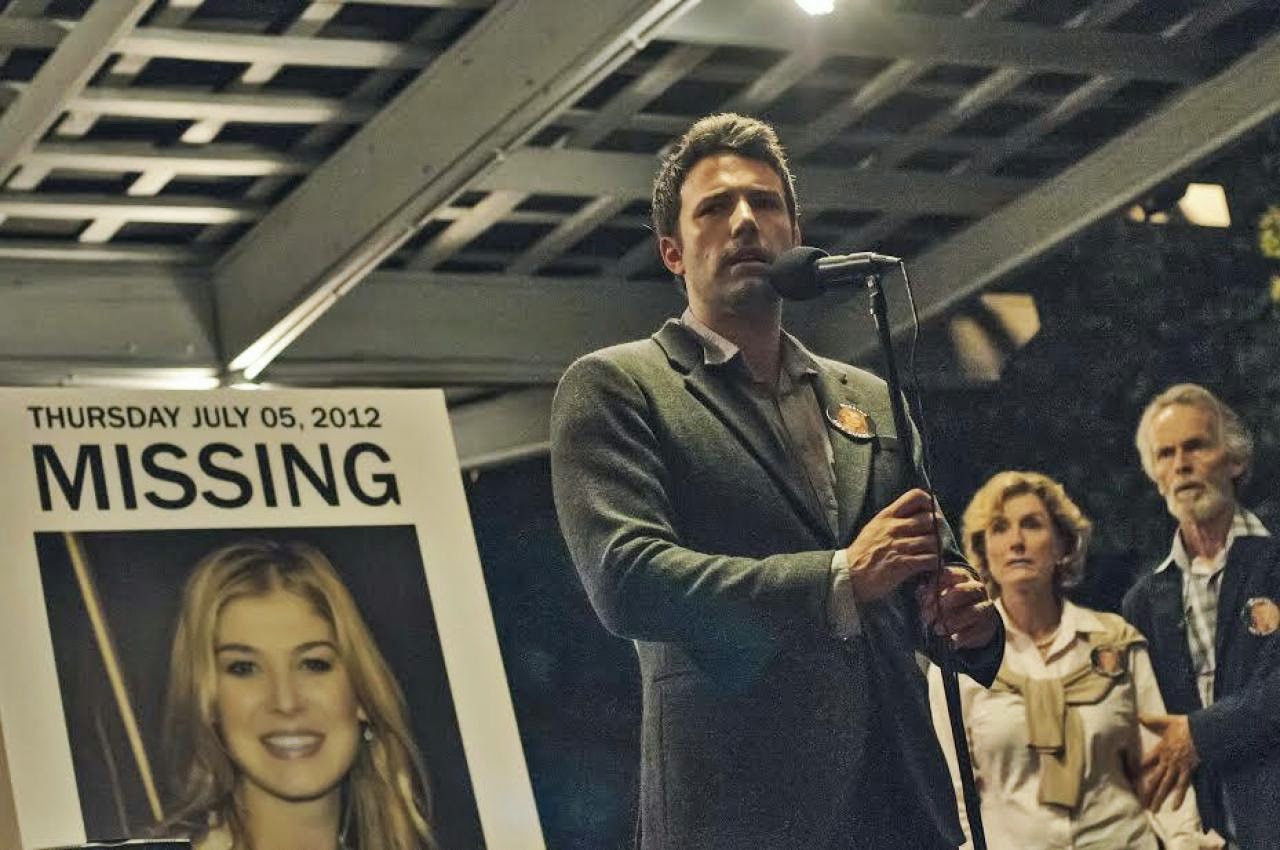 Amy was impressed by Nick’s down-to-earth charm, but when recession hits he becomes a couch potato, playing video games, and also develops some other nasty habits. Amy is the daughter of rich psychologist parents and has inherited lot of money from the books (“Amazing Amy”) written by her parents. Amy’s disappearance slowly turns into a media sensation. And to propel the story forward, media creates a suspect out of Nick. Gradually we also see the ‘skeletons’ inside ‘Nick’s closet’. Evidences pile up in the police investigation, implying that Nick has killed Amy. But, Nick keeps a straight face (and he is absolutely believable) and often says, “I did not kill my wife”. 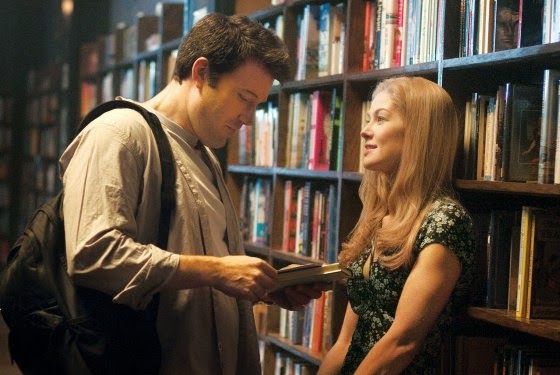 Manipulation remains as the significant theme in the movie. Two primary characters manipulate each other; media manipulates public mind-set, encouraging a frenzied worship; Amy manipulates us; and eventually the so-called ‘victim’ manipulates the media. Of course, displaying the sinistral workings of media, and the way they perceive ‘guilt’ is something that has been repeatedly pondered in the history of cinema. But, here these concepts of manipulation and media frenzy help the story to break out of a conventional thriller framework. In fact, ‘Gone Girl’ would have looked like two different movies glued together, if not for Fincher.

Most of the time when movies present us an unreliable narrator, it fails to be emotionally gripping. Here the intention of duplicitous narrator is shown early, in the half-way point, and so it doesn’t become a half-cerebral police procedural. The proceedings in the second-half incorporate a touch of dark humor and lurid twists. If a sense of mystery had given us some pleasure in the first-half, a scraggy scheme unsettles us a bit in the second-half, but never makes us to lose our interest in the sequences. Director Fincher carefully weaves all these strands into the textures of a crime thriller, and so the commentary on media and marriage doesn’t seem dragged out. Naturally, questions of plausibility arise in the film’s third act, but in order to explore the theme to its fullest, Fincher and Flynn has taken some liberties. 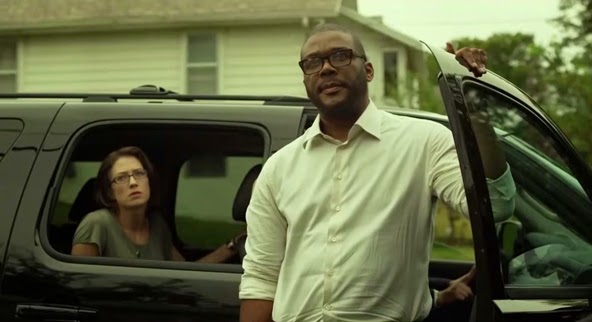 Fincher has always been known for his grand visual style and once again stupendously delivers on that front. The virtuoso sequence from Fincher in the film may be the opening and finishing sequence where Nick asks the significant questions in the minds of a married couple: “What are you thinking? How are you feeling? What have we done to each other?” In both the sequence, we feel that the couples deserve each other. Only our answer to the question, ‘why?’ changes from the first to the last. Apart from distinguished visuals, Fincher also finely explores challenging and difficult characters, bringing the best out of the actor playing those characters. 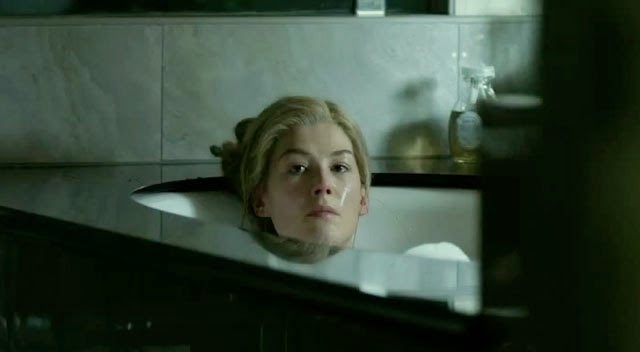 Ben Affleck was often blamed for being smug in playing almost every character. Here, his smugness helps Nick as we wonder whether this guy is a calculative killer or a hapless idiot. For most of her career, the English actress Rosamund Pike has been reduced to do limited roles (Bond-girl in “Die another Day”, “Wrath of the Titans”, “Jack Reacher”). The events showcase Amy more monstrous than her counterpart, but Pike plays the difficult role with an admirable poise, and finds the perfect balance to display both of Amy’s softness and fury. Both the primary characters are ‘unlikeable’, although the actors who played it didn’t turn them into ‘unwatchable’. We may not have liked them from first to last, bit somehow they draws us into their flaws and dark mind-sets.

“Gone Girl” (150 minutes) is a meticulously crafts a moody thriller that offers a tinge of social commentary with sardonic laughs. It is twisted and shrouded in darkness than your average popcorn entertainment.

Loved the way you dissected the movie at different levels. Hitchcock indeed would have been delighted to cast Pike as his leading lady.

As far as I am concerned Fincher has made a deliberate attempt to scandalize the institution of marriage in modern societies. The movie to me is a joke... of almost cosmic proportions... the relation that Nick and Amy share perpetuates this... they are happily married in the eyes of the world (to begin with) but we can sense right from the onset that there's more to it than meets the eye. There is a ritualistic feel to their marriage. And, Fincher has never been cheekier.

Perhaps, the humour element may not seem as obvious if you approach the movie inch by inch, sequence by sequence... but, if one looks at the movie as a whole, the humor seems to be oozing out of its crevices. . I would go to the extent of calling Gone Girl a satire not only on marital fidelity but also on media as well as capitalism.

Btw, here's the link to my review (in case any of your readers is interested in reading it):