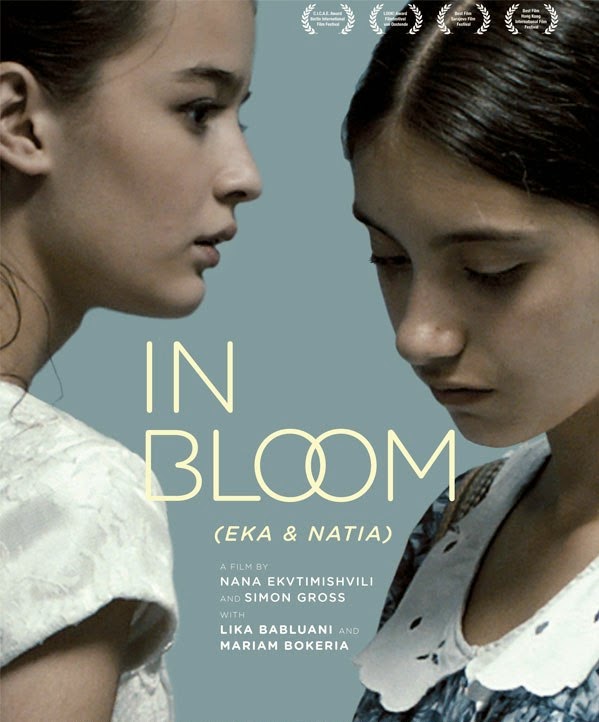 The Neo-realist movies, which born in post war Italy depicted the despair of people living in cities that were reduced to rubbles. Masterful fim-makers like Vittorio De Sica and Robert Rossellini took cinema out of those cardboard surroundings to unadorned, desolate cityscape where real people struggled to make ends meet. The Neo-realist tradition later went on to trigger the Czech new wave movies of 60’s, the Iranian new wave, Romanian new wave, and various other film movements. The film-makers from these nations wanted to show how unbridled authority and order created chaos in their society. In that way, the Georgian movie “In Bloom” (2013) by film-makers Nana Ekvtimishvili and Simon Gross, belongs to the Neo-realist tradition.  It is a coming-of-age drama set in a politically turbulent backdrop.

“In Bloom” is set in 1992, Tbilisi, the capital of newly independent Georgia. A coup d etat and three civil war reached an escalating point in the year 1992. The post-Soviet Union Georgia had a troubled start as dictatorship and war shattered the country’s economy. But, in this film we don’t follow the macho men marching on to war. The story eclipses around two fourteen year old girls, Eka (Lika Babluani) and Natia (Mariam Bokeria). Apart from their country’s political strife, these two best friends also face problems like dysfunctional families, bullying boys, and dreary school days. Eka’s lives with her disdainful sister, aloof mother. She often thinks about her father in the military prison, but refuses to visit him. 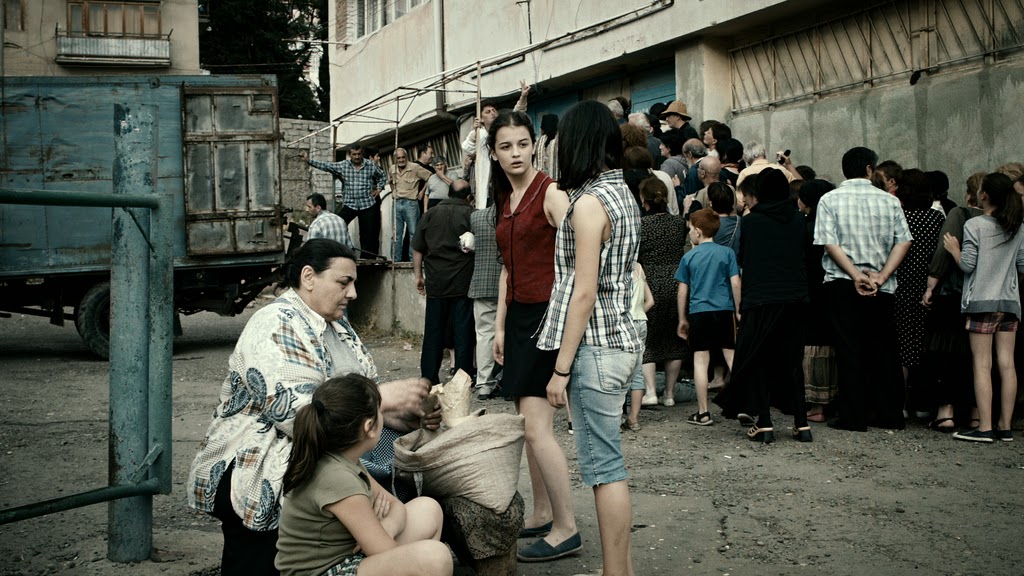 Natia lives with her alcoholic father, bickering mother, affectionate grandmother, and playful younger brother. Although Eka and Natia undergo adolescent troubles and had to put up with standing in queues to buy breads, whenever they are together an indomitable feeling encircles them. Eka is bullied two juvenile thugs, while Natia, a natural beauty, is bothered by good-for-nothing neighborhood boys. As teen brides don’t seem like an uncommon matter, Natia soon receives a proposal from Lado, whom she also loves. But, the boy has to visit his uncle in Moscow and may come back soon. He gives a parting gift not only to remember him, but also to protect her – a hand gun. When a gun is introduced you might immediately think: when will it go off? But the film, for the most part defies those preordained conventions. 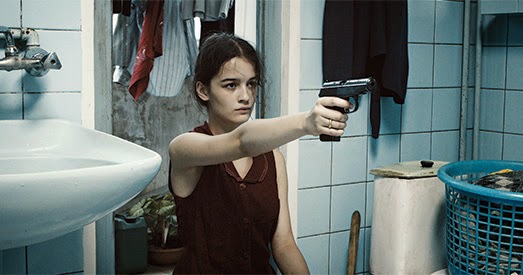 Co-Director and Co-writer Ekvtimishvili is said to have derived a lot from her own girlhood memories of the early 90’s. Although the movie is set in neo-realist tradition, the semi-autobiographical experiences bestow freshness. Scenarios are not conceived to up the dramatic quotient. Bride kidnapping, teen brides, and guns as gift may seem a bit shocking and sensationalistic, but it is said to be a common practice and it is ingrained within the societal values. Natia receives the gun from her lover as if she is getting a diamond ring. And, when later she tells about the gift to Eka, she says that he really loves Natia and that ‘he wants her to be strong’. That conversation about between two friends, where gun is seen as token of love, spoke volumes about the society they inhabit.


Almost every male adult in the film may come off as brutish, but the directors depict them in a way which shows that the problem lies not with individuals, but with the brittle system. Military-men with don’t-care attitude, thugs who threaten woman with shame and dishonor, and absentee fathers just seem to be rotten cogs of a run-down machine. Ekvtimishvili and Gross start off with the long-take realism to convey the characters’ restless every-day life. When the restlessness turns into distress, the long-takes gradually steps-up the tension as we don’t know how the characters are going to behave (Natia holding the gun inside the bathroom immediately comes to my mind). Although the events unfold in a slow pace, the writer duo imparts us with small mysteries and uncertain incidents (like the absence of Eka’s father and kidnapping of Natia). 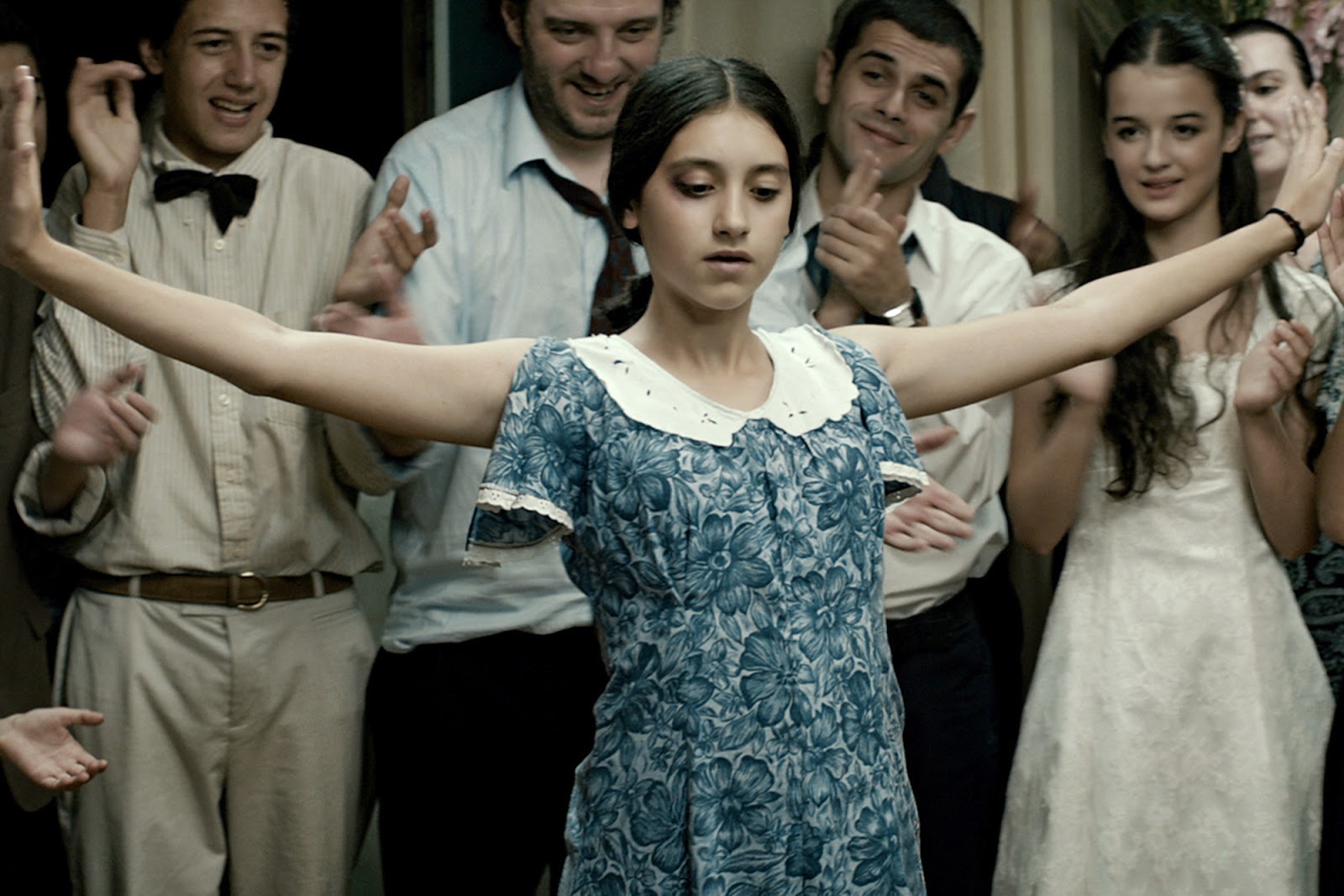 One sequence that captivated me in “In Bloom” is the stunning wedding scene. We feel shock when we see that Natia is married to that brute, and that she is taken it with a laugh. Gradually, our shock disintegrates and morphs into irony, when an old man rises up and calls for a toast to ‘Bless all women’. We could identify with Eka’s distaste at the wedding celebrations. Later, Eka consumes a drink and performs a mesmerizing folk dance. The adults gather around her and clap in an exuberant mood, but she wears a defiant expression conveying all her frustrations. The dance itself is a way of telling that she doesn’t accept everything, although everything she has known is changing. It is really an incredible scene, especially after getting to know that Babulani (the girl who played Eka) have acted before. Cinematography by “4 Months, 3 Weeks, 2 Days” fame Oleg Mutu lends a remarkable realism and provides a fascinating snapshot of urban decay in a war-ridden society. A few impediments in the script (in the last 20 minutes) could be overlooked upon the transcending performances and camerawork.


“In Bloom” (97 minutes) is an engrossing and heart-breaking movie experience that depicts the turbulence of youth triggered by a politically turbulent country.