Blancanieves -- An Invigorating and Stark Retelling of a Renowned Fable 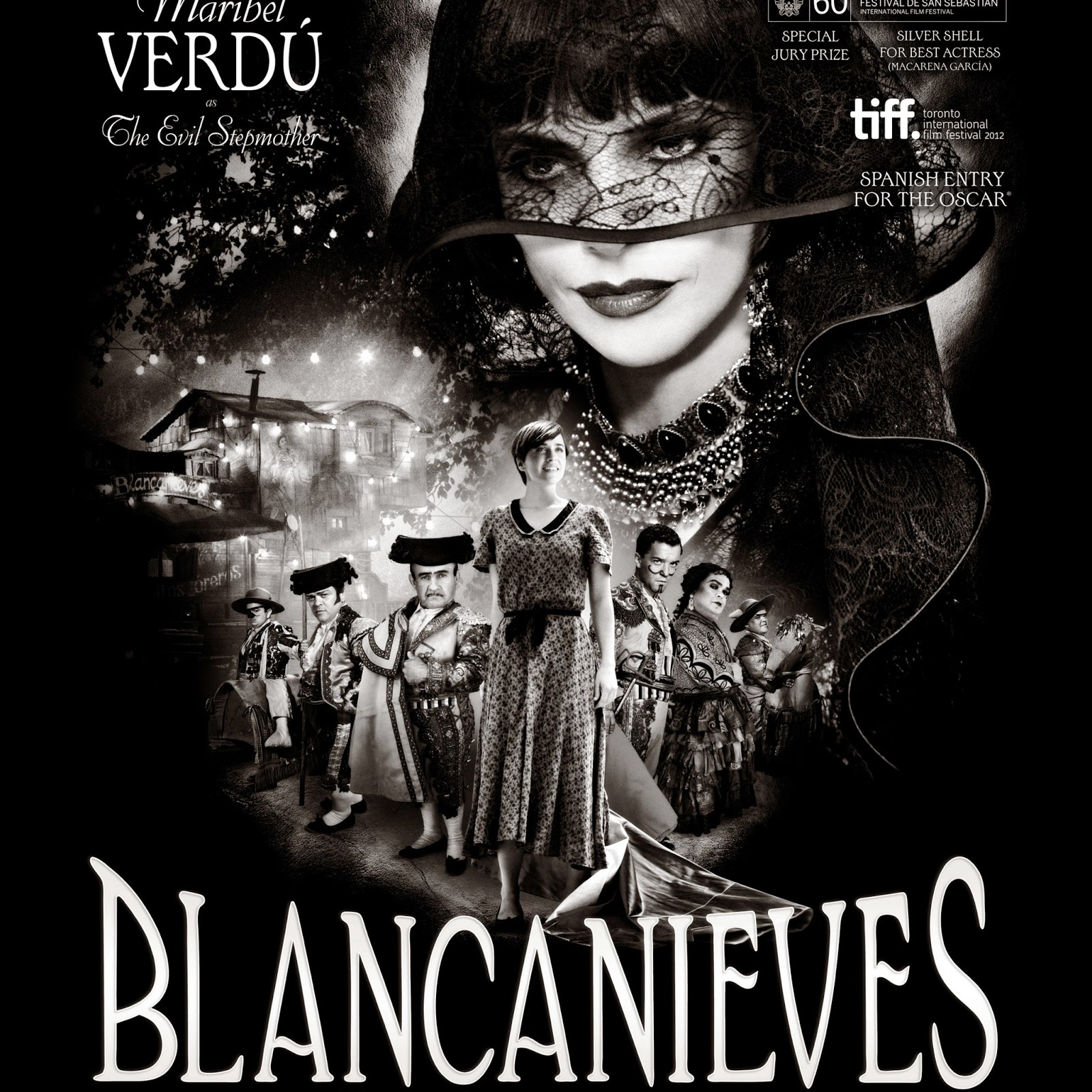 The prospect of seeing a live-action re-imagination of fairy tales nowadays gives the viewer a daunting feeling. The recent Hollywood offerings like “Hansel & Gretel”, “Red Riding Hood”, “Snow White and Huntsmen”, and “Mirror Mirror” ransacked those classic fables to quench the thirst of Hollywood’s money-demanding machinery. But, rarely do we see director like Pablo Berger, who not only has the guts to ground a fairytale with reality, but also chooses a different, risky mode to retell the story. Spanish film-maker Pablo Berger’s “Blancanieves” (2012) is the sensual reiteration of Grimm fairy tale, “Snow White”. It’s filmed as a black-and-white silent film, using the camera effects and tricks of that era. “Blancanieves” doesn’t get pulled down by the commercial hoopla and stays authentic in re-creating the glories of the silent-era days.

The 2011 five Oscar winner “The Artist” proved to modern audiences that they can love black and white film with no dialogues. “The Artist” paid a perfect and affectionate homage to the silent cinema, but when it was touted as heavy-weight contender in the Oscars, it fittingly earned the title ‘over-rated’. Perhaps that happens all the time, when Oscars choose heart-warming, sentimental flicks over an enigmatic, thought-provoking movie. “Blancanieves” possesses the cuteness and corny visual elements of silent movies, but at the same time faintly imbues the grim imagery of Luis Bunuel or Todd Browning. In short, it finely balances between Disney sweetness and Grimm’s bitterness. 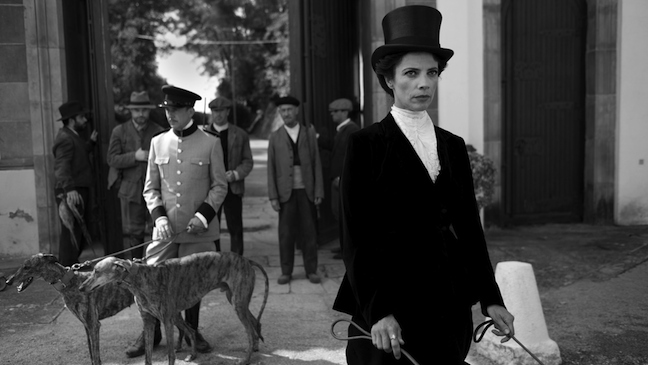 The film is set in the province of Seville, in the 1920’s. In this energetic retelling, a revered matador, Antonio Villalta (Daniel Gimenez Cacho) is fatally wounded at the end of a bullfight. Te accident is witnessed by the matador’s beloved, pregnant wife (Inma Cuesta), frightening her to go into labor and dies in her childbirth. She leaves behind a beautiful daughter named Carmen, but the child is disowned by the now quadriplegic father Villalta. The heartbroken, wheel-chair stuck former matador marries a scheming nurse, Encarna (Maribel Verdu). 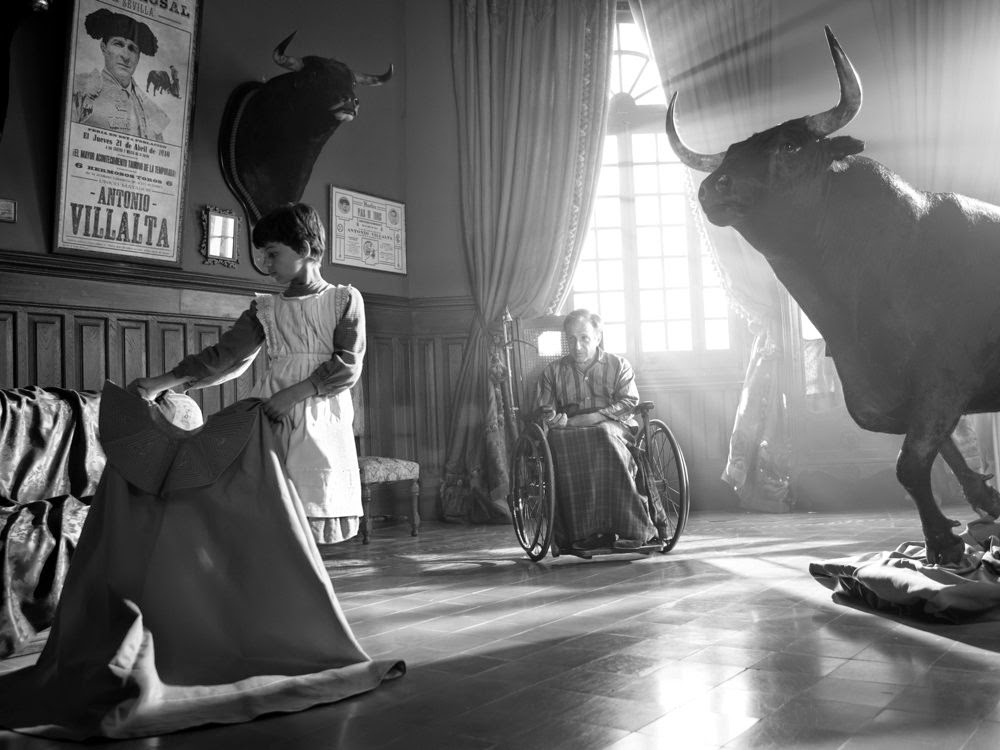 At the age of seven, Carmen’s (played by Sofia Oria and Macarena Garcia) grandmother passes away and she is now forced live with her domineering step-mother. Encarna keeps Carmen away from her father. Carmen stays in a dingy coal cellar and forced to perform menial tasks. However, fate unites Carmen with her father. Apart from finding love, Carmen also learns few secrets about the art of bullfighting. The series of twists in “Snow White” stays the same, although the stepmother doesn’t have a mirror and doesn’t turn into a witch. However, her personality has a kinky side (like putting a dog collar and leash on her lover’s neck). The movie’s take on ‘prince charming’ and its portrayal of the dwarfs is also quite different from what one usually expects.

The dark turns, offbeat undertones, and a feminist take makes “Blancanieves” more engrossing than a glossy Hollywood fairy-tale retelling. Of course, the same elements could deem the movie unsuitable for kids. It’s not as outrageous as Czech film-maker Jan Svankmaker’s “Alice” (1988, a surrealistic adaptation of “Alice in Wonderland”), but there is a bit of black humor (involving step-mother), little violence, and a bittersweet, ponderous finale. But, still many have pointed out that “Blancanieves” isn’t as dark as the original ‘Grimm’ story. 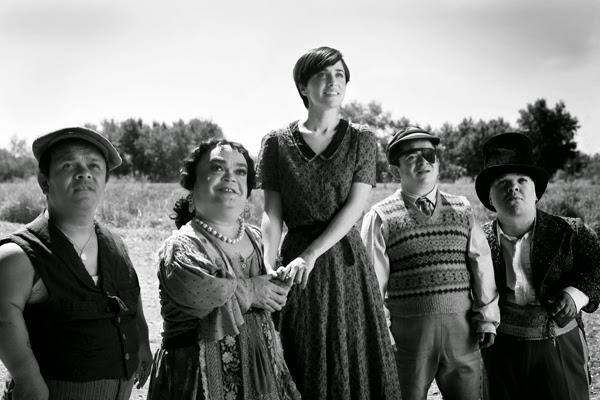 Director Pablo Berger gives us a pure cinema by conveying a lot through exquisite framing and facial expressions. Like a true silent-era film-maker, her doesn’t rely heavily on the title cards, but finely advertises the actor’s various emotional through rich use of close-ups. Apart from concentration on the various ranges of facial expressions, Berger also sets up wider shots of the barren landscape and the towering mansion, displaying the solemnity hovering over Carmen’s world. The speedy montage in the early bull-fghting sequence and the passage of many years expressed by fluttering of a bedsheets in a laundry line (where the child Carmen becomes a young lady) were all some of the splendidly edited scenes. 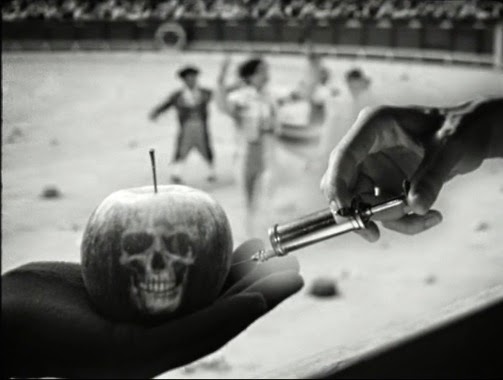 The finale sort of chucks out the word ‘happily’ and embraces the ‘live ever after’ word. It is unforgettable and un-gimmicky, but it’s also the movie’s little flaw. There is nothing wrong with the ending itself, but the events unfold before the final act doesn’t prepare the viewer for ‘Grimm’ tale ending. Despite, the aforementioned black-humor, when the amnesiac Carmen joins the dwarfs’ troupe the movie’s dramatic quotient steps-up a bit, showing all signs of a Disney ending. Thematically, the ‘prince charming’ interpretation was wonderful and insightful, but the obscure change would appall a viewer expecting something pleasurable like “The Artist”.

Found this film very interesting when I first watched it. One of my favorites is GImenez Cacho and he did not disappoint. Very good review you've written here. May the movie reach more and more viewers!