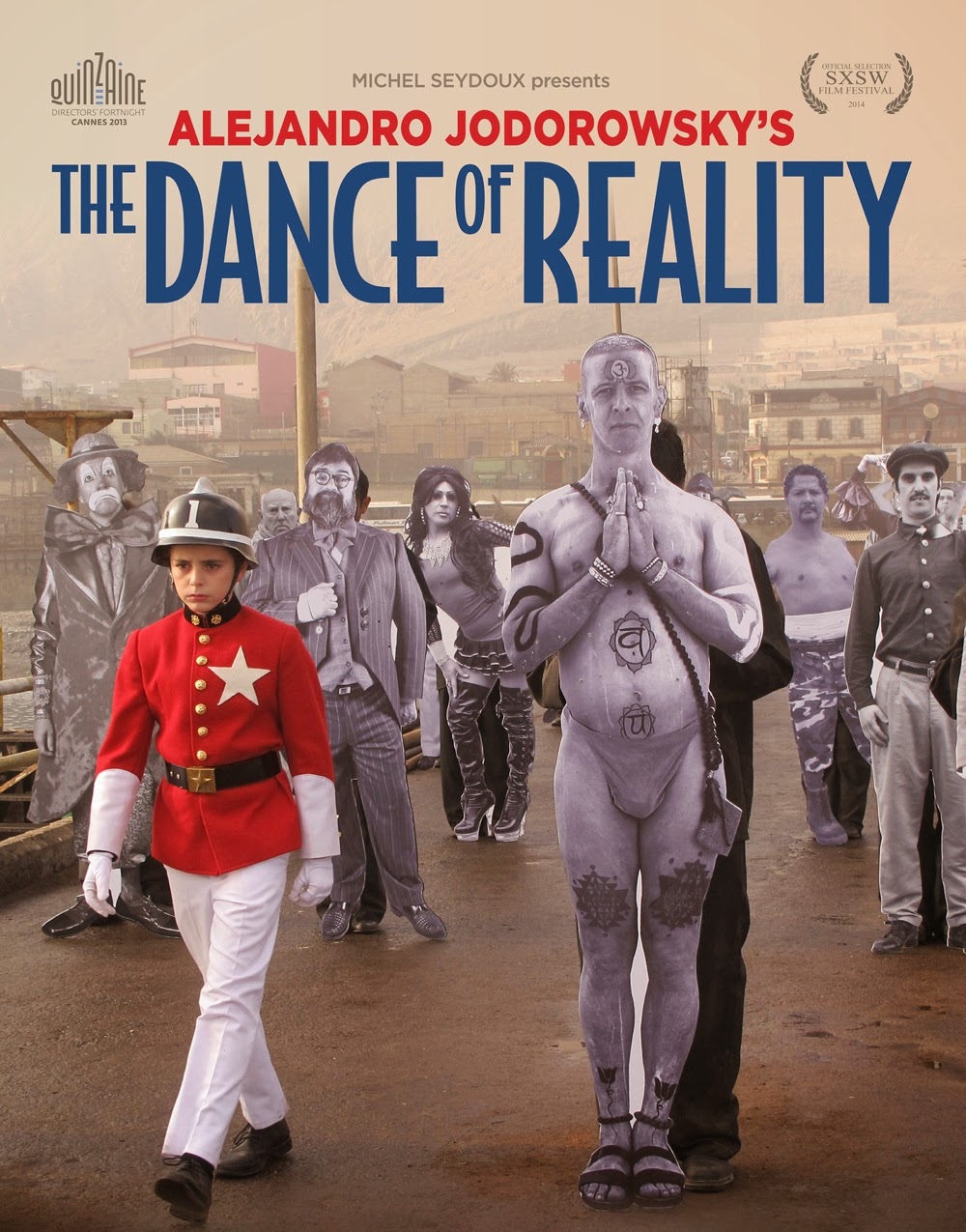 If David Lynch exposes us to the incomprehensible, sickly and strange things that lay behind the so-called normality of life, the master of midnight movies, Mr. Alejandro Jodorowsky displays us the profound humanity that is positioned within the seemingly uncanny human nature. They are like both sides of the same coin. Alas, the 85 year old controversial director Alejandro has stayed away from movie-making for the last twenty three years. If you had been perplexed by his raw, provocative images in his films “El Topo”, “The Holy Mountain”, “Santa Sangre”, you might have also thought: where do these avant-garde images come from? “The Dance of Reality” (2013), a semi-autobiographical exploration of Jodorowsky’s painful childhood, tries to demonstrate the origin of those images, and the philosophy behind it.

Like all his films, ‘The Dance of Reality’ couldn’t be easily categorized to a particular genre. Although the plot promises us a coming-of-age tale, Jodorwsky imbues enough surrealism and magical-realism to make the viewer think about Fellini’s “Amarcord”. The movie would mainly interest those who have already been familiar with his earlier works. ‘Dance of Reality’ could also be called Jodorowsky’s most gentle and elegant film, although we witness angry limbless mob, a wife urinating on husband to heal his infection, mother and her pre-teen son playing hide-and-seek after stripping naked, and some other grotesque surrealism. 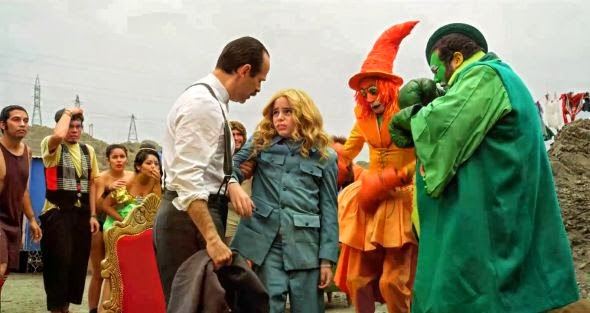 “All things were connected in web of pleasure and suffering” says Jodorowsky. The movie despite its episodic swirls of fantasy and digressions seems to narrate the truth behind this aforementioned statement. Jodorowsky endured an alienated childhood in the 1930’s, in the coastal town of Tocopila, situated at the end of Chilean desert. The Jodorowsky family has descended from Ukrainian Jews, who all are considered as outsiders in the country & town. The shy young Alejandro (Jeremias Herskovits) is beleaguered by his father Jaime (Brontis Jodorowsky—the director’s own son), who is a firebrand communist. Jaime dresses and sports a mustache like his hero ‘Stalin’. 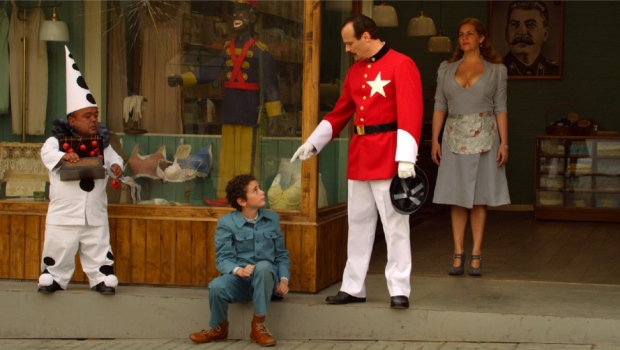 When we first see Alejandro he is wearing a long blonde wig. The wig is put on him by his buxom mother Sara (Pamela Flores), who thinks her late father’s sensitive spirit, is within her son. She talks like an Opera singer and tries to nurture the Alejandro by showing him the path of God. But, father Jaime, an atheist, is hell-bent on turning his shy son to be manlier. He starts by removing that girlish wig and later subjects the boy to various cruel punishments (he slaps him and makes the boy asks for more), forcing him to endure all those without shedding a tear. Jaime owns a shop; he is a fire-fighter and also a member of secret anarchist group. Beneath this monstrous facade, Jaime seems to be an anxious man-child. In the later episodes, Jodorowsky constructs new, weird worlds for his parents and shows his longing for a mollycoddling mother and redeemed father. 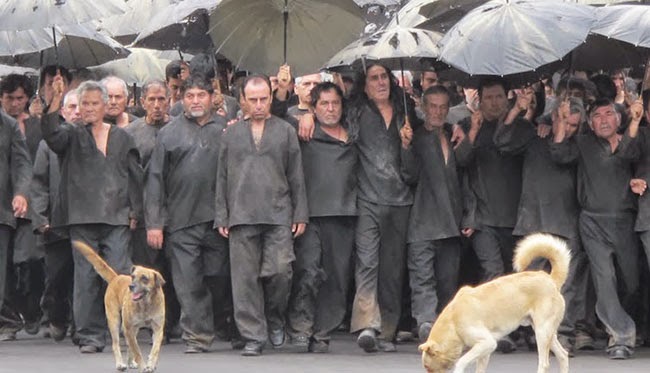 In “The Dance of the Reality” mainly showcases the cycle of abuses that stems from a single oppressive culture. We could empathize with each & every character in the film, but at the same time they also actively participate in acts that insults or abuses other weaker groups. This main theme is masterfully established in a metaphoric scene on the beach (which Jodorowsky claimed in an interview that it happened for real). In this scene, the boy runs away from his father, who taunts him for being effeminate, and throws a rock at the sea. It weirdly causes the fishes to flop on land, bringing the seagulls to feast upon fish, and eventually the humans beat away seagulls to take the fish to market. Our sense of empathy travels from the boy to the impoverished coastal people. Each has to do that particular brutal act to have place in the society.

This metaphorical scene is sort of repeatedly insisted in various scenarios. The father, a hardline communist, kicks at an amputee. We feel sorry for that amputee, but later that same guy shows what a fierce anti-Semite he is. The father solely takes water on his cart to disease-infected people, mainly to show his bravery and kindness. But, then the infected and starved people kill his donkeys, tied onto the cart, to feed. And, once again our sense of empathy gradually dissipates. On the other hand, Jodorowsky also indicates how abuses encourage the oppressed to oppress someone below them. On the outset, people of Chile or Tocopila are suffering under a fierce dictatorship. But, the local people sort of blame it on the Jews (“Even dressed as a fireman, a Jew is a Jew!” -- father Jaime imagines them saying). These insults changes Jaime to hide his identity, claiming that there is no God, and to act as a dictator within the family. 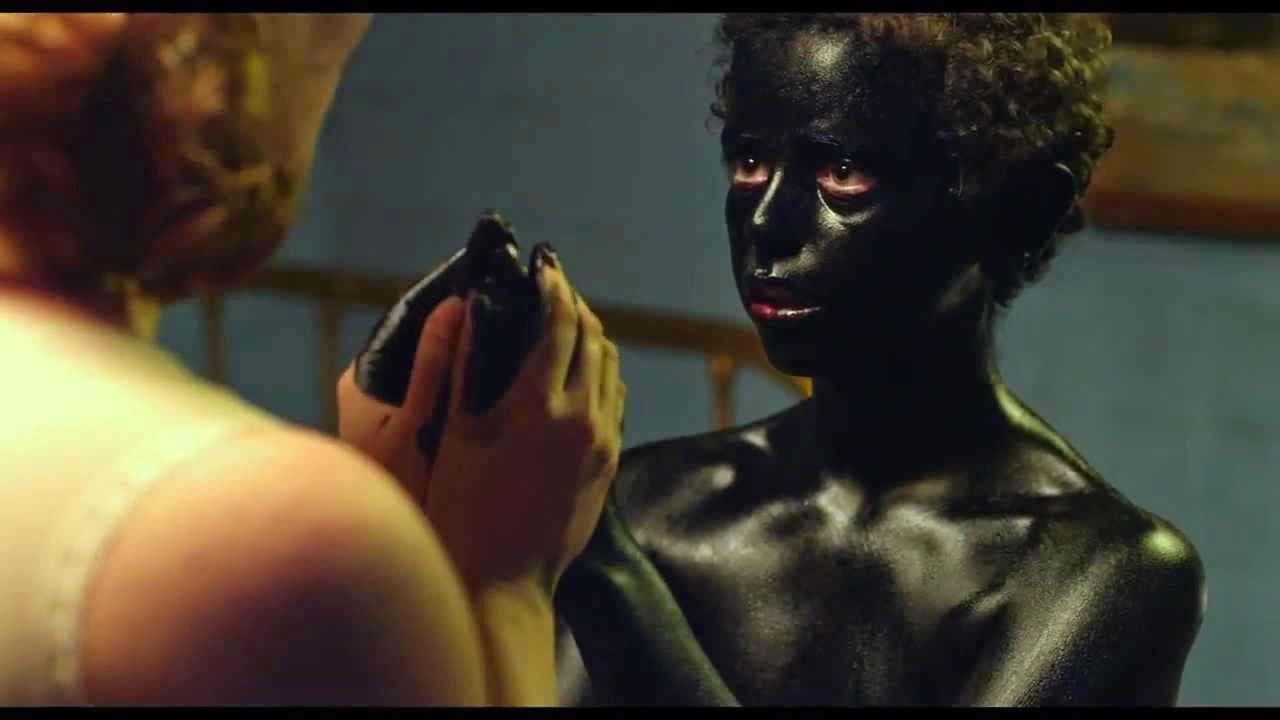 I think that through the ‘naked hide-and-seek’ scene, Jodorowsky tries to explore the awfulness behind the black face minstrel shows of west, conducted primarily by Jews. Until the civil-rights moment of the 1960’s, these minstrel shows presented grotesque stereotypes on African-Americans. The Jews of west, who themselves were persecuted minorities in those times, is said to have performed these ugly caricatures on another fiercely persecuted race. The mother’s message of becoming ‘invisible’ and ‘delving into darkness’ may reflect this mindset. All these mentioned sequences may only exhibit a bleak vision. But, Jodorowsky’s imagery doesn’t with end wickedness. In the most part of second-half the director portrays events which indicates that within such monstrous cruelty, there is a possibility for kindness and grace (the old carpenter episode and Jaime’s rescue confirms this vision). This vision of not dividing the world into good and bad is what makes Jodorowsky films more captivating. 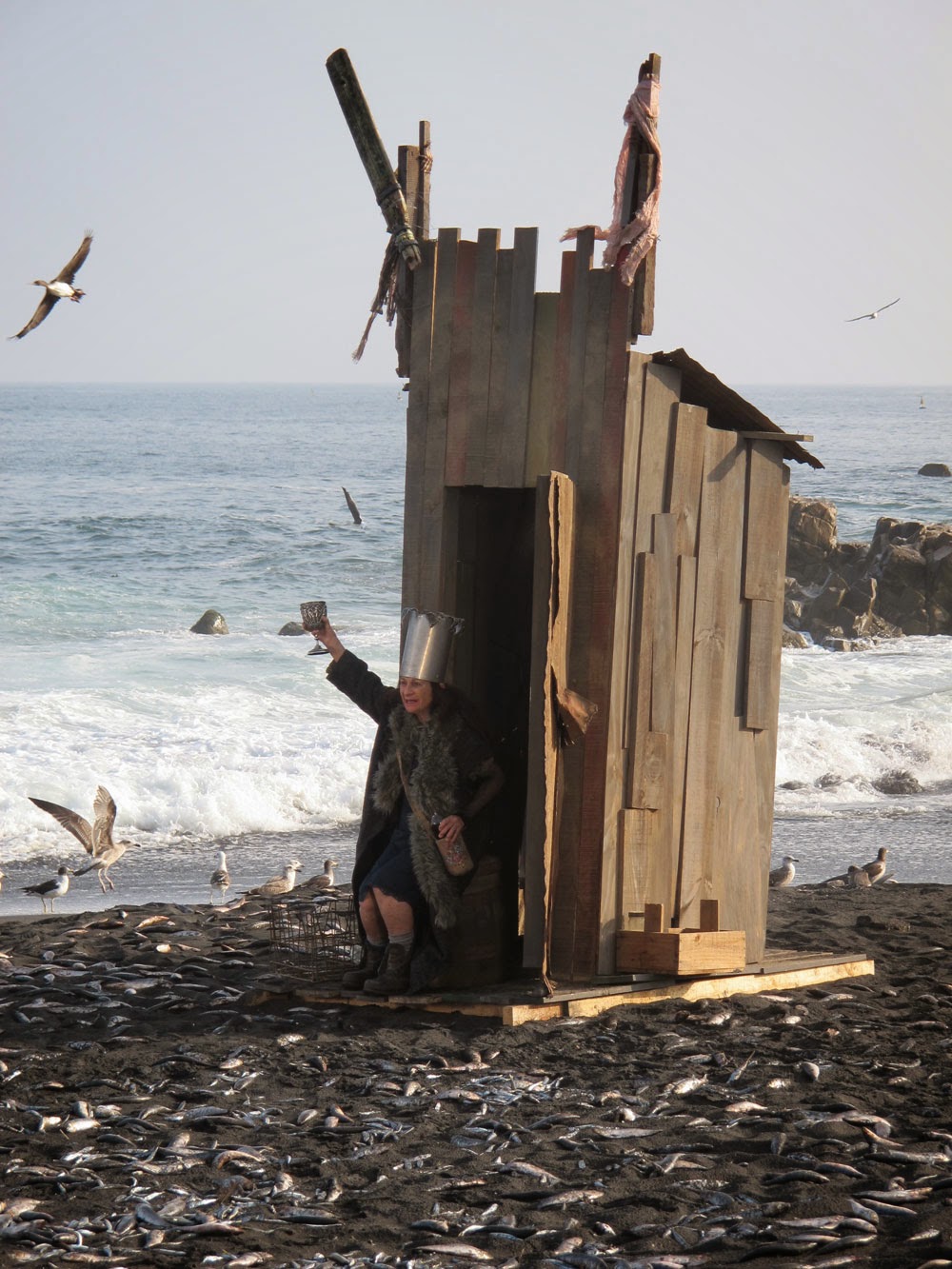 Jodorowsky who has stayed from film-making for more than two decades have come back with some exuberant images on-screen: a shot of one-hundred chairs; a strange white-faced guy dressed as ‘Queen of Cups’; a novelty dog competition; a macabre dream of Alejandro lying next to the charred corpse; the infected people walking though the desert; a theologist painted in Hindu religion symbols; red shoes; bedraggled amputees; and many other insightful images baffles us. Despite certain weirdness, the director never fails to generate real emotions, especially in the scenes where Jaime is redeemed.

In an interview director Jodorowsky claims that much of the events in first half are true, but those in the second-half, when the father takes off to kill the Chilean dictator are all a fiction. In the real life, Jaime was a passionate communist, who always only talked about killing the dictator (General Ibanez). The real Jaime never found the religion or sought redemption in a church. Jodorowsky confides, “I humanized my father”. In real life, Jaime seems to have only given painful memories for Jodorowsky. He also shockingly reveals that “my mother never touched me”. However, the film-maker seems to have attained wild imagination as a gift through all these afflictions. Those who are not familiar with the director’s work would definitely be freaked out (I think “El Topo” (1970) would be best place to start), but remember that Jodorowsky doesn’t break cinematic taboos solely for the shock value it inhibits. There’s a bizarre vision, truth or perspective behind those appalling sequences. 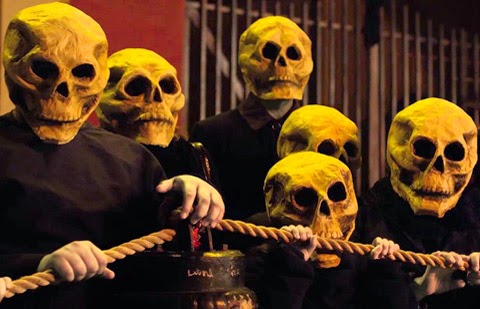 “The Dance of Reality” (132 minutes) is a surrealistic auto-biographical tale that lets us into bizarre and wildly imaginative mind of Alejandro Jodorowsky. Its mystifying narrative and grotesque images may appeal only to niche audiences. For me, it’s a meditative spectacle.