The Tale of the Princess Kaguya -- Soul-Stirring 'Studio Ghibli' Anime 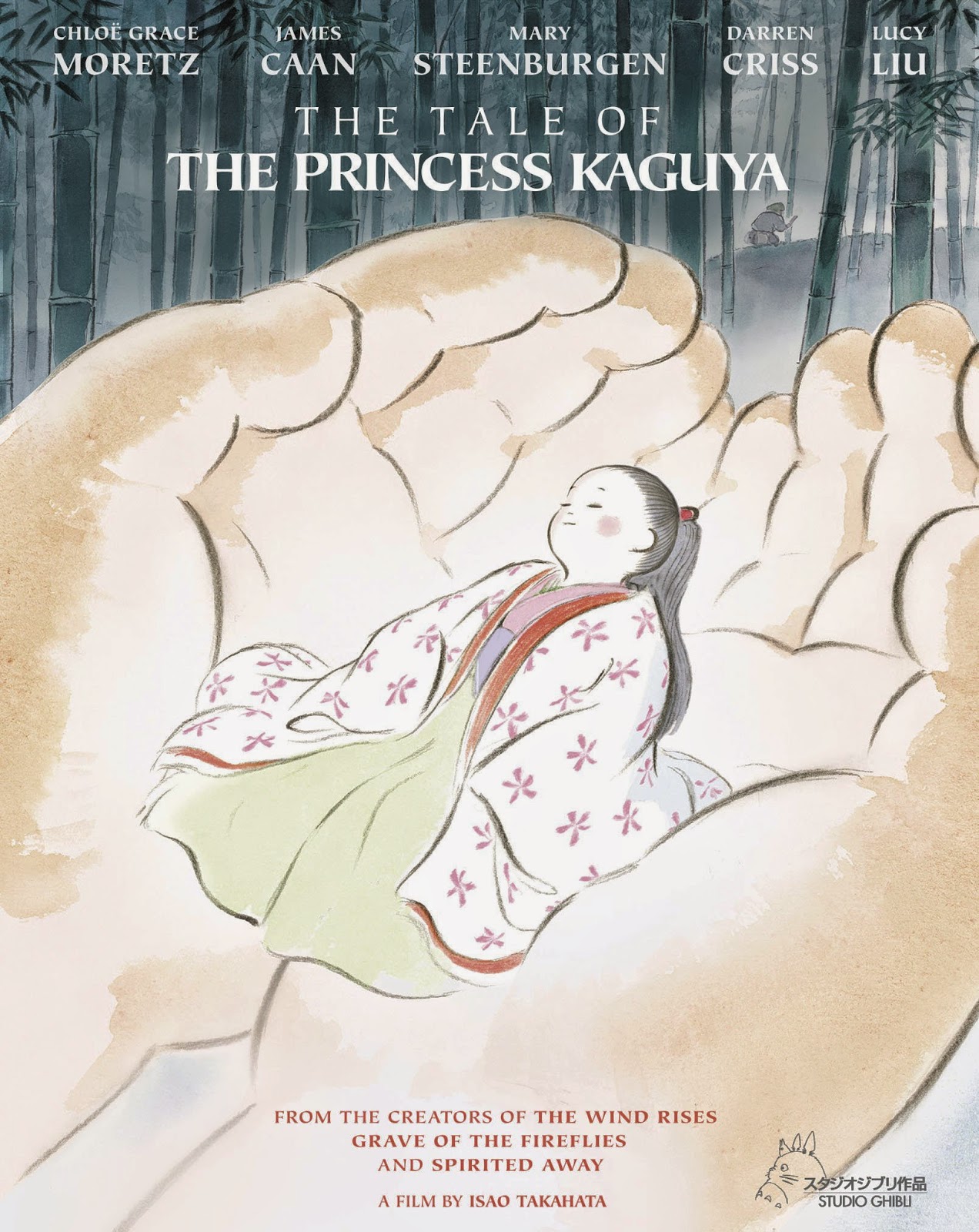 Japanese anime studio ‘Studio Ghibli’ (founded in 1985) under the guiding hands of Hayao Miyazaki transformed animated feature as one of the highest form of art, while animation in rest of the world has been succumbed into a form of entertainment only for kids. But, with the retirement of Miyazaki and certain financial problems, the golden age of Studio Ghibli might be coming to an end. Recently it was suggested that the studio might take a break from making movies (after the release of “When Marnie was There”). Studio’s Ghibli's another prominent film-maker (& co-founder) Isao Takahata (aged 79) – known for works like “Grave of the Fireflies”, “Only Yesterday”, “Pom Poko” -- has also announced his retirement. All these news of dissolution and reality of retirements only makes the experience of watching Takahta’s ethereal “The Tale of the Princess Kaguya” (2013) more heart-breaking. It possesses the inventiveness and singular beauty we witnessed earlier in “Totoro”, “Princess Mononoke” and “Spirited Away”.

The 10th century Japanese folktale “The Tale of the Bamboo Cutter” (also known as “Princess Kaguya”) is considered to be one of the oldest stories in Japanese culture. It’s also got be one of the early sci-fi tales, detailing the life of a mysterious girl hailing from ‘Tsuki-no-Miyaki’ – The Capital of Moon. Under the hand-drawn animation, the story’s beauty becomes a marvel. The anime has a little different look from the usual Ghibli flicks. Director Takahata has chosen water-color aesthetic to encompass the tale’s exquisite imagery. Thematically the tale addresses Ghibli’s trademark theme: ongoing and everlasting battle between advanced civilization and nature. It depicts how a false sense of sophistication turns even honest feelings like love into hollow ceremony. Most importantly, the tale jubilantly contradicts from Disney’s or western fairy tales’ recurring storyline: every girl wants to be a princess. 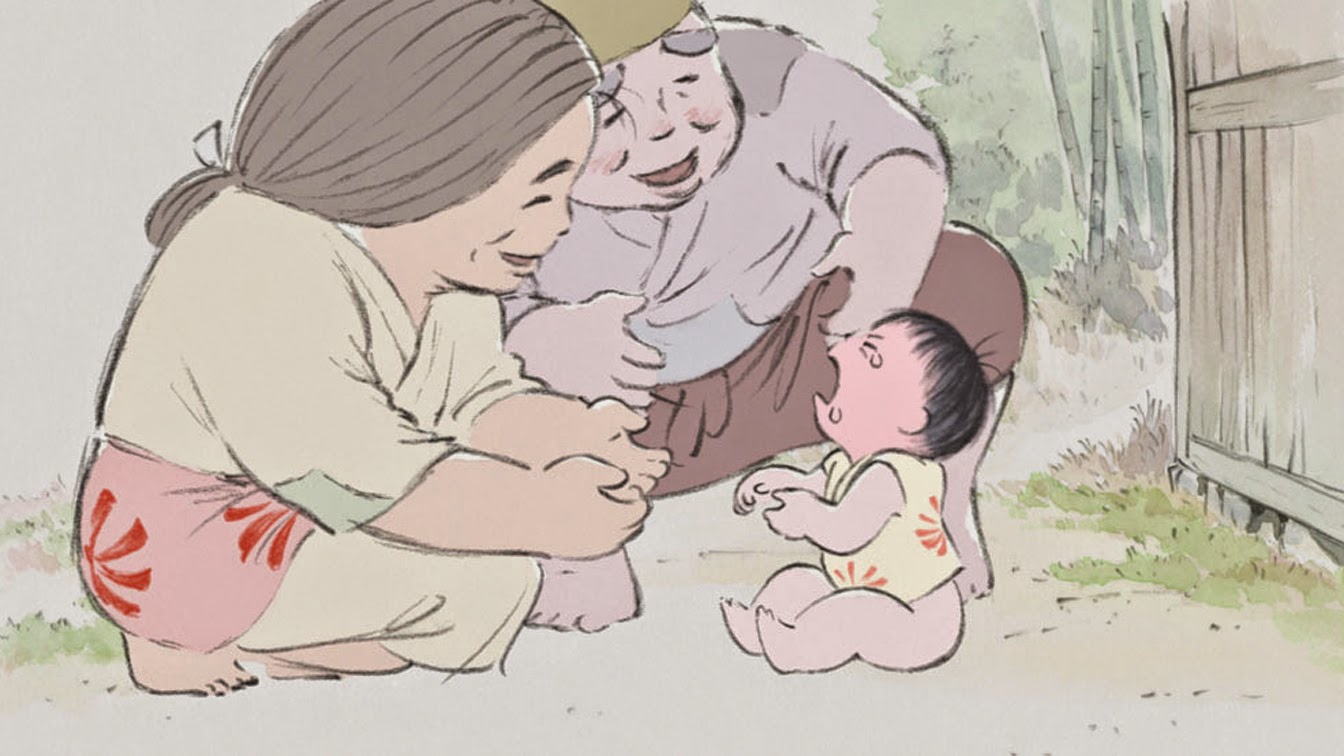 “Kaguya” commences with an old bamboo cutter discovering a miniature girl inside a glowing stalk of bamboo. Bamboo cutter’s wife mistakes the miniature girl for a doll, and in her hands she transforms into a healthy human baby. The childless old couples marvel at the child’s antics and call her as ‘princess’. However, the girl isn’t like ordinary human baby. Within days, the baby starts to walk and in months she starts running around with other children, singing songs. At every joyous or adventurous moment, she seems to spurt like a bamboo tree. Local children call her as “Little Bamboo”. The princess is an indomitable spirit, gleefully playing among the beautiful natural world of trees, rivers, and birds. Her special friend among the group is a boy named ‘Sutemaru’. 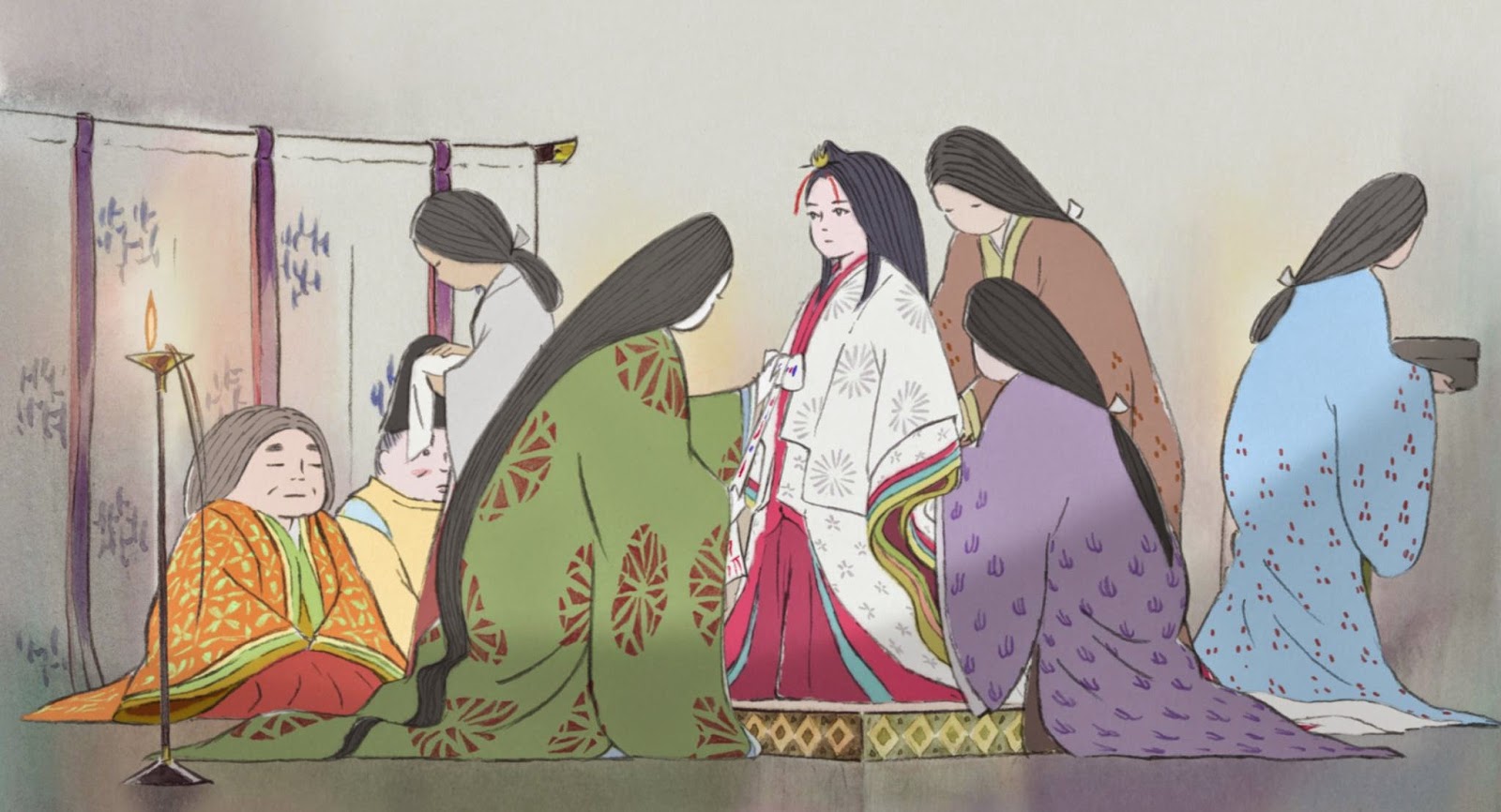 One day, the bamboo cutter discovers gold in the shining bambbo stalk, and in another day he finds adorable silks. He takes this as a gift from heaven and tells her wife that they had to build a mansion in the town to give the real princess life for the girl. The princess is soon taken to the capital. She is overwhelmed by the wealth and palatial estate, but she greatly misses the vibrancy of life in the countryside. She is placed under a strict governess Lady Sagami. The lady teaches the ways of royal lady. At the coming-of-age ceremony, the princess is named ‘Kaguya’. From then on, she is hidden inside her chamber. She yearns for individuality, while in the outside world the news of her beauty spreads like wildfire. Noblemen treat her as a rare treasure that needs to be claimed. The story takes a surrealistic turn when Kaguya’s sadness becomes too much to bear. 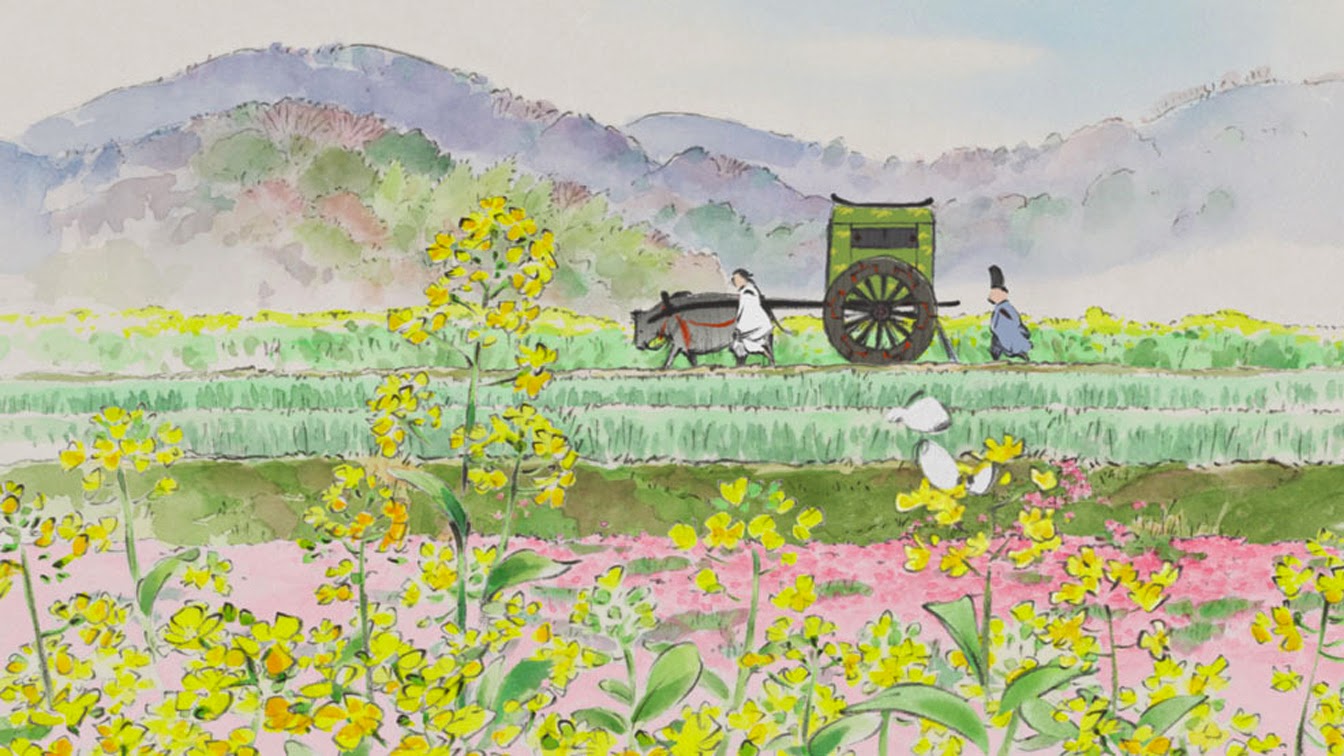 “Kaguya” depicts the spiritual emptiness imposed by parents on child, telling them that it’s only for their betterment. It presents how the elders force their cultural notions or false sense of happiness on the spirited children (as Kaguya tells towards the end:"The happiness you wanted for me was hard to bear"). The tragedy inherent with the tale is that the rebellious Kaguya goes along with her parents’ plan because of the love she feels for them. The obstinate father (bamboo cutter) also does these deeds out of love for his daughter. The story also indicts at the community’s very narrow-minded idea on female happiness. Although, it is a 10th century tale, these two themes may never seem outdated.

The preternatural roots of Kaguya are revealed subtly in the films’ last thirty minutes. If you don’t know little something about the origin story or medieval Japan’s culture, then you couldn’t fully get the tale’s nuances. Still this last act is far away from being confusing and only adds poignancy. The animation in this last act has some striking sequences, especially the arrival of moon people with their troops, playing upbeat music looked magical, powerful, and so heart-wrenching (the dream of flight sequence is also outstanding). Takahata’s gradual shifts in visual style give an endearing experience. The muted colors and the fragile images gel finely with the tale’s main theme of loss. The impressionistic images of black lines in a dreamy sequence of escape wonderfully highlights the frantic emotions of our protagonist. 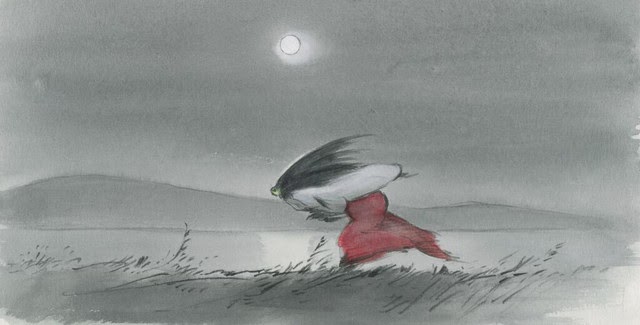 “The Tale of the Princess Kaguya” (137 minutes) possess refined metaphors, thought-provoking observations, and breath-taking images like every other Japanese anime feature. It serves as a plaintive critique on society’s age-old idea of what constitutes to a girl’s happiness.

Lovely from the start