’71 – A Naive Soldier in a Nefarious War Zone 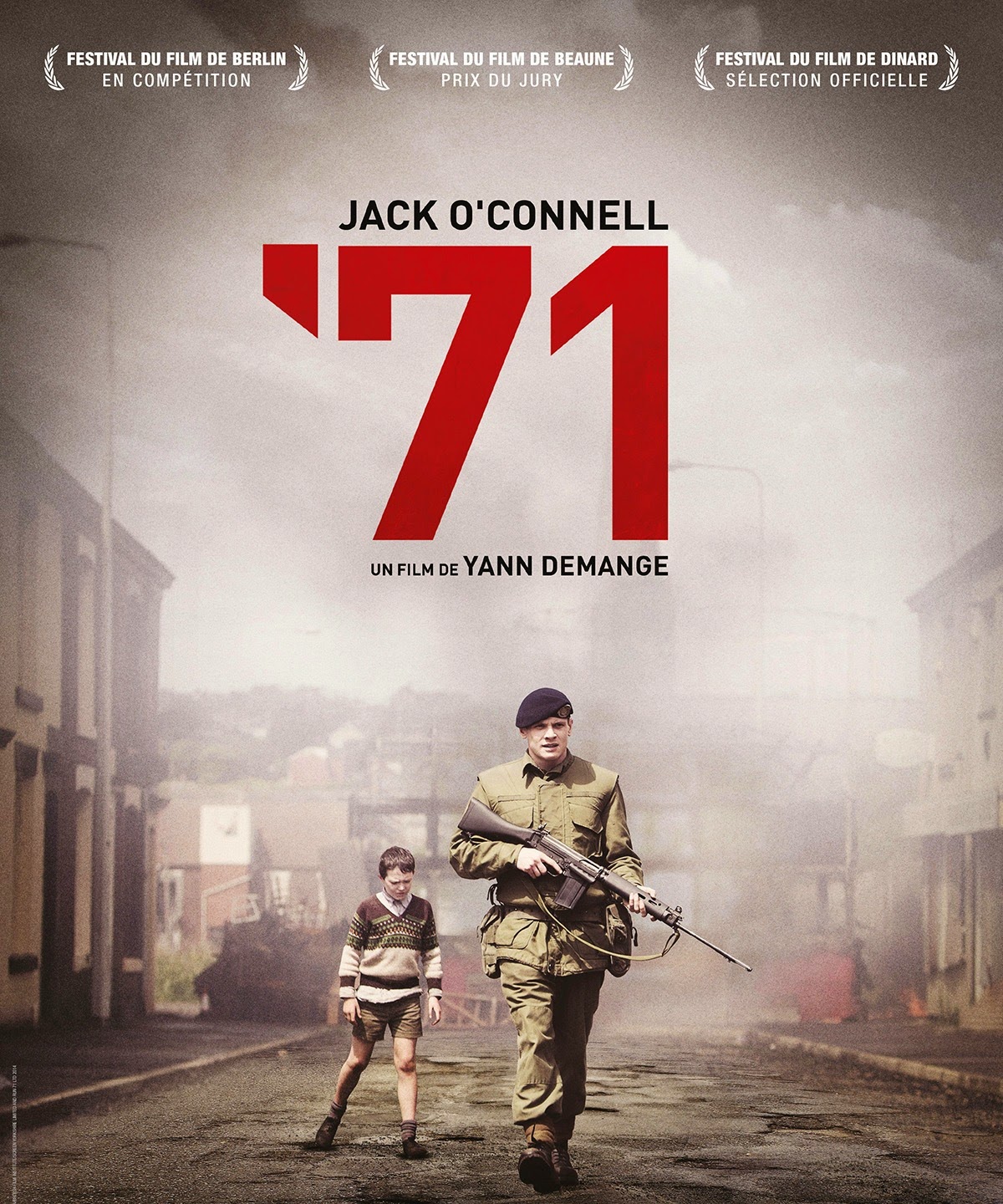 It is often considered coarse or exploitative to imbue white-knuckle entertainment into harrowing real life historical events. We have had movies like “Black Hawk Down”, “Peal Harbor” and “Lone Survivor” etc, which are set in a real, vehement historical context. But, these Hollywood products with great action set-pieces usually exploit the history to fit within the confines of American propaganda. These films don’t delve deeply into historical context, but rather weaves a central romance story or a character of trigger-happy, patriotic hero for the sake of cutesy mainstream entertainment.  But, of course there are few film-makers, who make an effective thriller without compromising on the events’ political and moral ambiguities. Paul Greengrass (“Bloody Sunday” “Bourne Series”) is one of the recent film-makers to keep us on the edge-of-the-seat by paying enough attention to the gritty realistic background (shaky-camera aesthetic and broad characterizations). Yann Demange’s feature-film debut, “‘71” (2014) is one such intricate period-piece, whose thrills and suspense are genuinely earned.

’71 is set in Belfast, Northern Ireland. The conflict usually called as ‘The Troubles’ started in the late 1960’s between loyalists/unionists (protestants), who wanted Northern Ireland to remain as part of UK, and republicans/nationalists, who wanted to leave the UK and join a United Ireland. The presence of British Security Forces only escalated the conflict to a three-way guerrilla warfare (conflict lasted for nearly three decades (1969-1998), claiming more than 3,500 lives). The movie starts off as a character drama, where in 1971 (a year before the ‘bloody Sunday’ massacre) a new recruit gets shipped off to Northern Ireland. 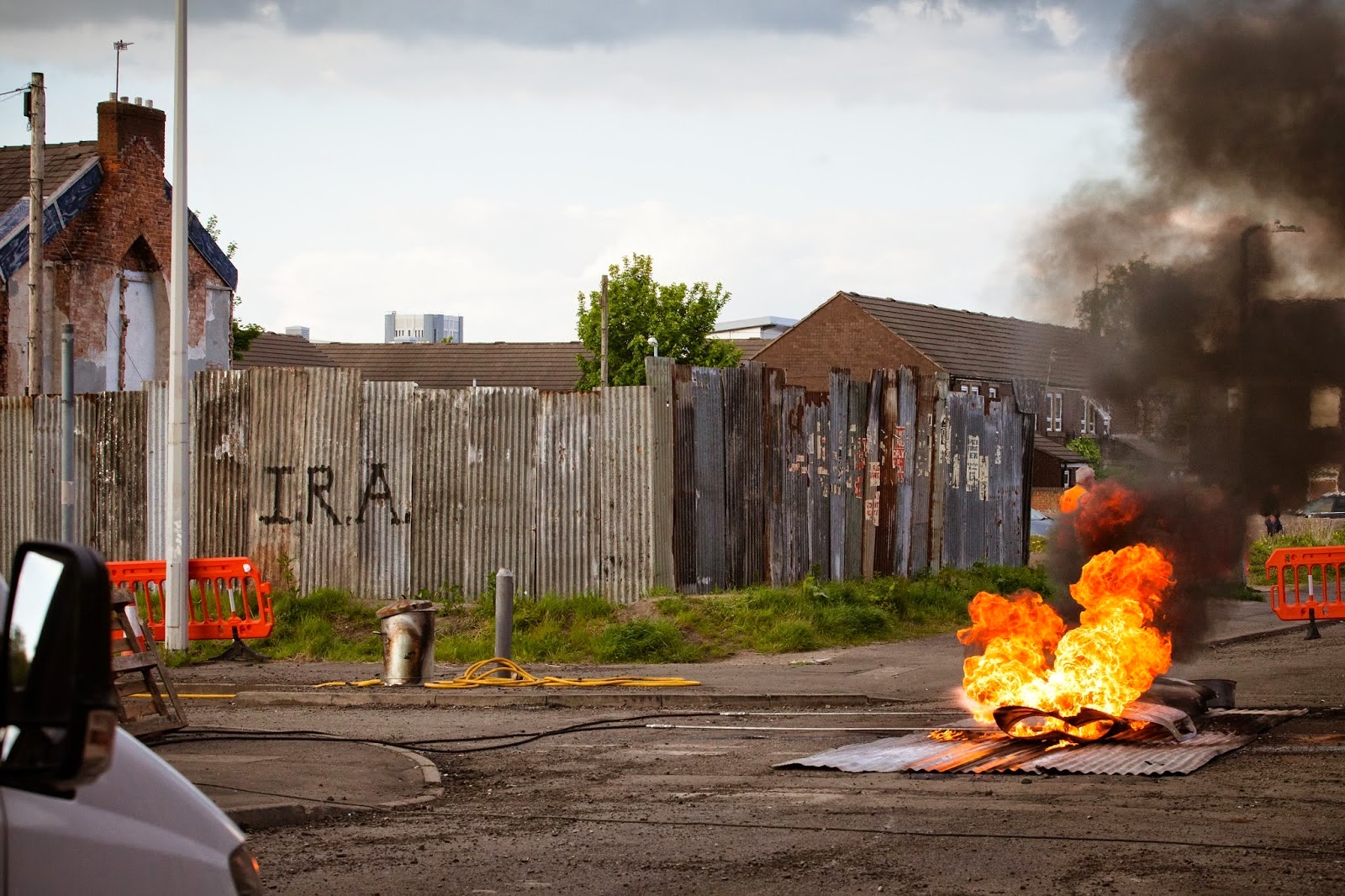 Gary Hook (Jack O’ Connell) is a young soldier from Derby-shire, who was first seen boxing against a fellow soldier. The instructor in the background says “Take it and give it back”. It pretty much resonates as an instruction to British soldiers on handling the Northern Ireland issue. Later, a commander announces that Gary and his unit are about to shipped to Northern Ireland (“You’re going to Belfast. You’re not leaving this country”). Gary doesn’t say much about himself, but we could guess that he had grown in an orphanage, and has a younger brother locked up in the same orphanage. Technically, they might traveling within their country, but in 1971, Belfast was the violent outpost of Britain Empire, whose locals welcome the British soldiers by literally flinging feces and piss. On their arrival, Gary and his unit are garrisoned on a local schoolhouse. The unit’s next day assignment is to search the nearby Catholic neighborhood, for weapons and such. 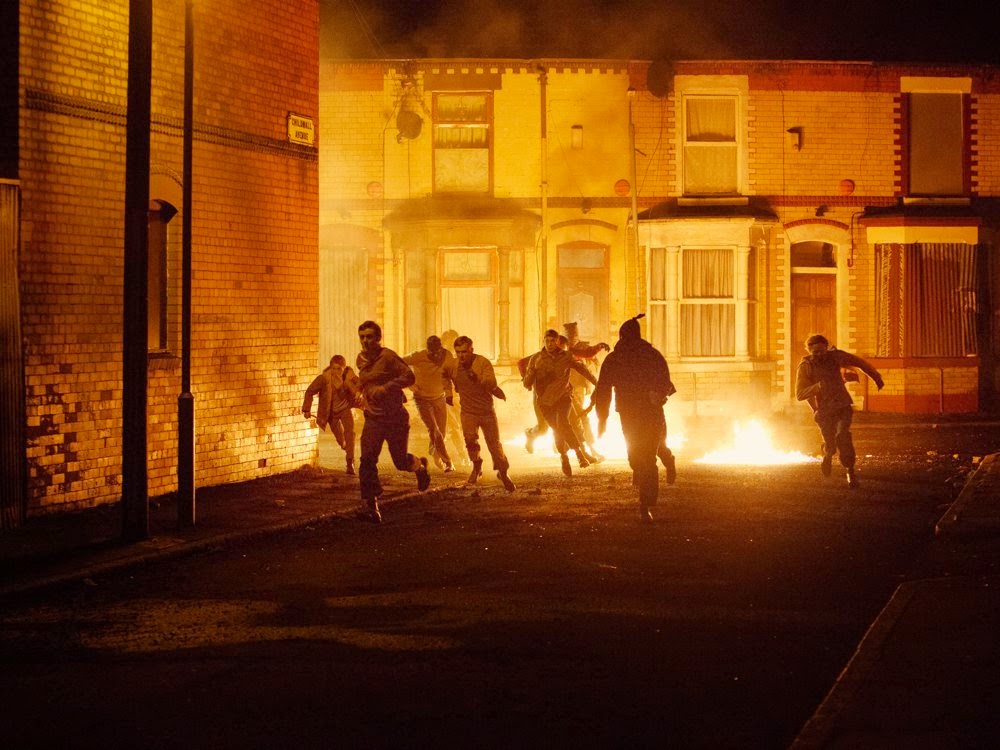 The soldiers take all the precautionary weapons that might come handy in a riot. But, their friendly and little inexperienced commanding officer (Sam Reid) asks them to chuck the riot gears (“We need to reassure people. We need to look them in the eye and tell them that”). The British wanna-be peace-keepers, wearing berets and carrying a gun is met by the most hostile lot of Northern Ireland. The search operation quickly escalates into a riot and Gary Hook finds himself caught in the enemy lines with a fellow soldier as the panicked commanding officer leaves them. Gary’s comrade is shot at point-blank range by the IRA, but somehow Gary manages to escape by running into labyrinthine streets of the city. Now the Private veers between protestant and catholic neighborhoods as he is hunted by IRA gunmen. The British plainclothes intelligent operatives also search for Gary, but they carry a more sinistral agenda.

The visual elements of ’71 are inspired by entertaining nocturnal thrillers of the 70’s like “The Warriors” and John Carpenter’s “Assault of Precinct 13”. The pulsating soundtrack and director Demange’s claustrophobic, street-level look of Belfast perfectly puts us inside the unpredictable, volatile situation of the conflict. Demange steadily builds the dread as his protagonist walks through narrow brick alleys. The break-neck chase and stand off between the two factions could have been easily turned into popcorn thriller elements, but the director never leaves out the gritty realism. He makes us feel the shocking violence without taking a political grandstanding. ’71 is also one of the rare modern action/thriller that tries to portray the scarred psyche of men, who are forced to kill for some political ideology. When Gary Hook kills a pursuing gunman by plunging a knife into his chest, he sits by his side and feels for what he has done. So, we know that he is not a regular action hero, who is hell bent on killing the bad guys to survive. 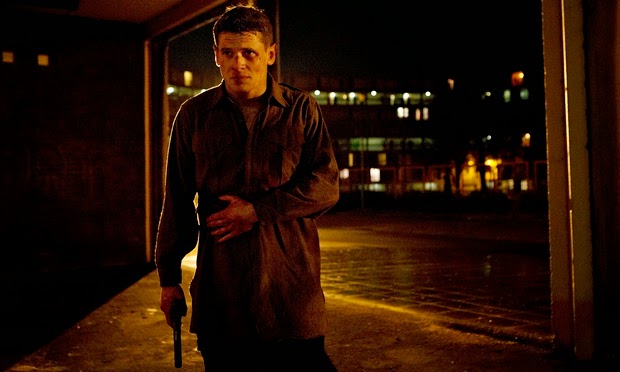 The script by Gregory Burke presents us with a lot of nuanced characters, who couldn’t be categorized into good or bad. The teenage IRA member, Sean (Barry Keoghan) is very determined to kill the British soldier for a larger cause, but when he comes face to face with Gary he just stands still. Amongst all the explosive happenings, the script takes little time to show us Sean caringly teaching his young sister. There are also ample situations that showcase how the innocent civilians are caught in the middle: a woman stop the youths from the beating up the British soldier; an ex-army Medic treats Gary’s wounds, despite knowing that it could only bring trouble. The guy even provides a different and universal insight on army & war (“Posh cunts telling thick cunts to kill poor cunts”). Of course, neither the characterizations nor the visuals are very original, but the diffusion of such elements within an action/thriller framework is a little miracle. 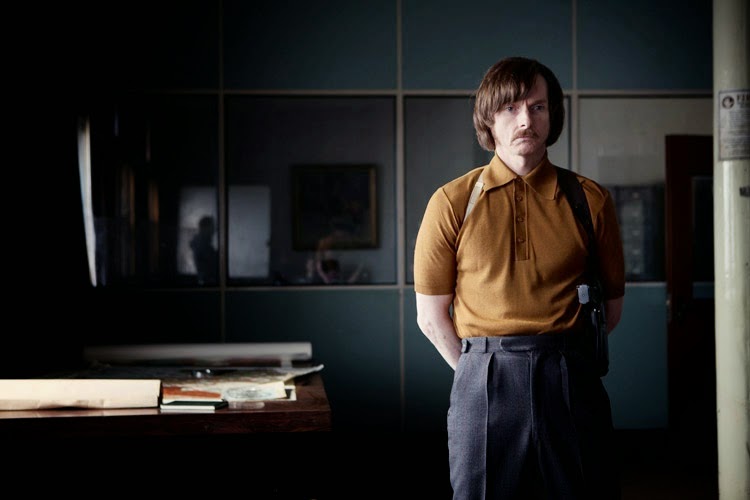 In reality, the different factions inside Belfast and their goals, conflict aren’t easy to comprehend, but here, Demange simply establishes the dispute by only demonstrating the factions’ immediate plans. The even handed approach of the complex politics behind such conflicts were all wonderfully approached by Gillo Pontecorvo’s masterpiece “The Battle of Algiers”. Demange and writer Burke doesn’t try to emulate the emotional or ideological complexity of the classic (it’s not such an easy task), and so the scope and achievement for ’71 is little limited. Despite its lack of political bias, the movie’s third act remains predictable, and never gives us than encompassing feel. However, within this limited compass, a lot is achieved and transcended. All the performances pack a punch (including Sean Harris’ shady operative). Jack O’ Connell as Gary wonderfully conveys his dread and confusion only through expressions. He is quiet touching here than he was in “Unbroken”.

“’71” (99 minutes) is a tense, ‘behind the enemy lines’ thriller, which is inter-weaved with intricate and grim realism.