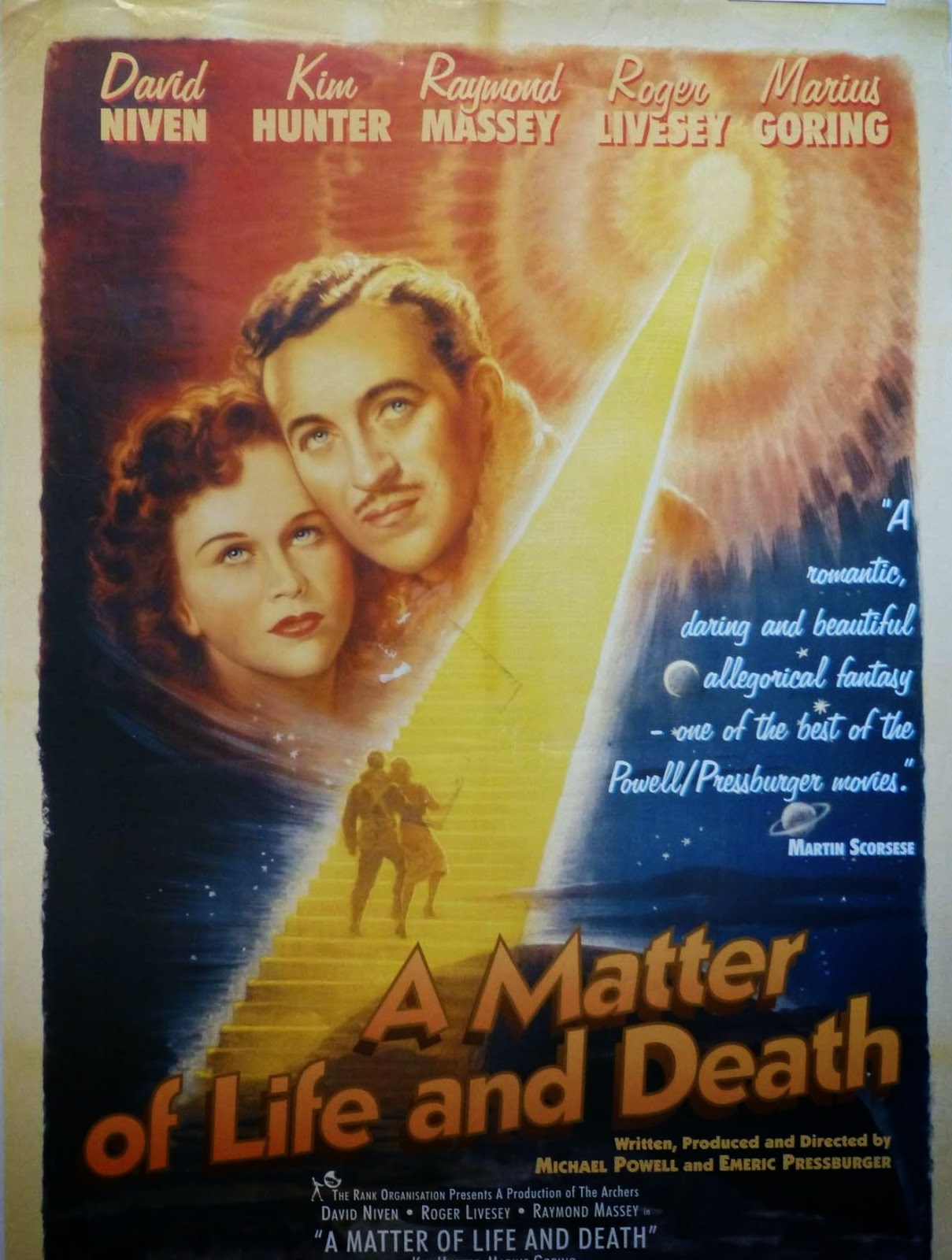 Right before the end of Second World War, British director Michael Powell and his longtime collaborator Emeric Pressburger took on a project which would encourage the new found alliance between US and Britain. The primary concern was to convince the audiences of both nations that friendship between upstart America and waning imperialist Britain is necessary and beneficial, despite earlier conflicts and tribulations. Nevertheless, the fable “A Matter of Life and Death” (1946) directed by the British film-making duos isn’t a insipid, brash propaganda flick, but rather arose to be  a imaginative visual feast, which is still being loved and earning fresh  audiences all over the universe. This quirky wartime film also marks the feature-film debut of legendary cinematographer Jack Cardiff.

The film has an exciting opening sequence for its time, where the camera tracks down through the universe (“This is the universe. Big, isn't it?”) to show our planet spinning into view, and to the stricken fighter plane of RAF pilot Peter Carter (David Niven). Apart from the fact that Peter’s plane is shot down, his engineer Bob (Robert Coote) lays dead and their parachutes are shredded. The other men of the crew have bailed out and Peter tries to raise his command on the radio. But, he falls head over heals after hearing the voice of young American radio operator June (Kim Hunter). He shares his last moments with her and tears wells up inside June as he feel helpless in the control tower. Even at the throes of death, Peter jokingly says, “I'll be a ghost and come and see you”. June also tells that she would loved a man like him. 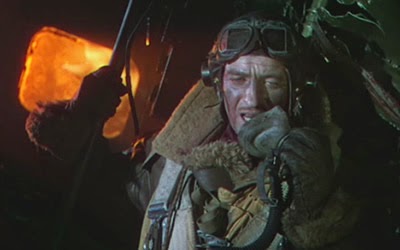 After the emotional exchange, Peter jumps from his plane without parachute and suddenly the images cuts over to black & white from Technicolor as we see Bob waiting in some sort of huge terminal. Bob is waiting for Peter, while the rest of crowd are signing up and receiving their wings. An entire American crew shows us and they are elated to find a coke machine even at ‘heaven’. Peter, presumed dead, however awaken on a British beach. He even that he has reached heaven, but when he learns about his miraculous survival from the jump, Peter immediately approaches June. They joyously embrace and an inconceivable romance blooms. Unfortunately, the leaders of heaven looks into the error they have made on Peter, and send an elegant French aristocrat Conductor 71 (Marius Goring) to interrupt the nighttime picnic of June and Peter. 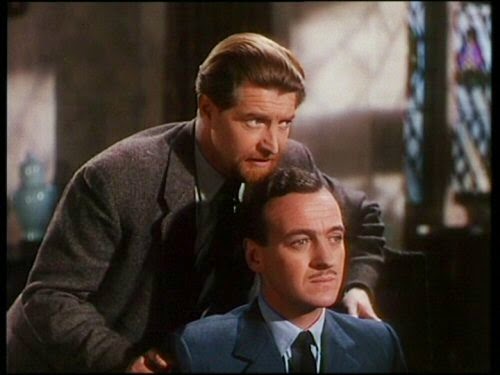 The Conductor stops the time from moving and is visible only to the eyes of Peter. He informs about Peter about the grave mistake and asks him to join his comrades in heaven. Peter doesn’t relent, asking for an appeal to the higher beings. He claims that he has found a love of lifetime in this extra time. When Peter shares his experience with Conductor to June, she is alarmed and seeks the advice of friend & doctor Reeves (Roger Livesay). Meanwhile, Peter is overcome with headaches. He becomes obsessed and distraught over what the decision of heaven would be. Dr. Reeves (an expert in neurology) approaches Peter’s visions as hallucinations from his near-death experience and diagnoses that only surgery could help Peter. 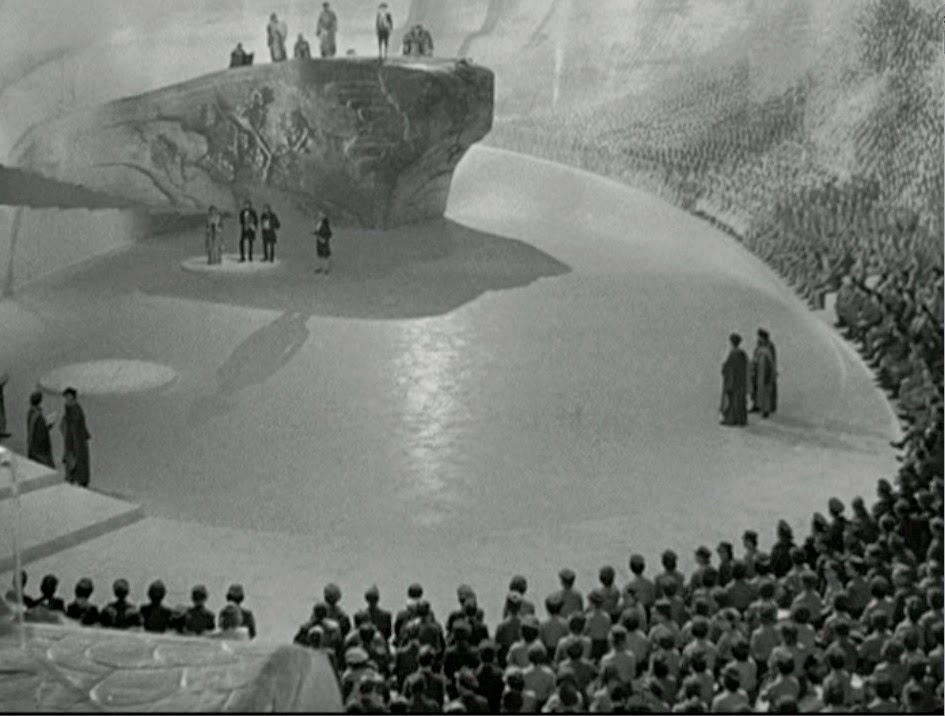 The greatness of “A Matter of Life and Death” is that it doesn’t give us any definite answers about Peter’s hallucination or Reeves’ diagnosis. It is left to us to decide on whether it is real or a brilliant figment of imagination. Whatever one’s take on Peter’s visions might be, no one can deny the visual treat the movie provides us with. Directors Powell and Pressburger with the help of production designer Alfred Junge and cinematographer Jack Cardiff have overturned our preconceived visions on how heaven would be. The heaven, in the film is bathed in a steely monochrome and politically the place looks like a huge, efficient bureaucracy. It is egalitarian, but still remains segregated. Even the celestial beings desire for the gorgeous, ‘Technicolored’ Earth. The other great visual ideas includes: the convening of celestial court inside a amphitheater than extends into infinity (resembling an eye of galaxy); a giant marble staircase to heaven, which moves like an escalator and on the one side of staircase, there are big statues of great men from Earth; Dr. Reeves’ camera obscura to surveil the village; the shot from the inside of Peter’s eyes, slowly closing as general anesthetic is applied.

Apart from the stunning visual ideas, the script from Powell and Pressburger is filled with infectious humor and inoffensive wit. The script runs from being a romance to melodrama to a buddy movie and even a courtroom drama. The stylized magnificence of Jack Cardiff guides us through sleight of hand situations. The acting isn’t a bit tedious, considering the way we generally see the performances of old actors. Kim Hunter and David Niven win you over in the way they showcase their restrained emotions. Roger Livesay was terrific as Reeves and some of his lines are the quotable ones: “A weak mind isn’t strong enough to hurt itself. Stupidity has saved many a man from going mad”. 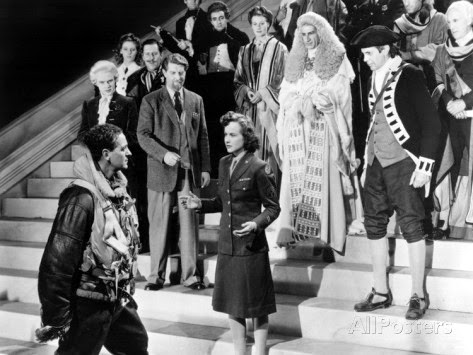 If there’s a flaw in the storyline, it only shows itself in the essential propaganda portions. In the dialogue-heavy, appeal scene, prosecuting lawyer of heaven, Mr. Abraham Farlan argues that the Brits and Americans are so different – have little in common – that such union could not exist. Dr. Reeves of defense counsel cites the relative merits of such union. The scene gradually disintegrates into abstract, loyal sermonizing. The speech goes as far as to prove the audience (at the risk of losing its focus on characters) that the Britain Empire isn’t an old relic and it’s not washed up. However, the director duos at last come to the matter at hand, devising an ultimate test for Peter and June to showcase their true love. It is a poignant ending, the one which somehow makes us to overlook the earlier conspicuous patriotic sermon.

“A Matter of Life and Death” (104 minutes) is a genuine classic with a heartfelt story, innocuous humor and beautiful imagery.  If you are movie-lover, then this film is the right place to start exploring the works of Michael Powell and Jack Cardiff.

I saw this film with a different title.

Same storyline can be seen in a Shivaji and Rajani film.

The movie was released on title "Stairway to Heaven" in US. The French guy was played by Marius Goring, an English actor. He played an vital role in "Red Shoes" (1948) too. Yeah, the same story lines have been used in our film industry too, but they are loathsome remakes of this classic.

Can't complain about the remakes, cause that's how our film layout is. :-)

Back to this film, it had good sets or art direction and exceptional use of lights. Especially, the stairway scene and almost the entire heaven was serene.

I read that the celestial escalator took £3,000 to build in '45. Even if we don't like the storyline, it could be enjoyed especially for its art direction, editing, and photography.

Hey do checkout and participate in my #Blog #Giveaway at http://www.hautekutir.com/2015/03/blog-giveaway-review-of-deco-windows.html