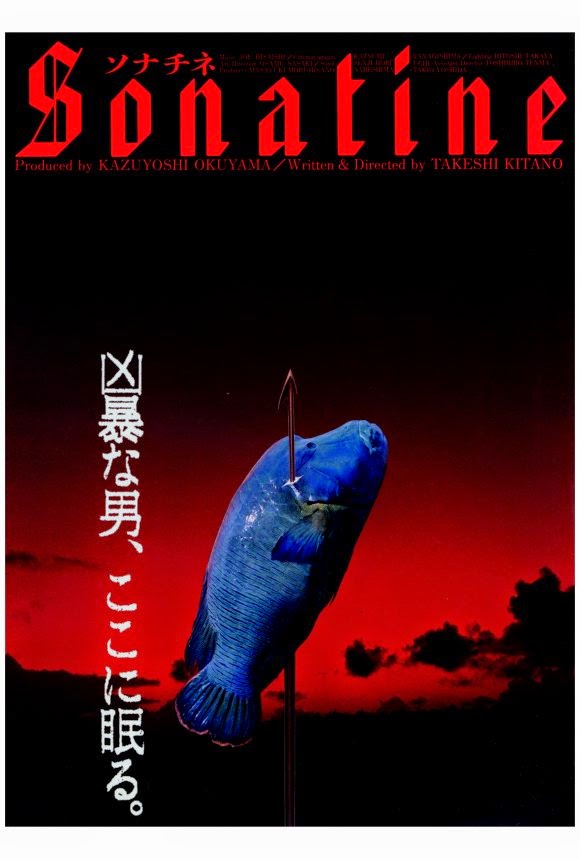 The brute magnetism, Japanese film-maker & actor Takeshi Kitano embodies neither needs a detailed explanation nor is bound to particular nation. The ‘tough loner’ character he plays was once an archetype created through action/adventure films, which nowadays has become a stereotype. The silent, gun-toting strangers of spaghetti westerns became redundant as most film-makers only tried to weave a good action set-piece around such characters. Only few directors had the patience to explore the soul of those implacable men (Jean-Pierre Melville’s classic film “Le Samourai” (1967) immediately comes to my mind). Takeshi Kitano is one of those directors, whose look at cops & gangsters is both explosive and meditative. Kitano doesn’t have the looks of an ingratiating hero like Clint Eastwood, or Chow Yun-Fat. However, his stoic face and Samurai-like demeanor allows us to accept him as the ‘existential hit-man’.

The diabolic, violent persona of Kitano’s characters made me hard to comprehend the fact that he is actually a wisecracking stand-up comedian. He is also a painter, writer, and star of many Japanese TV shows. Kitano signaled his arrival with the artistic endeavor “Violent Cop” (1989). “Sonatine” (1993) was his first best flick to cement his reputation as one of Japan’s most exciting film-maker (“Hana-bi” (1997) is my personal favorite). With “Sonatine”, Kitano took the generic gangster tale and imbued an unforeseen, poetic style befitting the art-house fares. So, the non-chatty, glacial pace of Kitano may not gel well with the mainstream audiences seeking entertainment. 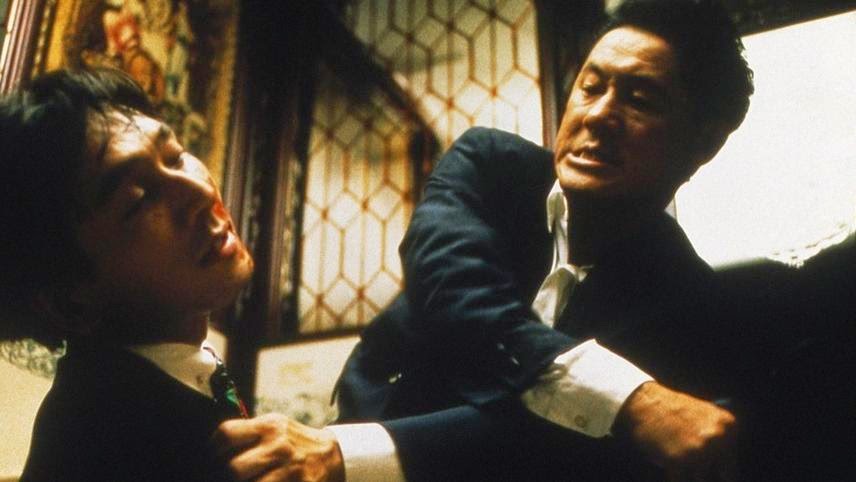 “Sonatine” is basically a fish-out-of-water tale. Mr. Murakawa (Kitano), an aging, high-level yakuza guy, who has lost the interest in his life style and job. Murakawa and his henchmen successfully run the streets in his designated turf. He hungs a shop-owner, who won’t pay money, in a crane and dunks him repeatedly under the water, contemplating on how long a man can hold his breath under water. At this point, we know that Murakawa is deadened by his killing profession, and that he doesn’t care about exorcising personal demons. Soon, Murakawa and his gang are set to Okinawa by the Yakuza boss to resolve a turf conflict. 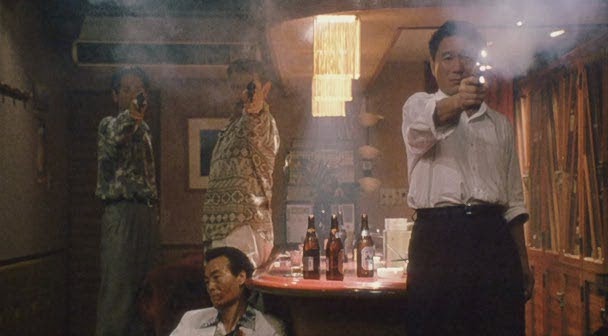 Although he is unhappy over risking his men’s life over a trivial matter, Murakawa accepts the job. Only later he understands that the boss has a hidden agenda behind the Okinawa job. After a bloody ambush in a bar, the gang’s survivors retreat to a remote beach house to lay low and to mull over their next move. The placid place has a profound effect on these gun-toting men. Murakawa and his men engage in child’s play to keep off the boredom. He creates concealed sand-traps and laughs when men fall into it. One of the henchmen asks, “Boss isn’t too childish?” for which Murakawa replies “What else can I do?” Murakawa even finds romance as he saves a young woman from being sexually assaulted.  But, good things don’t remain for too long, and soon all hell breaks loose. 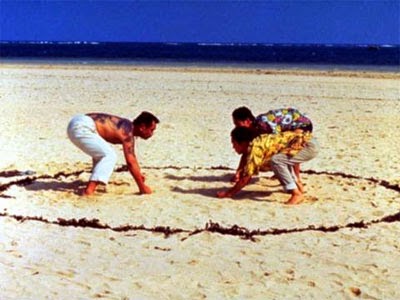 On paper, “Sonatine” has one of those cliched stories. Many audiences may find the middle part of the film as tedious. It doesn’t have a dazzling gun play like the one in John Woo’s. The hero doesn’t say any memorable one-liners before finishing off a guy. Murakwa doesn’t even let out his rage like Al Pacino’s Tony Montana. These are the basic things we have come to expect from a typical gangster flick. But, here these hardened guys play a different variant of rock-paper-scissors; dances like geishas’ and play war with fireworks. Apart from the lack of quintessential M TV style edits, the film even has various shots of clouds and fish jumping out of water. It’s no wonder that the audiences’ grown up watching American gang-war would be seriously ‘offended’ by Murakawa’s antics. But, if you could invest yourselves in this Zen-like narrative and identify the transformations an aging gunman goes through in his life, then “Sonatine” (and other Kitano’s traditional films) could reveal itself as a subtle, sensitive, and sharp study on hardened criminals.

The trivial and childish things the gangsters do fend off boredom in the beach-house comes off as poignant and humorous. Through the childish games, Murakawa and his men revert back to childhood, because these guys have nothing else to revert back to. If you are appalled by this behavior, it’s only because you have seen these guy s doing blood-curdling deeds. Kitano always imbues dichotomies into his characters, and so each player in “Sonatine” possesses that dichotomy – stoic heart and an infantile mind. 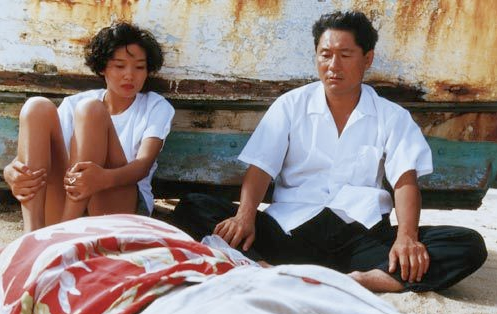 The other interesting thing in “Sonatine” and other Kitano movies is the way his characters react to violence (when it is inflicted on them or others). Towards the climax, a hit man carrying fish-tackle pumps a bullet into one of Murakwa’s men playing Frisbee in the beach. Murakawa and his girlfriend are sitting in the shade of a boat, hidden from the killer’s view. In a typical Hollywood or Bollywood flick, the reaction would be to grab a gun and shoot at the killer. But, Kitano in an unorthodox manner goes for the close-up of Murakawa and the girl, whose faces are emotionless. In an elevator and bar shoot-out scene, the innocent by-standers don’t scream; they just stand with a stoic face. I found this minimalist and deadpan behavior as bizarre, but some western critics have pointed out that through these behaviors, Kitano is trying to make statements about reserved nature of Japanese society. 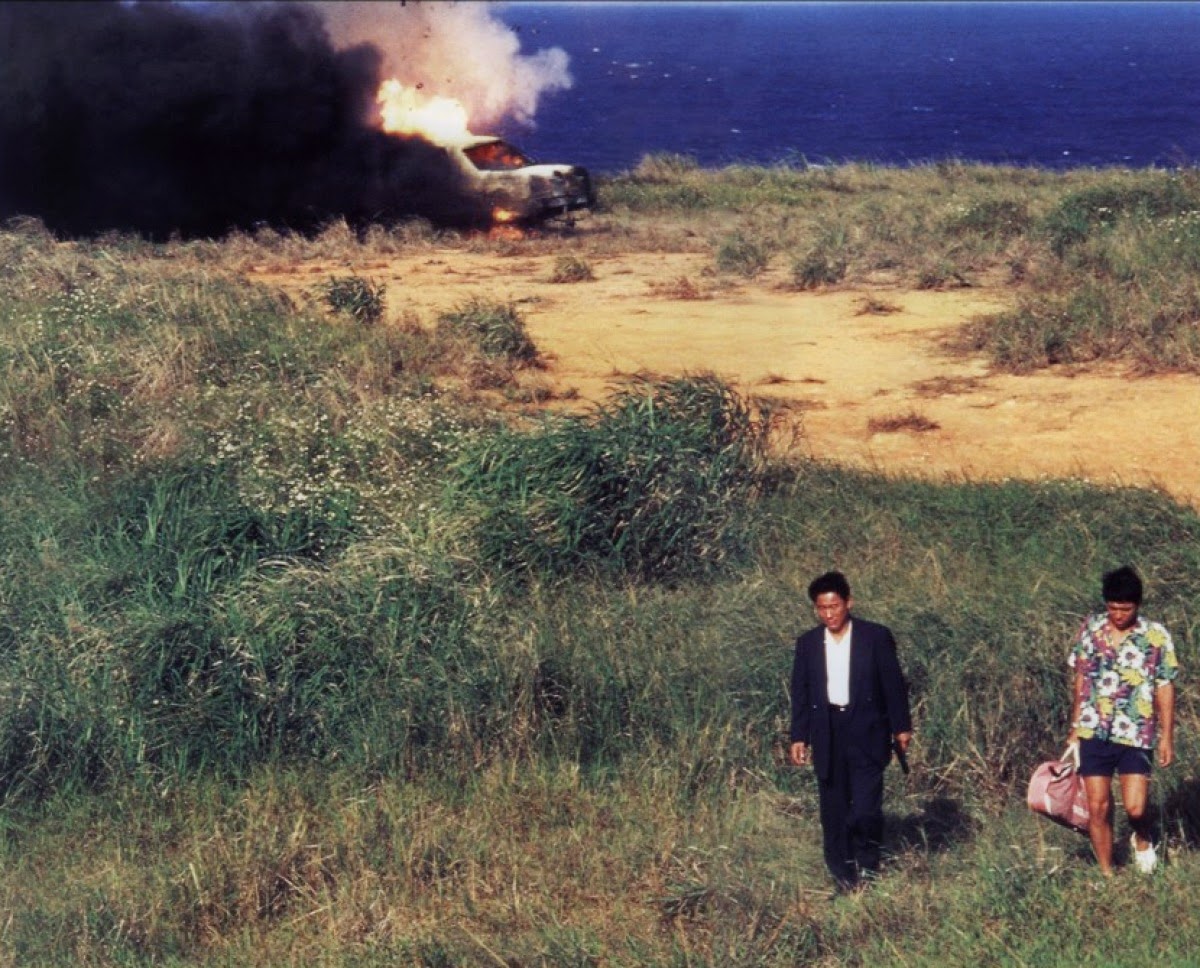 The characters doesn’t talk much, but when they talk there is a Zen-like, contemplative touch.Miyuki, the young woman, who has a thing for gunmen, asks Murakawa, “not being afraid of killing people means not being afraid of dying yourself, right?” to which he replies, “I wouldn’t carry a gun if I were tough”. She says, “But you’re not afraid of dying?”, for which Murakwa replies, “When you’re scared all of the time you almost wish you were dead”. That’s the kind of statement, you couldn’t extract from the mouth of gun-toting action hero of mainstream cinema. Kitano is known for his directorial approach for holding the shot for few seconds after the unfolding of a significant event. He leaves us with an impassive face or empty beach or clean alley to contemplate on the things we have just experienced (leavening the fact that life goes on as usual even after a bursting gunfight). Kitano’s favorite composer Joe Hisaishi offers a amazing, simplistic score, which befits the on-screen actions perfectly.

“Sonatine” (94 minutes) is a truly unique, under-rated work from Takeshi Kitano, who imbues existential musings into the gangster cinema.  It has a haunting as well as poignant visual framework which will grow on you in the repeated viewings.